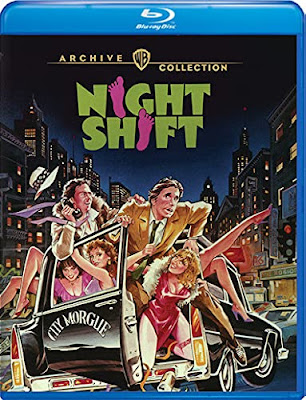 As lightweight as it can be, Night Shift (1982) is a notable film for many reasons: it was Ron Howard’s directorial debut and Michael Keaton’s break-out role, in addition to being an opportunity for Henry Winkler and Shelley Long to show other facets of their talent in the era where they were playing their most famous television roles (Happy Days and Cheers respectively). I watched the film on a new Warner Archive Blu-ray and found that while it hasn’t dated well in a lot of ways, it’s a decent showcase for its stars.
Winkler is Chuck Lumley a burned-out Wall Street drop-out who finds life easier to take working the night shift at the city morgue. He’s a timid and terrified man, refusing to ever stand up for himself or recognize that he’s not really in love with his neurotic, food-obsessed fiancée. When the irritating but oddly alluring Bill Blazejowski (Michael Keaton) starts working with him, he shakes up his life in an often uncomfortable, but ultimately necessary way. Part of the shake-up involves Chuck's neighbor Belinda Keaton (Shelley Long) a sex worker in peril because her pimp has been tossed through a basketball hoop, from several stories up (as is depicted with an oddly humorous tone in the opening scene).
Bill suggests that he and Chuck provide protection, fair wages, and a better life for the women Belinda’s pimp has left behind. It’s a terrible idea, but the immediate benefits conceal that from all. The view of relationships, women, and sex work here is solidly 1982.
The score is equally lacking in progressive artistry, at least from the start. Burt Bacharach was a genius, but the music in the first half of the film feels like several cheesy variations on Raindrops Keep Fallin’ on My Head. When the focus shifts to romance though, an early instrumental version of That’s What Friends are For (a few years before it would be a monster fundraiser for AIDS research via Dionne Warwick and Friends), and which Rod Stewart sings in the closing credits, beautifully enhances the gentler aspects of the film.
While Winkler comes off as a little bland, he’s also sweetly relatable in the way he does his best, but gets overwhelmed by the world around him. Keaton plays a character who should be unbearable, but he’s got this alluring energy which sells you on him no matter how grating he can be. Every charismatic quirk that would make him a star explodes here, announcing a star with an inevitable rise. Long is equally charming and I wondered, as I often have, why she didn’t get more of a chance to demonstrate her appeal in this way in the movies (while she had a couple of flops that sank her film career in the eighties, the famously easygoing Winkler’s later comments about finding her difficult to work with might also offer a clue).
Overall it’s a charming, light comedy romance, made a little more interesting with the inclusion of great character parts, including Howard’s brother Clint Howard and the always magnetic Joe Spinell as a sleazy club owner. It’s worth a watch.
Many thanks to Warner Archive for providing a copy of the film for review.
Posted by KC