On Blu-ray: The Marx Brothers at Their Chaotic Best in Night at the Opera (1935) 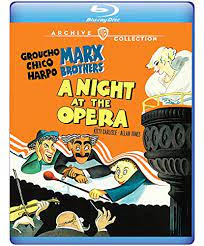 As with classics like A Day at the Races (1937) and Duck Soup (1933), A Night at the Opera (1935) showcases the Marx Brothers at their merry, anarchic best. I recently revisited the film on a new Blu-ray from Warner Archive.
The opera is the ideal setting for the Marx Brothers brand of comedy. There’s a lot to play with: the audience, the stage, and the performers, not to mention the snobbery around this art form that deserves a good Marx Brothers-style puncturing.
As an intensely self-serious patron of the arts, Margaret Dumont is the bridge into the story. In the first scene Groucho gives her a good roasting. On the other hand, the singing lovers played by Kitty Carlisle and Allan Jones, as sickly sweet as they can be, are presented as heroic artists who live to perform. However wild and unformed the brothers may seem as they roast the snobs, they are determined in their quest to let art thrive.
I think that’s why this is one of my favorite Marx Brothers films, because they never make the mistake of taking themselves too seriously, but they are also oddly valorous. Even Harpo with his impulsive mischief, as pure id incarnate, stands for something in his loopy way.
The most famous scene in the film features a tiny stateroom which becomes increasingly, and hilariously packed full of people, all of them certain they need to be there. It’s rightfully adored, but I am most impressed with the opera house finale, which features an increasingly startled audience and Harpo swinging from the rafters like a circus aerialist gone rogue. It is remarkable in the way it sustains its humor, perfectly paced, and full of gags that hit just right.
That pacing is what distinguishes the Marx Brothers. They understood how to strike a good rhythm in their comedy: where to pick up the pace, when to stick with a joke, and perhaps most importantly, when to slow down and take time with word play. For every chaotic scene of physical humor, there’s the balance of standing around calmly ripping apart lengthy theatrical contracts and discussing the “sanity clause.”
Special features on the disc include commentary by Leonard Maltin, Groucho Marx on The Hy Gardner Show, a theatrical trailer, the vintage shorts Los Angeles: Wonder City of the West, Sunday Night at the Trocadero, and Robert Benchley’s How to Sleep, and best of all, the documentary Remarks on Marx, in which Kitty Carlisle demonstrates that she may have been sweet on the screen, but she was nobody’s fool.
Many thanks to Warner Archive for providing a copy of the movie for review.
Posted by KC