Cinerama on Blu-ray: The Wonderful World of the Brothers Grimm (1962) 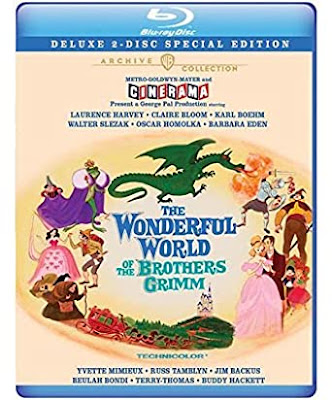 I recently had the fascinating and bizarre experience of watching the Cinerama film The Wonderful World of the Brothers Grimm (1962) on Blu-ray. The new two-disc release from Warner Archive is a colorful oddity, full of features, and with different options for viewing to make up for the impossibility of replicating the experience of watching this kind of format at home.
Three lesser-known tales from the famed brothers are woven into a somewhat fictionalized mid-life biopic of the pair. Laurence Harvey and Karl Boehm play the Grimms, while Claire Bloom and Barbara Eden star as their love interests, wife and intended respectively. They’re all appealing enough in their roles, though these sequences can drag.
While Henry Levin directs the framing story, stop-motion genius George Pal directs the fairy stories. Pal did his best work with charming, fanciful creatures, and this was a great progression from his work in Tom Thumb (1958). He injected a sense of play into his creations that lightened even the most perilous scenes.
The fairy tale sequences are, unsurprisingly, the most intriguing. My favorite was the first, The Dancing Princess featuring Yvette Mimieux and Russ Tamblyn. It’s a romantic story of a restless princess (Mimieux) who escapes to the forest at night to dance with the lively members of a caravan. Tamblyn is a woodsman the king (Jim Backus) enlists to find out why his daughter’s slippers are soiled and worn each morning. Mimieux is perfect as a young royal who wishes to burst out of the confines of her life and Tamblyn gets some, if not enough, opportunity to show off his acrobatic dancing skill.
Though mostly played for comic effect, The Singing Bone has its share of eerie moments, which gives it a bit of edge. It stars the perfectly-matched Terry-Thomas and Buddy Hackett and features a fantastic stop-motion dragon that is one of Pal’s best screen creations.
The least successful of the fairy stories is The Cobbler and the Elves, which features Pal’s Puppetoons. While well-crafted, the tiny puppets get lost in the wide expanse of the Cinerama frame.
While it is impossible to replicate the Cinerama experience at home, seen on the biggest screen possible you get a sense of what was intended. The novelty of the format is a constant curiosity. It never quite leaves your mind as you watch, which works with a film that is meant to be light entertainment. To a degree it makes up for the many moments where the action dips. As a spectacle with some elevated moments, it works.
Special features on the 2-disc set include multiple trailers for the film, radio interviews with Yvette Mimieux and Russ Tamblyn, the documentary Rescuing a Fantasy Classic, the featurettes The Epic Art of the Brothers Grimm, The Wonderful Career of George Pal, and A Salute to William Forman, a slideshow of images from the film, an image of the location commemorative plaque in Rothenberg, Germany, and menu access to the songs in the film.
Many thanks to Warner Archive for providing a copy of the set for review.
Posted by KC