On Blu-ray: Gene Kelly and Lana Turner in The Three Musketeers (1948) 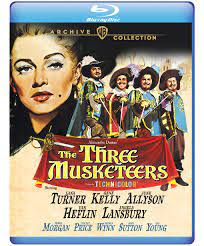 The Three Musketeers (1948) may not be one the most celebrated of MGM’s films, but it has all the best that the studio had to offer. It’s full of action, with just the right amount of humor, its stars are for the most part perfectly cast, the costumes are gorgeous, and the Technicolor lends it all an unreal beauty. I recently enjoyed all these things on a new Blu-ray release from Warner Archive which looks great and gives the film a refreshed look.
It makes sense that Gene Kelly would thrive in an action film. His bruised dance partners (and Lana Turner in this film) had stories to tell about his occasional overabundance of energy. Here he had a good outlet for that boundless physicality. He is a good fit for D’Artagnan, because while there are emotional elements, the part calls mostly for derring-do.
Van Heflin takes on the dramatic duties as Arthos and he works well with the lighter Kelly. Lana Turner is also striking as M’Lady; her role is written more to showcase her screen presence than dramatic ability, though she has her moments and lends a delightfully twisted edge to her villainous character. The camera focuses on her like a crushed out teenager and she is breathtakingly stunning in her color film debut. Vincent Price is also reliably evil, seeming to pioneer the now long-standing villain tradition of stroking a cat while plotting wicked deeds.
I always feel guilty about my dislike of June Allyson. While I can see objectively that she is talented, there’s something about her that leaves me flat. I could understand the freshness of her persona as Constance being appealing here for those who are fans, but I found her to be a mismatch with Gene Kelly.
The cast is filled out with Angela Lansbury, Frank Morgan, John Sutton, Gig Young, and Keenan Wynn all of them understanding the assignment. There’s a lot of talent to behold here.
Overall this is engaging, well-paced moviemaking. Costume dramas aren’t a go-to genre for me, but so many things go right with this production that it has an appeal which elevates it beyond category. It’s the kind of film you imagine when you think of the studio classics. Aside from the great production values and performances, the story is more engrossing because it is one of the first Musketeers adaptations to adhere more closely to the source material. It’s a good time.
Many thanks to Warner Archive for providing a copy of the film for review
Posted by KC