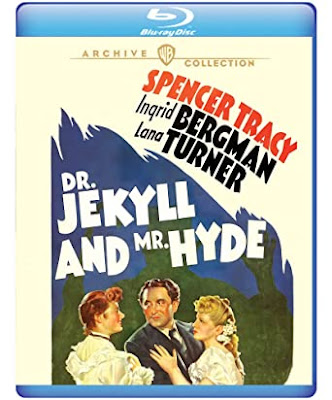 While the 1931 version of Dr. Jekyll and Mr. Hyde starring Fredric March remains my favorite, MGM’s 1941 production starring Spencer Tracy has grown on me over the years. I still find it overlong and too heavy on the dialogue, but there’s much to love about it. I recently revisited the film on a new Blu-ray from Warner Archive.
One of the most fascinating elements of this take on Robert Louis Stevenson’s Victorian tale of a scientist who brings out his evil side is that a studio known for going big with everything in its lavish productions did very little with make-up when it came to Tracy’s transformation to Hyde. His brow is darkened and his features made to look more severe, but Tracy’s acting is what makes the alter ego he plays so chilling. He perfectly embodies the dichotomy of a man, from the mask he wears as he moves in society to the more animalistic desires raging beneath that façade.
Much has been made of the casting of the female leads in this film. For some the casting of the fresh-faced Ingrid Bergman as tortured bar girl Ivy and bleach-blonde Lana Turner as Tracy’s virginal intended seems backwards. I thought that at one time myself, but I’ve come to realize that the film wouldn’t have worked had the roles been switched.
For the most part this is because the role of Ivy requires an intensity that Turner would never have on the screen. Bergman gives a deeply harrowing performance, going to frantic emotional heights that few actresses of the period would be able to match. It is an exponentially more challenging role.
On the other hand, Turner was well suited to playing the young and innocent Beatrix. This was years before The Postman Rings Twice (1946) and audiences at the time would have felt the part suited her persona. It was also the perfect role to showcase what she did have to offer as an actress.
It’s a solid trio of performances, but they aren’t in the film they deserve. There’s more talk than action, especially in the early scenes and those scenes go into far more detail than is necessary. It is here where I vastly prefer the pre-Code version.
There is a bit of that pre-Code spirit in the film’s surreal and erotic dream sequences though. Tracy’s sexual frustration is illustrated in a series of sensual and downright kinky fantasies centered on the two women in his life. How did the image of Tracy whipping Turner and Bergman as his bare-shouldered steeds made it past censors? Perhaps the scenes were viewed as art; whatever happened, it’s these moments that give the film a wild edge that is much needed to cut through the MGM-style pomp.
This is for the most part a satisfying film; Tracy’s performance alone makes it a classic.
As a special feature there is also a theatrical trailer on the disc.
Many thanks to Warner Archive for providing a copy of the film for review.
Posted by KC