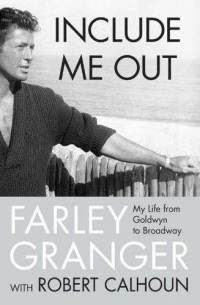 I have liked Farley Granger since I first saw him freaking out in his role as a young killer in Alfred Hitchcock’s Rope (1948). When he died earlier this year, I was surprised to realize how little I knew about him. In order to remedy this, I picked up a copy of his 2007 autobiography, Include Me Out: My Life From Goldwyn to Broadway, which he wrote with his long-time partner Robert Calhoun. Granger’s story was a lot richer than I’d expected. The book was so fascinating that I felt like I was reading a novel.

Granger’s Hollywood movies were a significant, but small part of his life. Stardom simply gave him the money and prestige to pursue his dreams of stage success and world travel. Farley Granger lived his life with honesty and vigor and never hesitated to indulge in all the opportunities his success gave him.

Here are some of the bits from his story that grabbed me:

1. James Mason was the original choice for James Stewart’s role in Rope

I almost wish I didn’t know this one. Stewart did a fine job, but he was terribly miscast. Mason had the smooth, sinister allure needed for the role of the professor who unknowingly inspires his students to kill. I’m convinced that Rope would have been a classic with Mason, rather than the solid, but uneven effort it is. This bit of information will probably gnaw at me forever.

2. He had an enduring and very flexible relationship with Shelley Winters

Winters and Granger met early in their careers and embarked upon a chaotic relationship that lasted until the end of her life. It seems to have been whatever they felt was needed at the time. For a brief while it was a romance, then a sex buddy thing, then a friendship. They were even engaged briefly, sort of, but Granger didn’t seem to mind when Winters married Vittorrio Gasman soon after they discussed the possibility.

Some of the best stories in the book are about the crazy adventures he had with Winters. He seemed to feel equal parts exasperation and love for her, which I could appreciate, because that’s how I feel about her as an actress.

3. He had his first female and male sexual encounters on the same night

I think this is the most thorough loss of virginity story I have ever heard. While Granger was in the service during World War II, he went to a private club where he had his first sexual experience with a hostess who worked there. Then he met a soldier by the pool and ended up in bed with him shortly after.

Perhaps the most surprising thing about this story is how wholesome he makes it all sound. He just seems like a playful young man having a very active night. By the end of it, he decided he would be happy to go with either team. One of the most admirable things about Granger is that he never allowed his sexuality to be an issue, even though it was certainly an issue in the society surrounding him.

4. He slept with a lot of famous people

Granger got around. In addition to Winters, his bed partners included Leonard Bernstein, Barbara Stanwyck, Rita Hayworth, Ava Gardner and the screenwriter of Rope, Arthur Laurents, with whom he had a live-in relationship early in his career. Though Granger did do a lot of romping in the sack, he was still selective and most notably turned down Noël Coward, though he clearly admired him. Once Granger settled down with Calhoun, their relationship lasted from 1963 until the latter’s death in 2008.

5. He was passionate about the arts

Music, art, opera, the stage, Granger adored them all, and his fame gave him the opportunity to absorb culture all over the world. He seems to have attended every cultural event he could over the course of his travels and he describes these lovingly in several passages of the book. His friendship with Aaron Copeland in particular gave him enviable education in and exposure to music.
Posted by KC