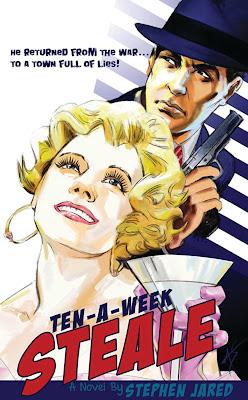 I like Stephen Jared's novels, because they're sort of like classic movies in print. In his first book, the lively and romantic Jack and the Jungle Lion, he played with the adventure genre. This time, he goes grittier and darker with the 1920s-set detective story Ten-a-Week-Steale.

The title refers to detective Walter Steale, a good-hearted, but traumatized veteran of the Great War. Steale lives on the edges of the glittering silent film colony in Hollywood. He's sweet on Virginia Joy, a clever platinum blonde who also happens to be a Harlow-like movie star with a similarily hovering mother. His brother is corrupt Lieutenant Governor Sam Steale.

Walter takes an ill-advised job providing muscle for his brother, and finds himself framed and a fugitive from the law. Things get dirty, but this detective knows dirty, and he can wrestle with the worst of them.

Though Ten-a-Week Steale is sexier and more violent than your typical golden age flick, it has the zest of a 1920s flapper pic, dialogue with a 1930s snap and an aura of 1940s noir doom. Somehow, all of that fits together. There are even movie star cameos, from Nazimova to Adolph Menjou.

The betrayed man on the run plot is familiar, but Jared gives it a boost with juicy characters and sharp wit. There are also a few novel touches. I certainly see brandy in a different light after reading a particular fight scene.

And holy cow, those action scenes! The brutal detail and twisty pacing really hit you in the gut.


Ten-a-Week-Steale is a fast-paced, engrossing story. I'd like to see more of Walter Steale and Virginia Joy. (The upcoming sequel to Jack and the Jungle Lion can't come out fast enough either!) Thank you to Stephen Jared for providing a review copy of the book.
Posted by KC