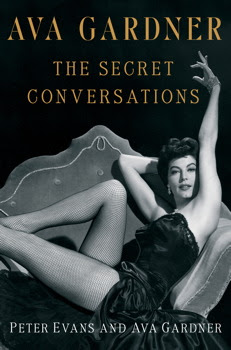 I admit it, I wanted to read the racy stuff. I've always heard that Ava Gardner lived her life with abandon, so when I read her 1990 autobiography, I was disappointed that for once she seemed to be holding back. While Ava Gardner: The Secret Conversations is far from a definitive or even comprehensive memoir, it does appear to deliver the real Ms. Ava. She shares a lot, while having the sense to not share everything, and yes, that includes the sex.

In 1988, Gardner was broke. Still partially paralyzed from a major stroke and unable to work, she decided to sell her life story, with the modest hope that she would earn enough to make the rent on her London flat near Hyde Park. She found Peter Evans, a former journalist more interested in writing his novel than documenting movie stars, and used the full force of that star power, and her seductive Ava-ness to draw him to the project.

Their collaboration was always on uneasy footing. Gardner appears to have been a loyal woman, and it must have been difficult to lay out her secrets for cash. She fretted constantly about how she would come off (she wasn't aware of how much she swore until Evans gave her some sample chapters to read) and whether she would hurt former husbands Mickey Rooney and Frank Sinatra with her raunchy, revealing tales of married life.

In the end, it was loyalty, or at least deference to Sinatra that killed the project. She found out the singer had sued Evans several years previously and immediately stopped work on the book. Eventually she told her story in a different, less revealing way in, Ava Gardner: My Story.

Several years after Ava's death, with the permission of her estate, Evans cobbled together a different book from what he had planned. He shares the few passages of the memoir that he completed, but the bulk of it consists of his memories and transcripts from the long, often combative conversations the two had over the course of their turbulent work relationship.

That tug-of-war between writer and star can get tiresome, they tangle over the same issues repeatedly, but it is as true a picture as you could get of Gardner in her late years. She missed the freedom her health gave her and the ability to earn her living as she was accustomed, but she also knew she had lived a remarkable life. Ava was a great storyteller and she describes her memories vividly.

I've always admired the way Gardner indulged her passions in an age where it was unseemly for women to do so. In fact, this attitude towards female sexuality has never gone away entirely, which makes her determination to fulfill her appetites all the more admirable. Stories of romping in the sack with Mickey Rooney (I'm still a bit baffled that he was such a ladies' man) and Howard Hughes are plenty steamy, but it's also just fun to think of this young woman finding out she loves sex and pursuing it with gusto.

While these episodes were amusing, Gardner's memories about her childhood stuck with me much longer. She talks about her rough, but not deprived childhood as a farmer's daughter with bittersweet tenderness. Her closeness to her father, and her struggle to survive alone with her mother after his death are made all the more remarkable when you think that she could barely keep clothes on her back in 1939 and was the elegantly-gowned wife of the biggest movie star in Hollywood by 1941.

There's very little about Gardner's acting career here, which disappointed me, though I never got the impression that she wanted to discuss her work in great detail. As dynamic as she was on the screen, Ava was never deeply devoted to her career. She had natural appeal and astonishing beauty, which she developed into good performing chops, and most of the time that seems to have simply served her as a great way to make a lot of dough.

Despite her depression at the time she collaborated with Evans, Gardner has plenty of joy to share. She may have lamented the way her life turned out, and how the stroke reduced her mobility, but she was never pathetic. Ava was too self-aware to fade away with her movie star delusions. She had her heyday, and she lived it up, but she didn't cling to it when those days were gone. It's just that she didn't know what to do after the rush of youth was gone.

Many thanks to Simon & Schuster for providing a review copy of the book.

Win your own copy of Ava Gardner: The Secret Conversations from Classic Movies! Click here to enter.