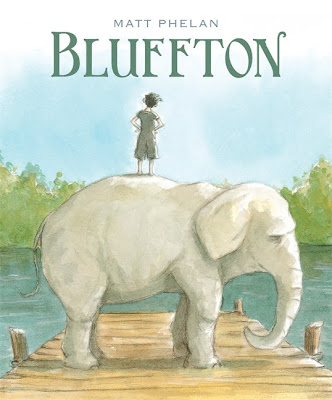 I've always had a crush on Buster Keaton. I don't find him sexy, but I moon over him. The nature of this infatuation has always baffled me, but after reading the new graphic novel Bluffton: My Summers with Buster Keaton, I think I finally understand it.

That's because Bluffton imagines what it would be like to know a teenage Buster, while he was still tumbling around the US on the vaudeville stage. It made me realize that I have a sort of twelve-year-old girl crush on Keaton, innocent, but still quite serious. It all makes sense now!

I haven't read many graphic novels, so I don't know whether this one is representative of the form. Do they typically have dreamy watercolor illustrations like these? If so, I've been missing out. Bluffton floats along like a wistful dream, making you nostalgic for a life you haven't lived.

The story begins in 1908, in the peaceful town of Muskegon, Michigan. Young Henry, son of the local hardware store owner, is startled one day to find an elephant disembarking from the train. This lumbering pachyderm is followed by an equally astonishing troupe of vaudevillians who have come to enjoy a summer by the lake, as pre-air-conditioning playhouses are too sweltering for audiences in those months. With them is young Buster Keaton, who demonstrates some serious tumbling skills on the station platform.

The group grabs a trolley to their rental cottages in Bluffton, a neighborhood on the west bank of Muskegon Lake. Henry makes his way to the tiny houses and meets Buster as he comes flying out of one of them. They make plans to play baseball and a friendship begins that lasts for several summers.

Henry spends the warm days in Bluffton, learning more about these worldly visitors and observing them at play. He watches wistfully as Buster tumbles, skips stones across the water and even woos the ladies better than he can. It burns him up to be in his shadow, though he admires him too. Ironically, Buster seems to crave a simple life similar to Henry's, though he appears to be too addicted to applause to leave the stage. Performing is a way of life for him.

Bluffton has the easy pace of a lazy summer day. I love the way Phelan lets conversations trail off, indicating the silence with a few peaceful panels. It is as if he is giving his characters room to think.

Phelan's version of Keaton is expressive, but the stone face makes plenty of appearances. He gives him a subtle personality slightly different from, but in harmony with, his screen persona. I especially enjoyed a series of wordless panels where Buster quietly flirts with a local girl. Phelan captures that simultaneously bashful and bold quality that would make the grown up star so appealing.

Though Bluffton teaches familiar lessons about appreciating what you have and pursuing your passions, it does it in such a charming way that it somehow feels fresh and new. It's also touching, and I found myself a bit teary-eyed while reading the final panels. I don't know why the publisher suggested a 9-12 year range for this book, because this beautifully told and illustrated story is appropriate for any age.

Keaton really did spend his summers with his vaudeville peers in Bluffton. In his autobiography, he said that they were the happiest days of his life. What better times to explore than those with the warmest memories?


Many thanks to Raquel Stecher of Candlewick Press for providing a review copy of the book.