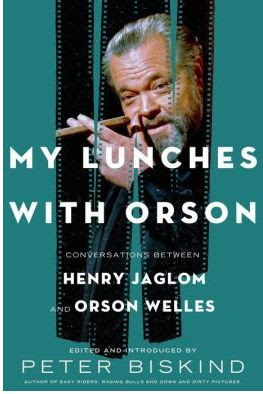 My Lunches With Orson: Conversations Between Henry Jaglom and Orson Welles
Edited and with an Introduction by Peter Biskind
Henry Holt and Company/Metropolitan Books, 2013

What would it be like to eat lunch at a French restaurant with Orson Welles? According to My Lunches with Orson, you'd get a lot of gossip, industry talk, discussions about culture and Shakespearean quotes galore. You would also be lucky to finish a sentence.

In the early 80s, Welles supposedly asked director Henry Jaglom to record several of their lunchtime conversations at the Ma Maison restaurant in Hollywood. He knew his friend had done the same with his father, capturing years of memories. His only requirement was that the recorder remain in Jaglom's bag, because he didn't want to look at the machine. Reading that may make your eyebrow pop up involuntarily, but I get the impression Jaglom was a true friend, he appears to have worked hard to help Welles late in his life. It also appears as though editor Peter Biskind had to convince him to publish the contents of the tapes.

Compiled from several encounters recorded from 1983 to 1985, Lunches is essentially one big conversation. According to Biskind, it was slightly rearranged and edited, but is true-to-life where it counts. I don't mean true either, because I don't think Welles was particularly interested in the truth. He liked to tell stories, and that is why a simple translation of his words is quite enough to make an engrossing read.

Lunches captures Welles near the end of his life, when he was still working like mad, writing scripts and scrambling to find funding to finish his many projects. He was frustrated by this uphill battle, but still loving life enough to enjoy a rousing conversation.

Hearing Welles speak for himself is exciting, because you can sense the richness of his intelligence. Here is a busy, fertile mind letting it flow. Biskind edited lightly enough to preserve Welles' voice. You can hear him booming out every word.

And it seems Welles had something to boom about nearly everyone. I stopped trying to keep track of how many names he mentioned after the first couple of chapters. He couldn't handle Bette Davis' face and he thought Brando had a neck like a huge sausage, but he was devoted to Joseph Cotton and impressed by John Wayne's good manners. His comments about his peers are more bitter than sweet, which I partly took to be a reflection of his feelings at the time, but I wouldn't be surprised if he always thought Laurence Olivier was stupid.

You may not like what he has to say about all these talented people, but he might make you think again about the so-called talents of an actor. Not only does Welles not hold back, but his opinions are unpredictable, and somehow fresh for changing your perspective, if not your mind. For instance, I've always admired Irving Thalberg, but Welles didn't, and he has good reasons for being critical of the "Boy Wonder."

Welles knew so much about his craft. He was an observer and a student, always curious and critical. This background, and the intelligence that helped him to learn so easily, was both a blessing and a curse. It's not easy being the smartest guy in the room. Sometimes it can be downright frustrating. If you've got an oversized ego as well, it can be excruciating.

Listening to Welles without a filter can be alarming, but also fascinating. His tall tales could get out of hand, and Jaglom picked up on this often, and called the director on his shaky grasp of the facts. While he'd admit to, as Homer Simpson once said, "writing fiction with his mouth," he never seemed apologetic about it. So no, this isn't a reference book, it's Welles blowing off steam and being very entertaining in the process. Maybe he didn't have the funds to make movies, but nothing could stop him from putting on a show.

Deepest thanks to Henry Holt and Company/Metropolitan Books for providing a review copy of the book.