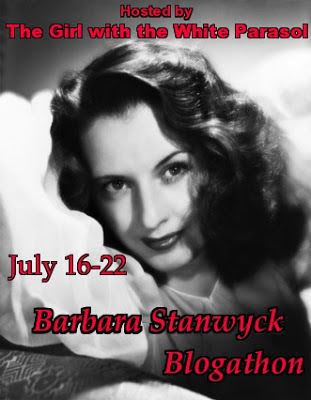 This post is my entry in the Barbara Stanwyck blogathon hosted by The Girl with the White Parasol. Go to her site to check out the rest of this amazing event.

The idea of a woman empowering herself by polishing her appearance is familiar in the movies. Just think of The Women (1939), where getting a manicure with "jungle red" nail color was as good as a battle cry. Or Joan Crawford advancing from her awkward small town ways and gingham dresses to wealth and slinky dresses in Possessed (1931).

In Baby Face (1933), Barbara Stanwyck takes the concept of dressing for success to a surreal place as Lily, a cynical woman determined to work her way up in the world man-by-man. Her simultaneously gorgeous and bizarre Orry-Kelly costumes, fanatically sculpted hair, serve as both armor and plumage in her battle to live a penthouse lifestyle.

And Stanwyck really works those clothes and 'dos. She deliberately shows her character using them as tools for her world domination. There's no joy in this woman's appropriation of fashion. Think of all the actresses who would be gobbled alive by the frocks in the shots to follow. Stanwyck slides into them like they are a second skin.

Lily hasn't got a concept of success in her first scenes. Working in her sleazy father's speakeasy, she can afford only the most basic clothing. In her simple blouse and skirt, which are not sexy, but also not dowdy, she unsuccessfully attempts to deflect the lust of her father's grabby customers.

Though Lily has plenty of fight in her, she feels powerless, and this is reflected in her slouching posture, barely tucked in shirt and blank expression. Her hair is loose and untamed, much like the undisciplined and aimless Lily. She is scolded by the Nietzsche-quoting local cobbler for her lack of ambition, but she can't see life beyond her bleak circumstances: 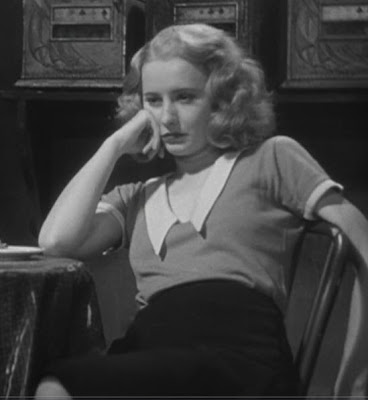 Then Lily's father dies in a still explosion, and the cobbler tells her to use the power of sex to make her way in the world. With no other worthy prospects ahead of her, she decides to take her mentor's advice. A gingham dress and a tight blazer show off enough figure to get her started. She flirts with the doorman at a swanky bank skyscraper and sleeps with the male receptionist in personnel. So far she doesn't need much more than her sex appeal, but that bright red lipstick can't hurt: 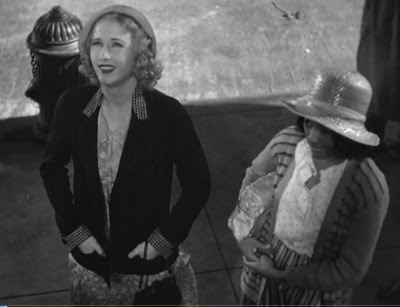 Now that she's making money, Lily upgrades her look. Check out those buttons; they almost make her dress look like a military uniform!  But she knows her costume isn't complete. She needs a helmet before she can truly go into battle. She admires a coworker's permanent: 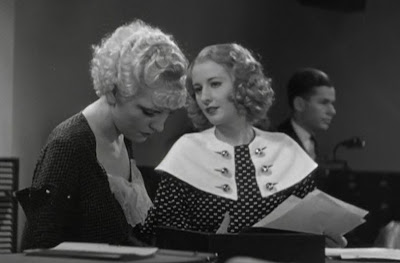 With her hair helmet in place, Lily is ready to move up in the world. Sorry young man (that's John Wayne before he was a cowboy), you're cute, but you don't have the cash to cut it with this gal: 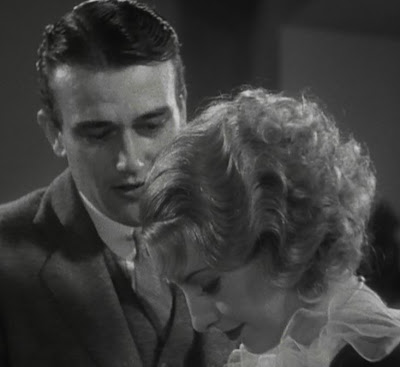 Lily also starts working on that plumage, she gets lots of showy dresses and all the while that hair gets more rigid and helmety: 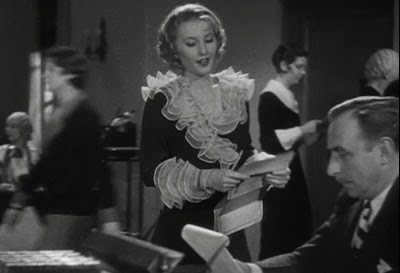 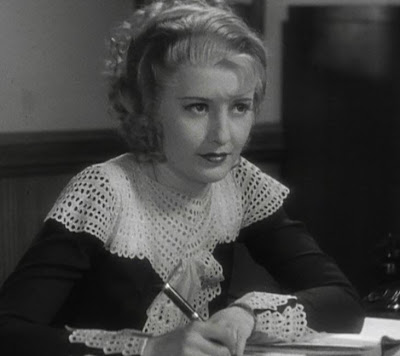 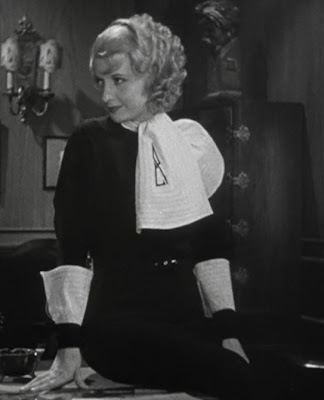 Once Lily works her way up to the executive class, she can quit her job and soften up her look. After all, a kept woman needs only to lounge: 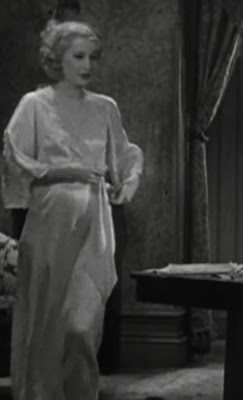 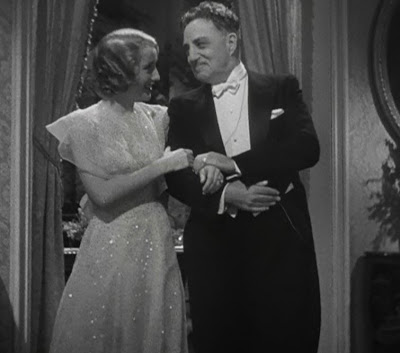 Even this showy trim is soft and cozy: 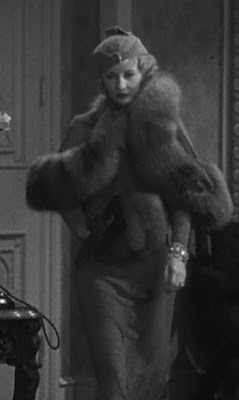 The woman is still keeping sharp though. She's in the habit of fighting for survival. Despite the lovely negligees, her hairstyle is even more severe: 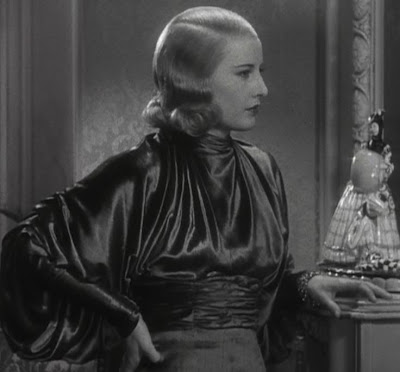 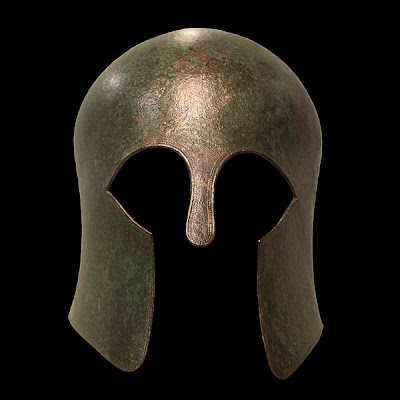 Lily could go on like this for years, but her conquests can't take it. A murder-suicide and a big old scandal cut off her cash flow. She tries to make her case to the bank's board dressed demurely in a sweetly tipped hat and lace scarf: 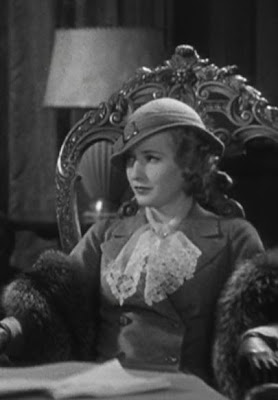 She still has that killer look in her eyes though. The newly instated playboy bank president isn't having it. He knows her kind. She is packed off to work in the bank's Paris office. There she sticks with the lace and tilted hat, but for the first time her clothing seems to reflect her true state of mind: 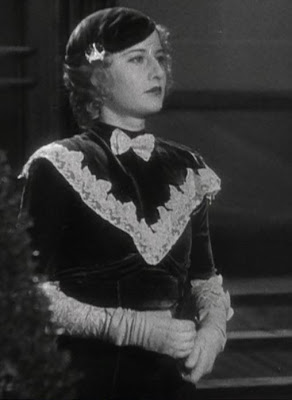 She softens her look: 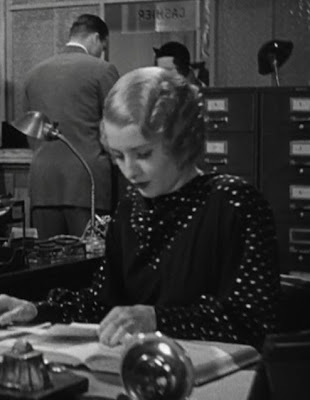 When that playboy bank president flirts with her on a business trip to Paris and takes her out to a nightclub, she hasn't got an agenda, and that shows in her gracefully-draped evening gown. Notice how her curls have relaxed a bit too? They no longer seem to be standing at attention. 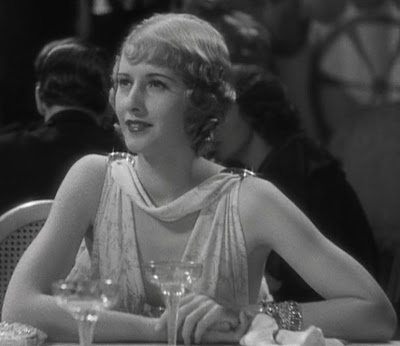 Look in her eyes though, she's falling for him, but she's still hard inside. It's amazing the complexity Stanwyck brings to this simple role: 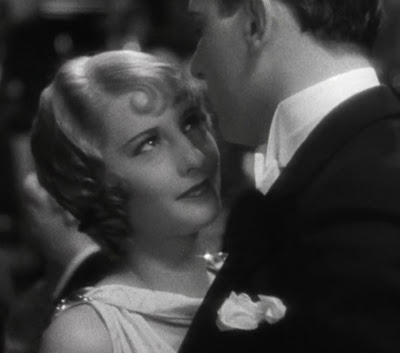 When Lily is finally legit, married to her bank president, she is truly in love, but the battle scars from her early life remain. That conflict is reflected in her final gown, which is soft and drapey, but also accented with a metallic collar. It's as if she can't shed that last bit of armor, and that's just what she needs to do to be happy: 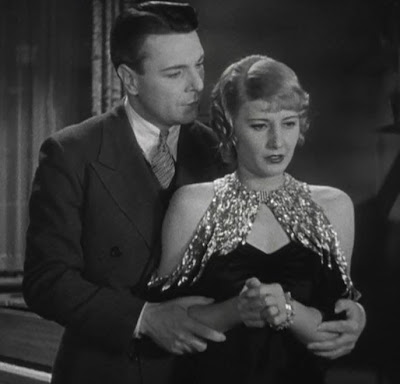 There's so much to love about Stanwyck in this movie, but I've always been most impressed by the way she subtly and maybe not even consciously uses her costumes and grooming to build her character. It is traits like these that made her characters more substantial, not just a glittering fashion plates, but a fully-formed women.
Posted by KC