Book Review--Footwork: The Story of Fred and Adele Astaire 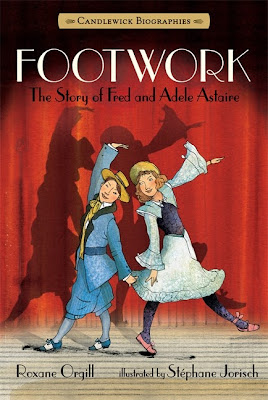 I've been fascinated by the partnership of Fred and Adele Astaire ever since I reviewed the excellent biography The Astaires: Fred & Adele last year. One thing that tortures me about them is that none of their legendary performances were filmed. Not one! For this reason, I was especially charmed by the illustrations in Footwork: The Story of Fred and Adele Astaire, a biography for young people, because they helped me to better imagine what this pair must have looked like in action.

Footwork follows the dancing Astaires from early tap lessons, through their decades-long stage career together, to Fred's leap from the footlights to screen stardom. It tells their story in an engaging fashion, capturing the facts, but with the artistry of a solid piece of fiction. We see the young dancing prodigies hoofing on the vaudeville stage and sharing the program with acts ranging from performing seals who stink like fish to dance geniuses like Bill "Bojangles" Robinson. You get a vivid sense of the triumphs and struggles they encountered on their way to fame and fortune.

The element that makes this brief bio special is the way it explores the relationship between Fred and Adele. Before he was a movie star, Fred danced in the shadow of his wild and charismatic sister. He focused on constant rehearsals and fine-tuning the details in their act, while she received the loudest applause and acclaim. When gifts of flowers and puppies came over the footlights, he knew they were for his sister.

Footwork explores this aspect of the Astaires' relationship beautifully, acknowledging the different reception each sibling received and showing how they worked through it by focusing on their act. There's also a beautiful moment where Adele sees her brother performing on his own and admires his skill, acknowledging that he can succeed on his own. It's a great example of how influences from the outside world do not need to lead to sibling rivalry.

While Footwork is most appropriate for children, I enjoyed experiencing the Astaire team's biography this way. I would recommend it to anyone who is fond of the Astaires or curious about their story.

Thank you to Raquel Stecher of Candlewick Press for providing a review copy of the book.