Projecting Movies At Home Is Amazing! 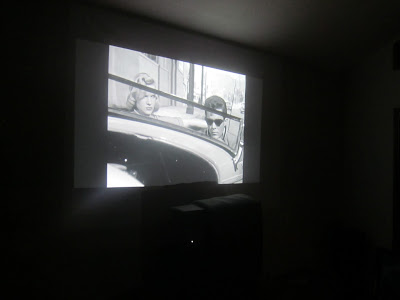 Ever since I read Clara's post at Via Margutta 51 about her home movie projector, I knew I had to have one. The possibility of turning my living room into a movie theater was so exciting!

It took me a while to buy a projector, because there were so many options and I was trying to find a happy medium: not too cheap, but not overpriced either. I knew I wanted one that could provide a good image in daylight, but the models that seemed to offer that were so expensive. Some were over $1,000 dollars. Less than your typical big screen TV, but more than I wanted to pay to experiment.

Though there are plenty of projectors meant for movies and gaming, I found that the ratings were better for machines meant to be used in a professional capacity. They seemed to offer better images and durability.

I finally settled on a refurbished version of this model, because it got such great reviews for daylight play. It was less than $300 and came with an HDMI cord, which I later found was incredibly useful for connecting the projector to different things. I'll get to what those things are in a bit.

I love this projector so much! It has totally changed the way we watch everything, from movies and TV to online content. The model I got was a winner, and going with a refurbished model was definitely the way to go.

At first I connected the machine to my laptop and projected the image right on the wall. That worked okay at first, though the bumpy surface made everyone look like they had a horrible skin problem.

Eventually, I got a large piece of curtain backing material from a sewing store. It has a nice, smooth white surface and since it is meant to block light, the image doesn't penetrate the material. I plan to wrap it around a frame eventually, but for now, we just have a big 'ol piece of white cloth on our wall.

Finding a good place to put the projector was tricky, we didn't seem to have a table that was the right height and I didn't like using books to prop it up. We eventually got this cart from Ikea, which has been great, because I can keep DVDs and remotes in the drawer and other stuff on the shelves below.

Stuff like my Roku box. And my VHS/DVD player, which has a television tuner. Long story short, our old school TV is now in storage. Thanks to that HDMI cable, I can watch Netflix, Warner Archives Instant Play, Amazon Instant and Pub d Hub on my wall via Roku. We don't have cable, so the tuner works for the rare times we watch broadcast television.

As I like to show my kids clips from YouTube, I thought I ought to find a way to stream that through Roku, and my projector, as well. I got the Twonky Beam app on my phone, and it is amazing. It gives you the ability to stream nearly every YouTube video (in addition to Vimeo and clips from a bunch of other sources) through your Roku. So now I can watch just about anything I please with my projector.

We found a long cord to connect our stereo speakers to the projector, which is great, though the volume doesn't have a remote. I've also downloaded the Roku remote on my phone, so I don't have to point it directly at the box. I can operate it from anywhere in the room, in the house even.

It's difficult for me to express how much it has meant to me to watch movies this way at home. It isn't quite like the theater experience, but it does make watching so much more meaningful. I'm more engaged in the film and I'm catching details that I often miss on my laptop or old TV. It has made me feel more in love with the movies than I ever have before, and that is beautiful.