New Documentary: The Magic of Casting 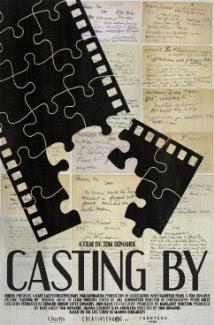 
More than 90% of directing a picture is the right casting.
-Martin Scorsese

James Dean, Al Pacino, Robert Redford, Jon Voight and Warren Beatty. If you like any of these actors, you can thank casting director Marion Dougherty for finding them. The HBO film Casting By, an entry in its weekly summer documentary series, pays tribute to this casting pioneer and to the exhilarating and demanding work of perfectly matching actor and role.

For over fifty years, Dougherty devoted herself to finding sharp talents. She had offices in an elegant, white Manhattan townhouse, where she only hired women for her staff. Successful casting directors like Amanda Mackay and Juliet Taylor credit her for not only building the industry, but starting and nurturing their own and many more careers in the field.

Marion Dougherty Associates had an unusual set-up, with aspiring screenwriters and actors living in the upstairs bedrooms and an elderly character actor bedding down in the basement. The place became a meeting place for young actors who enjoyed the friendly, domestic environment. Dougherty would literally find herself waist deep in headshots and young, hungry actors would resort to all kinds of tricks to get a moment with her.

This determined casting pioneer got her start in television, casting for Kraft Television Theatre, a show responsible for launching the careers of actors like Ann Francis and Jack Lemmon. After that success, she moved on to casting Naked City and Route 66, where she continued to draw fresh talents from the stage to the sidewalk. One of the most amusing parts of the documentary is watching clips of these young actors developing their chops on live television and heading for greatness. Christopher Walken sure was a cutie back in the day.

Dougherty believed in gut reaction when it came to looking for new talent. She followed her instincts, and often she saw things in people that they didn't see in themselves. I always thought casting directors simply filled the roles in a film and stepped away, but Dougherty fought hard for some of her choices, sometimes working for months to convince a director to cast a particular talent. She campaigned intensely to win Jon Voight the lead role in Midnight Cowboy (1969), a part that would make his career. The film three Academy Award nods for acting and won Best Picture, but Dougherty wasn't even included in the credits.

Despite lack of appreciation from the suits, and sometimes even directors in the industry, great casting directors are adored by actors, because they are among the few in the industry who truly believe in and fight for actors. Dougherty gave many second chances. If she saw that special spark in an actor, she wouldn't give up on them.

Glenn Close nearly fluffed her chance for fame by trying, and failing, to sound like Katharine Hepburn in an audition. Jon Voight gave an embarrassingly forced performance in his first television role. Jeff Bridges had a similarly humiliating experience in a dramatic scene that drew unwanted laughter from the audience. Thanks to support from Marion Dougherty, all three got their big breaks and brilliant careers.These are among many actors in Casting By who share their gratitude to the determined cast director for trusting her instincts and sticking with them.

Though Dougherty is the focus of Casting By, one interviewee calls her "the goddess of casting," it also pays tribute to this lesser known, and apparently deeply unappreciated aspect of the entertainment industry. It dips into the overall world of casting, with fascinating stories about the lengths professionals, like the also legendary casting director Lynn Stalmaster, would go to to fill an important role.

Stalmaster was the first casting director to earn single title card credit on a film, for his work in Thomas Crown Affair (1968). Director Norman Jewison felt the attention was well-deserved, other directors interviewed underplay the importance of the profession. Taylor Hackford actually seemed threatened, almost angry, that a casting director would get credit for finding an actor. He felt as director that he should get full credit, despite the fact that he might only have made the final decision and did not put in the work to find the performer.

There were moments like the Hackford interview which had me hopping mad. Who knew that the profession of casting could inspire such passion? And if Dougherty didn't get proper respect at the top of her industry, it must be brutal for those in the lower rungs of the profession. I am now convinced that there should be an Academy Award for casting. Finding the right actor for the role is where the magic begins.

Interviews with over fifty actors, directors, film historians and other experts give Casting By a rich diversity of perspectives. The actors in particular told fantastic stories, and I had a big smile on my face many times. It made me appreciate acting more, the fun of it, and the little touches that go into it. As brutal as it can be, I understand why all of these people adore what they do.

I loved this lively, entertaining and sometimes devastating film. It introduced me to a pocket of creativity in an industry that so often seems more about the business than the show. I'll never take casting directors for granted again.

Thank you to HBO for providing a copy of the film for review.
Posted by KC