The Latest "New Pulp" Adventure from Stephen Jared: The Elephants of Shanghai 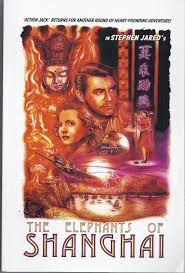 Actor/writer Stephen Jared has long been a friend of Classic Movies. His fiction debut, the rousing adventure story Jack and the Jungle Lion, was one of the first books I reviewed for the blog. Stephen has also distinguished himself here by writing the most popular guest post in the blog's history, a touching essay about Mary Pickford and Douglas Fairbanks' relationship written for my Pickford blogathon in 2012. Check it out.

Though I enjoyed Stephen's second novel, the detective story Ten-a-Week Steale, I have to admit I was a bit disappointed that he didn't follow up with a sequel to Jungle Lion. I loved the characters in that book: the dashing movie star Jack Hunter, strong-willed animal trainer Maxine (known as Max), her wards nephew Tyler and niece Lindy, orphaned following the death of her sister, and the alcoholic, but cuddly pilot Clancy. They were familiar types, and their story was hardly anything new either, but Jared made them so lively I felt like I was watching a classic action movie. It was a fun, lively read.

It turns out freshening up familiar character types and story lines is a genre, new pulp, and Jared has got it down. He's got a knack for snappy dialogue and exciting action scenes.

I can't exactly review the new book, because there is a quote from yours truly on the book jacket. But I did truly enjoy the sequel. While Jack and the Jungle Lion was set in 1937 in the South American jungle, The Elephants of Shanghai shoots forward to 1942. Jack, feeling useless as a movie star, sets out on his own to help the war effort. Of course he gets himself into trouble and some familiar faces return to bail him out.

The story is a bit darker this time, though there are plenty of light moments. There's also more character development, and we get to know Jack, Max and Clancy better. You don't see much of the kids this time. Hopefully they'll play a larger role in the next book?

The Elephants of Shanghai is another great Jared adventure. I'm looking forward to the next one. You can buy the book here--it's quite the steal on Kindle. As a bonus, Jack and the Jungle Lion comes bundled with the sequel. You don't need to read it to follow the action in Elephants, but it is so much fun, why not check it out anyway? I enjoyed reading it again.


Thank you to Stephen Jared for sending me a copy of the book.