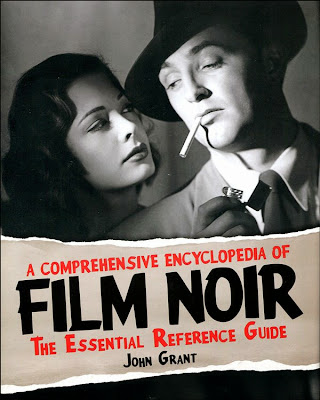 Though your typical movie fan is going to have a good feel for what makes a flick film noir, the definition can be slippery if you try to pin it down. It has a definite feel, but is at the same time imprecise in its boundaries. In his encyclopedia of the genre, author Grant solves this problem by simply stating, "you know what it is when you see it."

There were many titles in this book that had me thinking what I saw as noir was dramatically different from Grant, but I didn't find that too troubling. There's so much to enjoy here that it doesn't matter if a few choices bring up an eyebrow. He lost me at Throw Momma From the Train (1987), but his inclusion of Ace in the Hole (1951) led me to think about that dark drama in a new way.

One of the most exciting things about Encyclopedia of Film Noir is that it covers so much ground. It has movies from the silent age to the current day: proto-noir, neo-noir and the classics in between. There's also an impressive international diversity with picks from countries such as the Philippines, Italy and Egypt, though the USA, France and United Kingdom are most heavily represented.

Lots of the thrillers, crime flicks and even comedies here don't fit into traditional ideas of noir, but they do seem at home. Grant is comfortable throwing in movies with just a hint of the style, or which were an early influence as the form developed. This opens up the book nicely, keeping it from being too tight in scope.

Entries are generally brief, though a few big titles get a more in-depth review. Beyond plot description, they can be unpredictable, with tidbits of information about production, audience reception and how they fit into the world of noir. There's also the odd extended section for significant noir or noir-tinged characters and series like the Thin Man movies and Tom Ripley.

It's a blast to read this book. Though it's easy to skim for particular periods and countries, I found it most rewarding to read in big chunks. Combing through in this way led to some great discoveries. I've now got a viewing list that will keep me busy for a long time. A helpful appendix in the back also groups films by actor, author and director.

Reading the introduction is vital to understanding the language and concepts of noir used throughout the encyclopedia. Grant does an excellent job concisely describing important elements like fate, the dangerous femme, double crosses and the quicksand effect. He also explains god gaming, when a "protagonist believes a false version of reality," which is in essence the key to the unease that characterizes noir.

I can back up that subtitle, this is an essential reference for any fan of noir or crime movies.

Many thanks to Hal Leonard Performing Arts Publishing Group for providing a copy of the book for review.