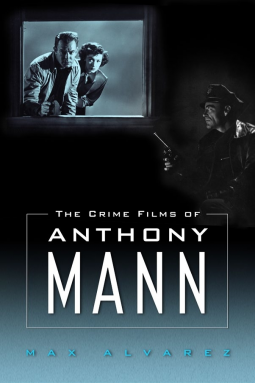 The Crime Films of Anthony Mann
By Max Alvarez
University of Mississippi Press, 2014

I hate dialogue. The camera is the most exciting part of the medium for me. It can get anything over in one flash: you can experience a great shock or great beauty or any great moment simply by seeing it pictorialized. -Anthony Mann

Though director Anthony Mann is perhaps best known for bringing out James Stewart's dark side in a series of so-called psychological westerns, I've always liked him best for his early noir and crime movies.

I appreciate the scope and toughness of Winchester '73 (1950), The Naked Spur (1953) and The Man from Laramie (1955), but I'm much more likely to return to the thrilling, tense worlds of Raw Deal (1948), Border Incident (1949) and Side Street (1949). This is where I think Mann was most inventive, working within the limitations of often small budgets to create an economical, distinctly action-driven style that gave his early flicks a shot of excitement.

In a short, but eventful life, Mann worked successfully across several mediums. He got his start as a teenager, acting on Broadway, soon moving on to directing. That led to work in some of the very first live television productions, which gave the young director a crash course in filming on a tight schedule. He went to Hollywood in 1939, where he struggled to find his niche for several years, but the odd dramas and unsatisfying musicals in his early filmography helped him to build his skill and reputation. Before long, he started to grab audiences with gritty movies about the dark side of society, and his budgets began to gradually increase.

The Crime Films of Anthony Mann focuses on those early years in Hollywood, where he primarily made his mark at Republic and RKO studios, but the book covers the full scope of his life. There's a surprisingly detailed biography, which offers satisfying context for his work. There's also just enough information about his lesser/non-crime films to give proper context. I enjoyed this approach; it nicely balanced the various phases of life so that the text was simultaneously thorough and carefully focused.

Mann had an unusual childhood, spending many years living in a commune-like community in San Diego called Lomaland. There he had his first taste of the arts and the chance to perform Greek and Shakespearean classics. His early life had its dark times though. Punishments at the center could be abusive and Mann was basically abandoned there by his parents for most of his childhood. Before he left his sheltered Lomaland existence at the age of fourteen, rescued by his mother's cousin, he had never even seen money.

He was then moved to New York, where after a few years of schooling Mann dropped out and began his real education on the stage. While he struggled for years to find his place as a director, the young man's momentum was always strong and his career progressed steadily from those early days. It's remarkable to think that this skilled craftsmen got his start in the movies as an east coast talent scout for David Selznick in 1936. He truly worked his way up from the ground level.

Alvarez describes Mann's work as achieving "the maximum in cinematic impact from minimum of means" and it is this element that I found most exciting to read about. The director knew exactly what he needed and he went about getting his shots with a remarkable combination of efficiency and artistry. He would have a set lit and then get every shot he needed from that angle, so that there would be no need to spend the time preparing it again, and yet his results were not as workmanlike as you'd expect.

There's also lots of detail about Mann's fruitful partnership with cinematographer John Alton, who understood the director's rhythm and knew how to make striking images by working with the limitations of a dimly-lit scene. Various screenshots throughout the book help to illustrate the accomplishments of these skilled professionals.

Alvarez does solid detective work, digging up answers about the more mysterious elements of Mann's life. His analysis of the director's reported involvement in He Walked By Night (1948), the classic noir starring Richard Basehart, left me convinced that while uncredited, he had definitely made a significant contribution to the direction of that film. This is strong film scholarship, revealing fascinating details and approached with great responsibility.