Book Review--Fireball: Carole Lombard and the Mystery of Flight 3 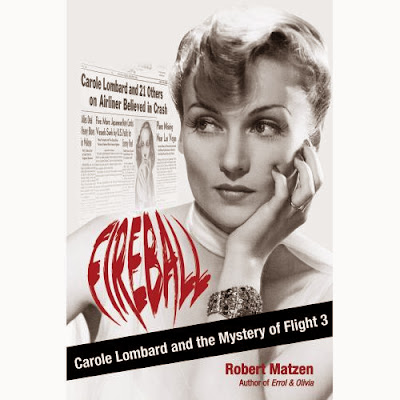 In order to properly tell the story of the 1942 death of 22 passengers in TWA flight 3, a crash that has endured in memory because one of them was the glamorous film star Carole Lombard, author Robert Matzen strove for authenticity. He thought he could do no better than climbing to the site of the crash on towering Mt. Potosi in Nevada, a chilly peak with a view of Las Vegas below. The four hour climb led him to a site where there were still shards of metal covering the ground, enough that he could hear them crunching with each step. There were other fragments as well, even human bones.

This is the chilling introduction to a detailed, touching account of the crash that killed soldiers, an air hostess, two pilots, the actress, her mother and her husband Clark Gable's assistant and best friend Otto Winkler. The actress was rushing home to see her husband after selling two million dollars in bonds in a whirlwind fundraising campaign. She feared Gable was getting too cozy with current costar Lana Turner and was desperate to distract his roving eye with her presence. Lombard gets most of the attention, but every passenger on board gets a moment, and that's what makes it such an effective, devastating story. 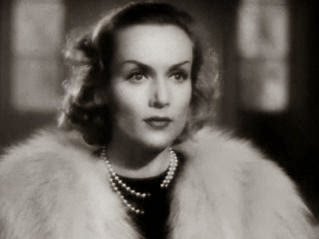 Having never read a book about Carole Lombard (how can that be?) I can't say whether Fireball adds anything of significance to her story. It appears that much of the biographical information comes from Larry Swindell's book about the star, with a few more tidbits from Carole Lombard, The Hoosier Tornado by Wes D. Gehring. I craved more detail in these sections, but the brief biographical gloss did what it was meant to do. You certainly know what the world has lost once you see what this generous, energetic woman had to offer.

In the first part of the book, chapters alternate between Lombard's life and the story of the crash. While I've seen this work before where a dramatic event dominates the life of a subject, it was a bit distracting here. I found it jarring to be tossed back and forth along the timeline.

There's a point though where the tragedy of the crash begins to close in though and the story forges forward without distraction. The intensity of the narrative increases as it becomes clear that lives were not only lost, but destroyed in the aftermath of the crash. Clark Gable and Otto Winkler's wife Jill carried the weight of their losses for the rest of their lives. It was an event so horrible that they could not even attempt to recover.

There are others who also could not escape the fallout from flight 3. Widows and widowers who were at the beginning of a happy life together, or who were together for so long that they couldn't imagine continuing without each other. One soldier who hoped to help a fellow army man by giving up his seat on the plane went on to enjoy success and happiness, but never set aside the pain of knowing that he had it all because he dodged death with what he thought was an act of generosity. The dozens of rescuers who worked to document the crash site and retrieve bodies would have nightmares the rest of their lives about the horrors they witnessed.

That brutality is described in detail. Some sections of Fireball are so graphic that I wondered if they might be too traumatic for some of the more devoted fans of Lombard. I assume that any reader would know they were in for something heavy in reading this book, and it is truly a rough read in that regard. The only upside: the plane hit the mountain so hard, so quickly that it is unlikely most of the passengers knew what was happening.

I don't know if I've been brought to tears as many times reading a book as I have this one. Learning the stories of all who were involved, from the crash victims to family and friends was moving, but also unbearably sad. It was a great show of respect to tell all 22 stories and to acknowledge the enduring effects of this unfortunate event. I'm glad I know what happened, and that I now understand the true impact of the crash, but that knowledge haunts me and I'm sure it always will.

Thank you to GoodKnight Books for providing a copy of the book for review. 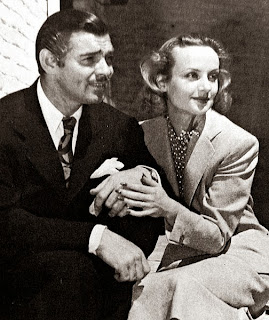