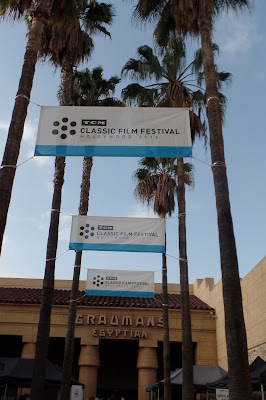 By day three of TCMFF, I was already starting to drag. The excitement of the Manchurian Candidate experience drained me a lot more than I'd expected. Fortunately, an early morning walk down a remarkably calm Hollywood Boulevard, and a little quiet time sitting in the sun in the forecourt of the Egyptian Theatre helped to revive me. It also helped that my first event of the day was one of my festival favorites.

This fascinating presentation is one of those festival events that could stand alone as a remarkable night at the movies, much like the hand-cranked films presented at TCMFF 2015. Ron Hutchinson of The Vitaphone Project gave a detailed, but sprightly lecture about the history of Vitaphone machines, the first  widespread method of combining film and sound, followed by a program of seven Vitaphone shorts. I was blown away that one of the films, Little Miss Everybody starring impressionist Zelda Santly, had not been screened in public for 80 years. How magical it was to be able to be among the first to see her spot-on impressions of Mae West (pre-film West that is), Fanny Brice and Maurice Chevalier after all these years!

I'll admit that I went into the presentation thinking the films would be charming artifacts, pleasant, but perhaps with comedy that didn't completely translate to the present day. I was humbled by the timeless humor of what I saw. George Burns and Gracie Allen dancing a soft shoe and cracking jokes, the seven-years-going-on- 40 panache of baby chanteuse Baby Rose Marie and the deadpan perfection of the comedy team Shaw and Lee, among many more--these acts demonstrated how fresh and timeless vaudeville could be.

When you think about it, it makes sense. If you are playing to a demanding live audience accustomed to a wide array of acts, you've got to tap into something elemental to grab their attention. It's more than current fashion or events, but rather finding what makes the human animal laugh until the tears come.

It was an invigorating way to begin the day.

William Wyler is one of my favorite directors, and I think the best of the studio era, so this pre-code was a must-see for me. Eddie Mueller of the Film Noir Foundation spoke with the director's son David before the film, which made sense to me once I soaked up the dark fatalism of this film. Wyler Jr. had only just seen the film himself, as it had not been available until recently.

David talked about how John Huston had an early job writing dialogue for the film and how star Walter Huston was a bit of a troublemaker on the production at first. If that is so about Papa Huston, you can see how it benefited the film. He is so overbearing and scary as the patriarch of a broken family who orders a mail order bride. Sometimes I felt like I was watching a horror film.

The tension, forbidden romance and horror reminded me a lot of the pre-code Kongo (1932), which also starred Huston. 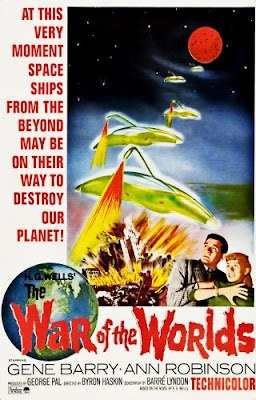 Academy Conversations: The War of the Worlds (1953)

Attending this presentation was one of my best schedule changes of the festival. I've had a growing interest in classic sci-fi, especially films made in Technicolor, so this seemed a perfect way to expand my horizons.

I'd never attended one of the programs put on by visual effects artist Craig Barron and sound designer Ben Burtt, but I'd heard they were popular, so I thought it might be interesting.

I was so happy I'd attended, because I not only learned how many of the effects were achieved in the film, but I discovered, in essence, a new way to study film. By reconstructing the effects for War of the Worlds, Barron and Burtt basically got into the minds of the filmmakers of the era. They showed how creative and inventive these technicians could be and how much every detail of sound and image improved the film.

Later in the festival, I had the pleasure of chatting with Barron and Burtt at Club TCM. It was great to be able to thank them for their fascinating presentation, and even more fun to get their rundown of The Scent of Mystery, which I had been a bit disappointed to miss the last morning of the festival (they agreed that I was right to go with Shanghai Express though). I love this pic of them: 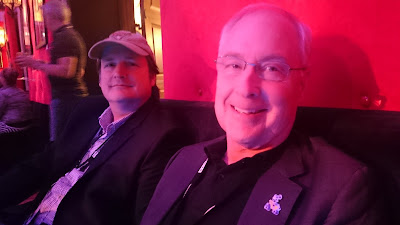 But they were right to insist I get one which goes with the "Scent" theme: 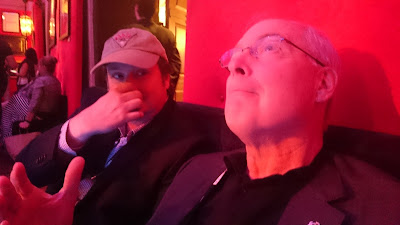 Back to the presentation:
It was also fun to hear from War of the Worlds lead actress Ann Robinson, who was in the audience. There was only time for her to share a couple of stories about the production, which was a shame, but it was still great to have her there. She also took a moment to chat with fans in the lobby after the film.

After all that background information, it was impossible not to enjoy the film, but I think I would have liked it anyway. The effects really are impressive, the action is paced just right, and how amazing to see a leading lady with an advanced degree in a mid-century film. I especially appreciated how the aliens were kept under wraps, with only a few brief full-body glimpses or wrinkly fingers in view. It was a great way to increase suspense and I'm sure it also helped to make the film a bit more timeless.

I'd love to see more classic sci-fi on the big screen. My curiosity was definitely whetted by this experience. 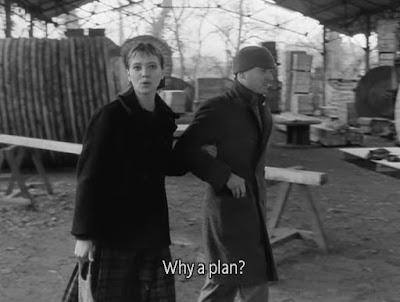 The whole inspiring, overwhelming experience of being two feet away from Anna Karina shot me through with so much adrenaline that I was sure I wouldn't be able to sit through the film to follow. This is one of my favorite Godard flicks though, and it would be the first Karina film I had seen on the big screen.

I ended up next to the VIP section after the interview, and quickly found myself practically with a row to myself. Yes, this film is not for everyone. For all its classic moments: the saucy Madison dance scene, the literal minute of silence, the madcap run through the Louvre, it can still try the patience.

The reason I love it? It is a rebellion against everything: narrative structure, stardom, society. If you listen to the narration, there's so much emotional logic to it, but then the images on the screen proceed to flip the bird at anything you've got. This is a film full of children at play, and they don't want your approval. I find that incredibly exciting. 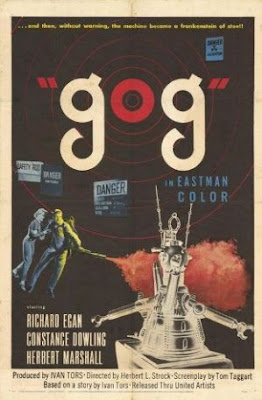 My Karina adrenaline, and some roaring laughter, got me through this midnight screening with only the briefest of naps. Still, I'm not sure I caught the full plot of this madcap sci-fi. All I can remember is a frozen monkey, a hysterical woman getting slapped, Herbert Marshall with a flame-thrower, some robots and a lady who seemed almost delighted to have taken on an extra bit of radiation.

I've also got this strong memory of wishing the monkey was behind everything, like it was some kind of a monkey revenge flick. I suppose I need to watch this again just to figure out what that means.

There's something very touching about the fact that this insane film was so lovingly restored. Yes, the audience was laughing at it, but my goodness it looked gorgeous. 3D films usually give me a headache, but I enjoyed every moment of this one. It was a lot of fun.

Like Brief Encounter, this Josef von Sternberg/Marlene Dietrich collaboration was a must-see for me because I'd seen it so many times in the past and I wanted to elevate the experience by seeing a restored print in a theater. I was so disappointed to miss the first screening due to the handprint ceremony at the Chinese Theater, and delighted to have another chance to see it.

I was also happy that von Sternberg's son Nicholas came back to talk with Jeremy Arnold again before the film. He shared that the "von" in his family name was pure pretension, added because it "sounded more aristocratic." He also shared that Emil Jannings hated the director, and that he would sit on Dietrich's lap as a child. I was also fascinated to learn just how strong the collaboration between Dietrich and von Sternberg was: he would give directions and then she would add embellishments and make improvements.

The film's restoration just sparkled. I throw around the word magic a lot when I talk about TCMFF experiences, but here the description couldn't be more apt. While the plot is of little consequence and you are really just admiring Dietrich and the eternally hip Anna Mae Wong lounging around, there is something more profound than a series of poses going on here. Both actresses understood the power of creating their own images and they shared a lot about the experience of being a woman in doing so. 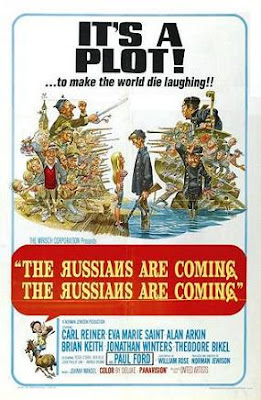 Seeing Stacy Keach before John Huston's Fat City had long been one of my must-sees of the festival, but when the time came to line up, I couldn't bear to see such a heavy drama. It was a beautiful day and I was a bit tired and emotional. I decided I needed to see a comedy and the opportunity to finally see Eva Marie Saint in person finalized my decision.

I think I might have actually been a bit bored watching this long-for-a-comedy film by myself, but in the theater, with an enthusiastic audience, it was one of the funniest things I'd ever seen. The physical humor, satire and goofy lines were meant to be seen blown up larger than life. Some movies just don't translate to the small screen. That said, I think I'd enjoy this film in any format now that I've got the memory of this experience to enhance it.

I changed my mind many times about which film would be best to finish TCMFF 2016. At first I thought it would be best to see Cinema Paradiso in the magnificent Chinese Theatre; then I was intrigued by the prospect of seeing Fay Dunaway before the still-relevant news drama Network. In the end though, I wanted to close the festival with a shot of romantic, elegant Hollywood glamour. I thought about the glorious Dancing in the Dark, where Cyd Charisse and Fred Astaire demonstrate their emerging love in a swooningly romantic number, and I decided I couldn't do better than that.

It was such a relief to get that final queue number of the festival! No more running to get in line. No more schedule strategizing and indecision. While the thought of leaving it all was bittersweet, I was ready to call it a day. Amusingly enough, I was so tired that I almost slept through the Dancing in the Dark number, but something in my snoozing brain screamed at me to wake up, and I only missed a few moments. It was astonishing to see this film on the big screen. I chose wisely.


Check out my full TCMFF 2016 coverage here.
Posted by KC