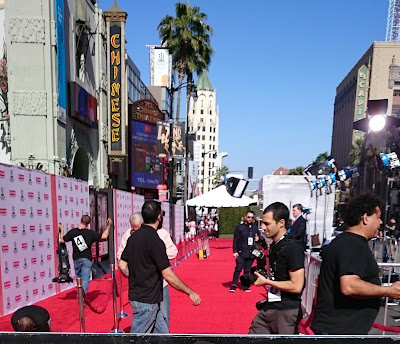 It's taken me a few days to unpack all the experiences of TCM Classic Film Festival 2016, not to mention catch up on sleep. This was my third year covering the festival. It gets better every year.

Friendships with fellow film fans deepen, it gets easier to navigate long lines and find places to get a quick bite, and that starstruck feeling of seeing Hollywood greats in the flesh endures from year to year.

All 26,000 of us festivalgoers spent four days collectively high on movies, the reflected glory of glamorous stars and the intensely enjoyable feeling of being in the company of people who love the classics as much as you do.

For me, the red carpet before the opening night gala film presentation is always the true start of the festival. It's much like the opening credits of an all-star flick like Dinner at Eight (1933) or Grand Hotel (1932); the parade of famous faces offering a preview of thrills to come.

I was amused to realize that I must have lined up for the red carpet bleachers at about the same time as last year, because I got the same queue card number. Here's 2016: 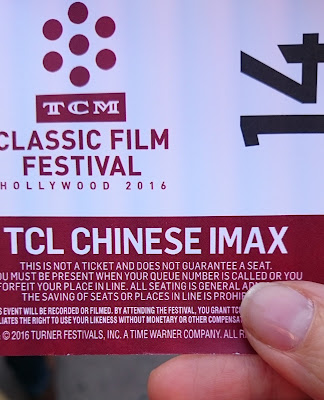 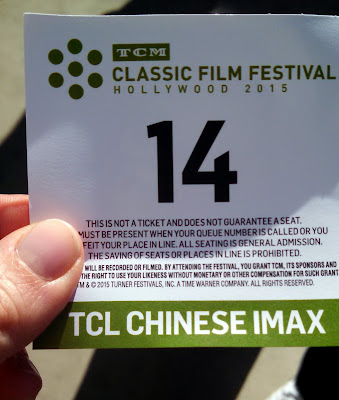 As difficult as it can be to wait for the honored guests to make their appearance, there's always plenty to take in once seated in the bleachers. Like this guy who must have gotten every speck of dust off the red carpet. He was at it for at least an hour. It was mesmerizing: 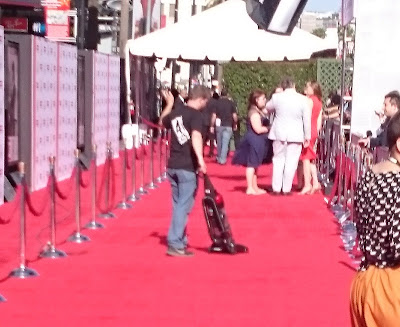 It was also nice to have a good view of several fellow bloggers setting up for interviews:


I also loved the way event MC Sean Cameron, TCM VP of Studio Production made everyone feel like a star, from the Spotlight passholders to staffers working the event. The crowd happily complied whenever he encouraged a cheer.


Everyone definitely came dressed to impress too. I love this queen working the tiara: 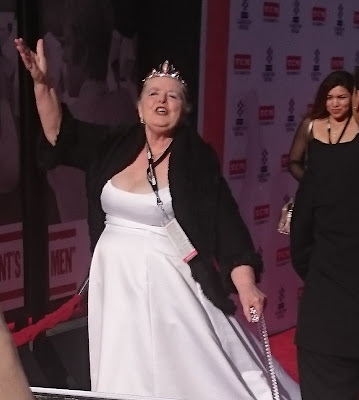 There always seems to be at least one attendee who goes for the kilt: 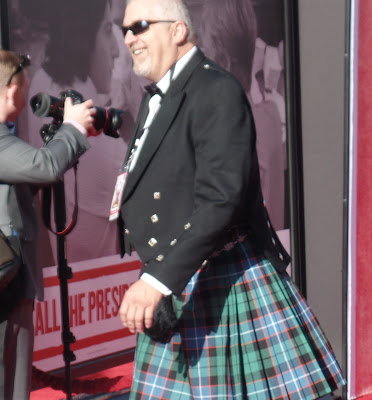 I wanted to get a better shot of this guy's mafioso get-up, but I didn't like the way he was looking at me. Guess he was staying in character: 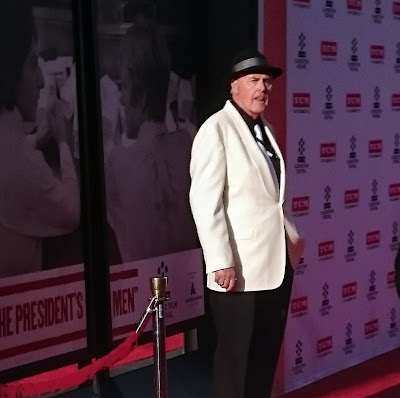 I sat behind this lady on the bleachers. It took me a while to get the joke, but I loved her reference to the opening film, All the President's Men (1976): 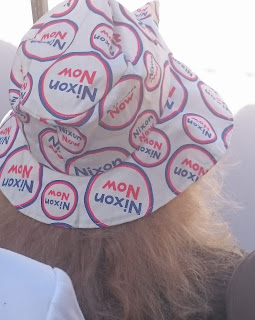 As I was determined to make it to my first film of the festival, A Tree Grows in Brooklyn (1945), I didn't stick around for the full red carpet procession, but I did catch some amazing sights.

Of course it isn't a true TCMFF gala without Ben Mankiewicz. Here he is with Sean Cameron: 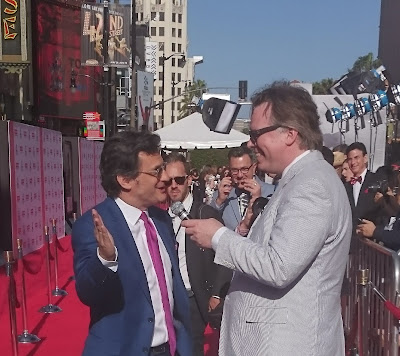 Leave Her to Heaven (1945) was the last film I watched before flying out for the festival, so it was great to see that film's juvenile star Darryl Hickman, who was attending TCMFF to introduce a screening of Tea and Sympathy (1956): 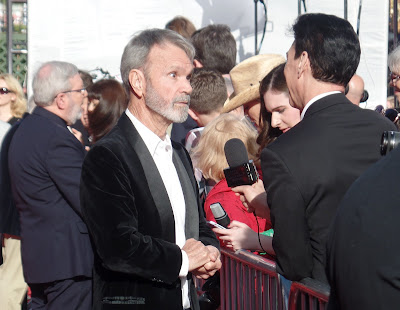 Can you believe this guy is 84? 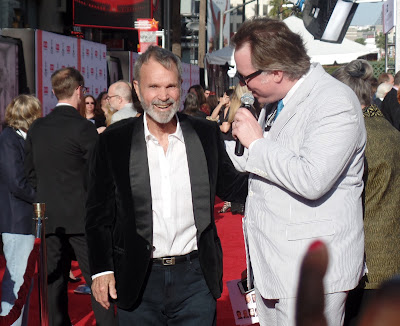 And check out his hip sneaks: 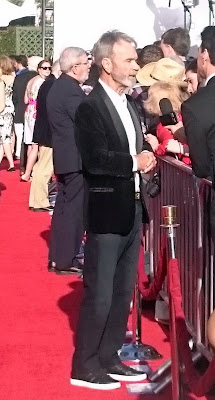 I think this first glimpse of The War of the Worlds (1956) star Ann Robinson planted the seed for my eventual interest in catching the film at the festival. And I'm so glad I did! 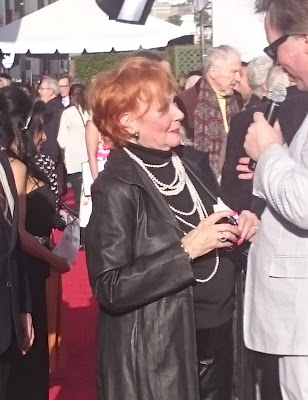 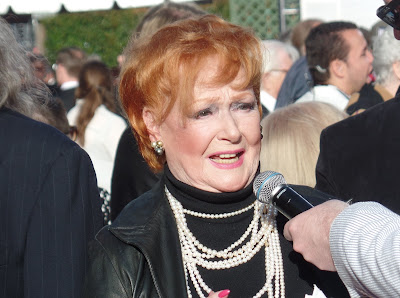 It's always fun to see that even TCM staffers can get starstruck. Lee Meriwether seemed a bit surprised to see Cameron crushing so hard on her: 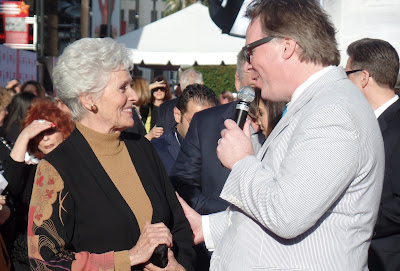 Of course she was gracious about it: 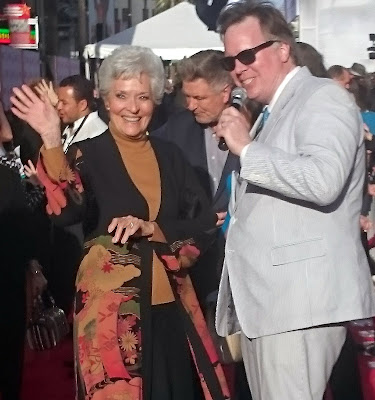 I was charmed by Salvatore Casico, who played the young Toto in the 2016 festival closer Cinema Paradiso (1988). I almost changed my plans to see The Band Wagon (1953) just so I could hear him say the title of the film again: 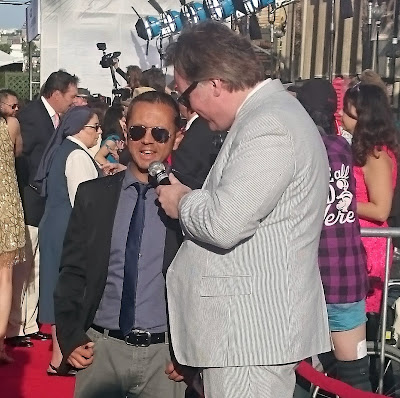 Oh Italians. (there's the delightful Sister Rose Pacatte in the background too): 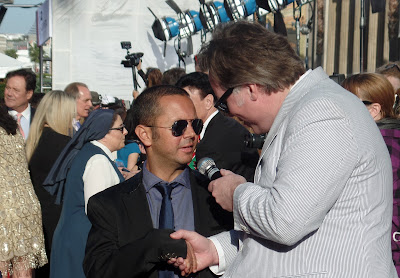 It was funny to see everyone essentially ignore Alec Baldwin (he eventually had his moment) and go bonkers for 101-year-old wonder Norman Lloyd: 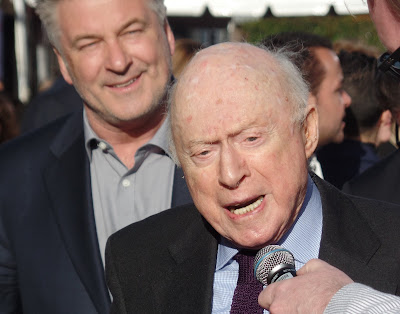 Baldwin seemed hip to it, and totally in agreement with the crowd.

Look at the amazing smile on legendary songwriter Richard Sherman's face. Wouldn't it be great to spend an hour in that lovely musical brain of his? 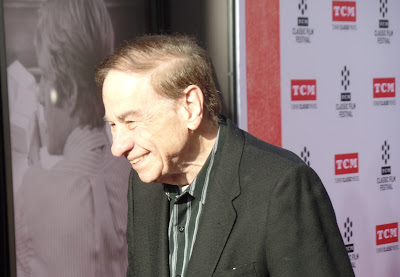 Special guest Carl Bernstein was an interesting contrast to the rest of the celebrities on the red carpet. He has definitely influenced the world in a dramatically different way: 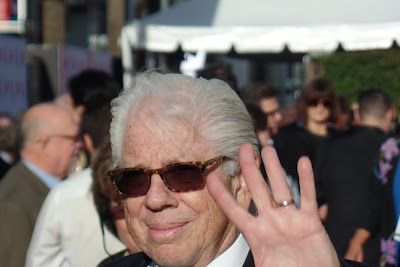 It was nice to get a look at A Tree Grows In Brooklyn (1945) star Ted Donaldson before his intro. of the film later that evening: 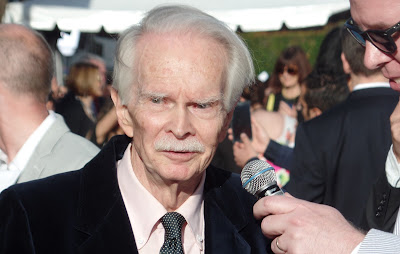 And who knew that The Office star Kate Flannery was a fan of classic movies? She was much more petite than I'd expected her to be: 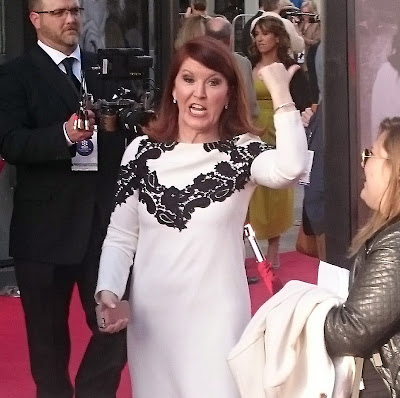 I never get tired of seeing the tireless superstars of the TCMFF family too. 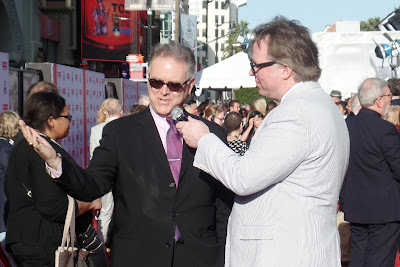 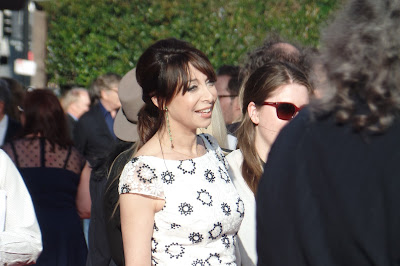 And the always-congenial Leonard Maltin: 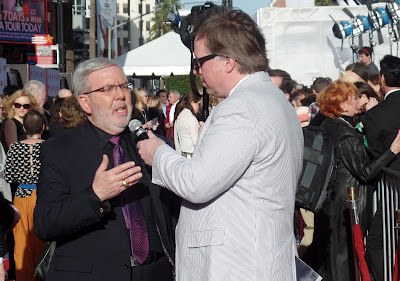 This next shot isn't exactly a shot of Maltin. It is actually the moment when I totally freaked out, because KARINA APPROACHES! 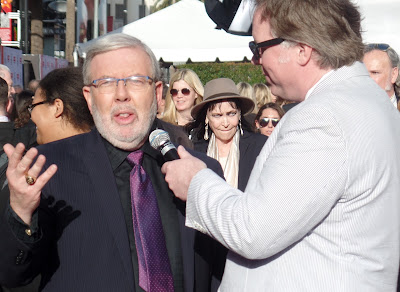 I was only a bit disappointed that Anna Karina slipped by Cameron without comment: 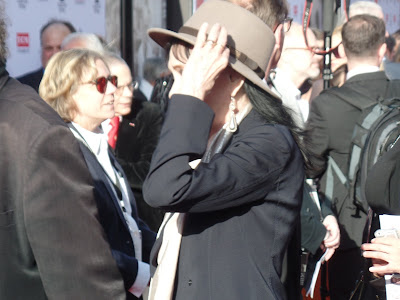 I mean, I love a woman of mystery, but I also probably would have lost it if she'd stopped to talk after appearing so suddenly and catching me completely off guard. After seeing so many stars over the years, I didn't think I was capable of being so utterly starstruck anymore, but I was shaking for a good half hour after she passed by.

My completely emotional response was to shout out "Je t'aime Karina!" After which a woman in the stands said "Anna Karina?" She walked by that quickly.

Though I was disappointed to not catch the rest of the stars on the carpet, I had to miss the glorious presence of Gina Lollobrigida, Lou Gossett Jr., Roger Corman and more to make it on time to my first film.

After that Karina moment, I don't think I could have sat still much longer anyway.

Check out my full coverage of TCMFF 2016 here.