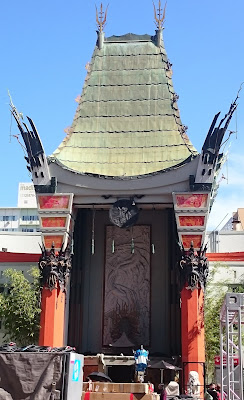 On the second morning of the TCM Classic Film Festival, I had the pleasure of covering a hand and footprint ceremony honoring Francis Ford Coppola in the forecourt of the Chinese Theatre.

This is the third year that I've attended the ceremony and, as in previous years, it was a fascinating, once-in-a-lifetime event.

I was pleased to get a much better spot to watch the festivities this year. In 2014 and 2015, the bloggers were corralled behind a gate with a crowd of onlookers. This year we got a nice corner near the center of the action.

It's nice to have time to stand by the theatre and soak up its beauty without being harassed by an aggressive Batman or a Spider-man with the shape of Homer Simpson.

In addition to enjoying some people watching and seeing the staff preparing for the ceremony, I always love finding new things to admire on the facade of the building. This year, I noticed this guy for the first time: 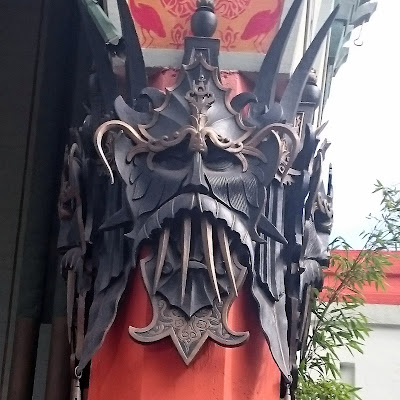 It's also great to see the block of wet cement, all ready to immortalize someone new: 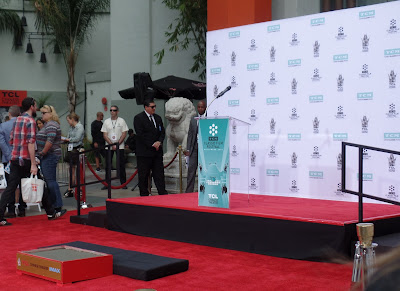 The wait time before the ceremony is also the perfect time to get caught up with friends I only get to see at the festival, and sometimes very briefly once the whirlwind of film screenings begins. Raquel, Jessica and I have enjoyed covering the ceremony together for the past three years: 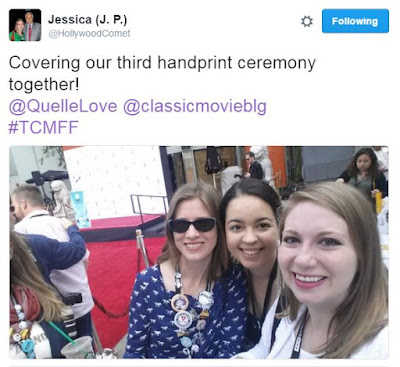 And this year there were even more fun people to talk with! 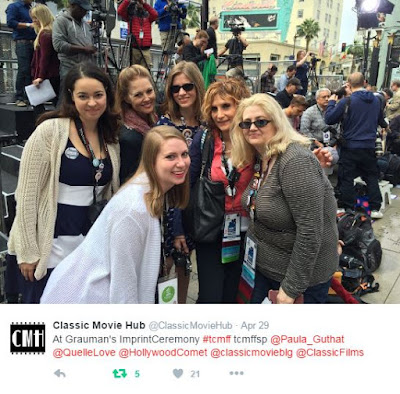 One of my favorite things to do before the ceremony begins is to look for familiar faces in the VIP seating. I'm pretty sure I saw John Landis, though I neglected to get a photo.

I picked out Peter Bogdanovich right away. There's no mistaking that serious expression and neckerchief. I was excited to see him, as I admire both his films and his amazing film scholarship. And is it just me, or does the guy next to him look a bit like Edward Arnold? 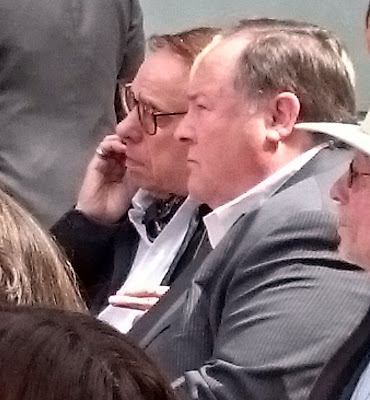 When Ben Mankiewicz stepped onto the stage, my first thought was that this hardworking man had a long weekend ahead of him. He is always graceful under pressure though. A real class act: 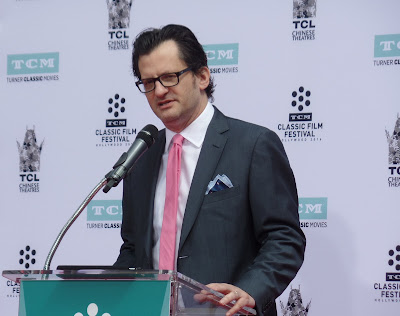 Roman Coppola introduced his father. Seeming to understand what the crowd was thinking, he said that Sofia Coppola was unable to attend due to work commitments.

I like his look. He's giving me a young Victor Mature here: 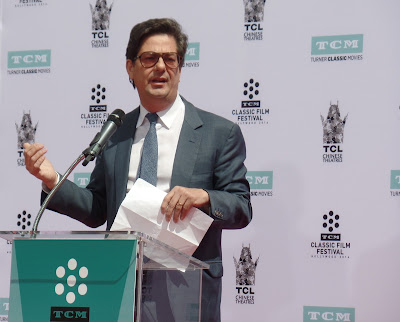 And then the great Francis Ford Coppola made his appearance. His speech was short, but sweet: 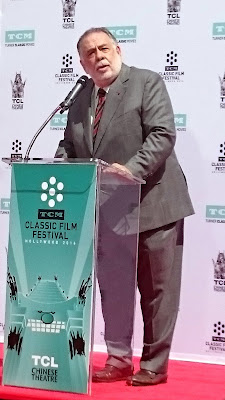 I had to keep reminding myself that I was looking at one of the most celebrated directors in the history of cinema. While he definitely exudes the confident charisma of the famous and accomplished, he seems more like that cozy uncle who loves to cook and makes his own sauces. An amusing thought, because I think that is also true of Coppola.

He was so kind and thoughtful, making sure to wave to the fans and smile in the direction of every camera: 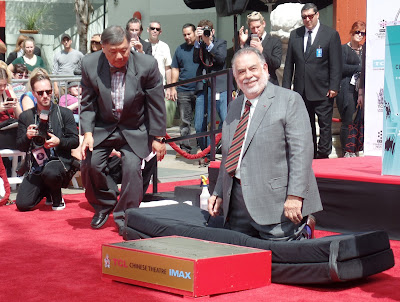 I remember that lady with the ponytail from previous ceremonies. Jerry Lewis teased her mercilessly in 2014 (doing his job so to speak). This year and Christopher Plummer in 2015 must have felt like a vacation: 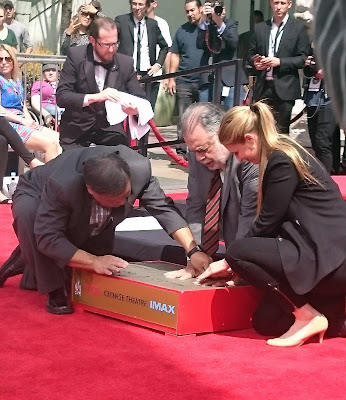 As he pressed his palms and feet into the cement, the photographers shouted out requests for various poses, as they do. He complied with every single request, and seemed thoroughly amused by it all: 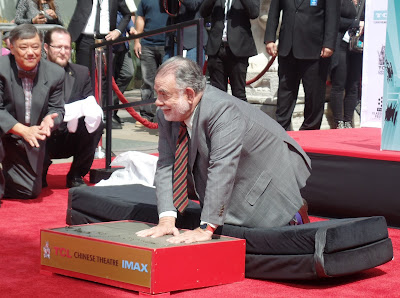 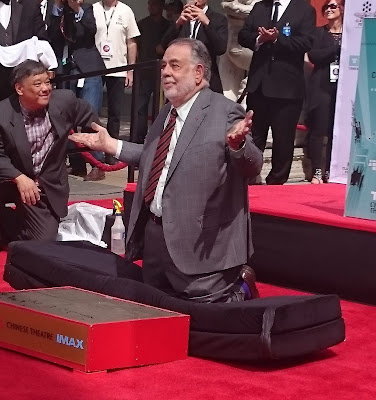 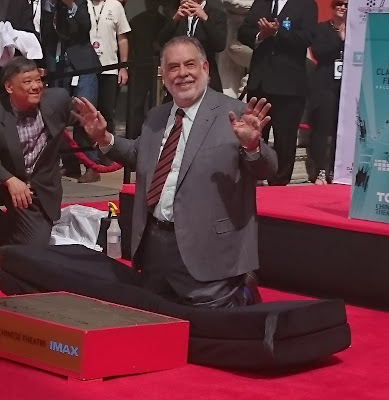 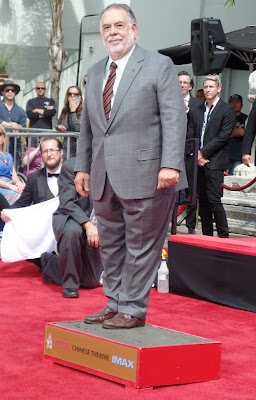 Then Coppola's wife of fifty-three years, Eleanor, and Roman came out for photos. I love the way she's looking at him in this pic. So much affection: 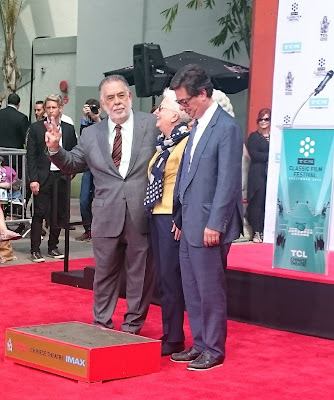 Sister Talia Shire and granddaughter Gia also joined the group. It's clear this is a close-knit family. They are so relaxed in each other's company: 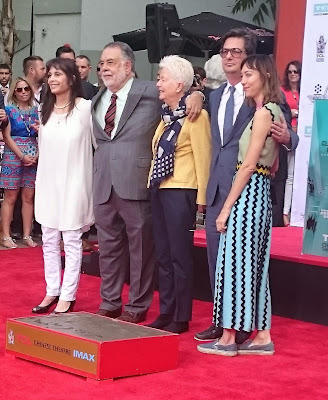 Then Bogdanovich was brought out for pics. It was funny to hear the photographers yell over and over again for him to smile to no avail. I mean, not smiling is his thing! Like Posh Spice! I shouted "Pull a long face for me Peter!" But of course it was too noisy for him to hear me.Or maybe he did hear me and complied? 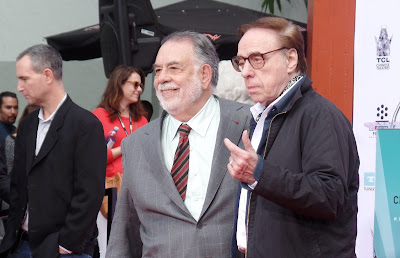 Look how happy Coppola is here! This was the most uneventful, and shortest of the hand/footprint ceremonies I have attended, but I loved soaking up the laid back, congenial vibe: 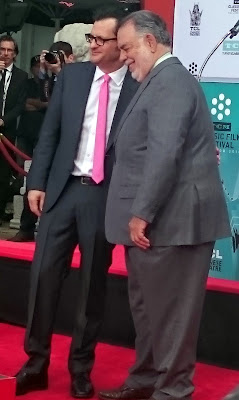 And here they are, still wet: 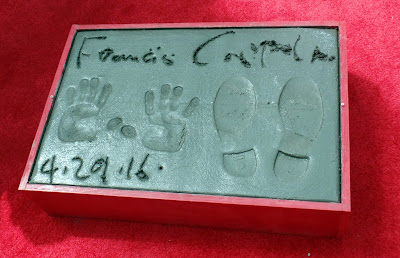 Later in the festival, I realized I hadn't ever looked for the hand/footprints from previous ceremonies I had attended. I had a bit of trouble finding Christopher Plummer until an attendant at the theatre door told me that newer prints are closer to the building. Makes sense: 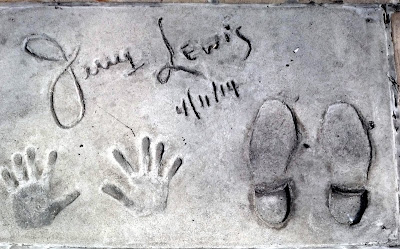 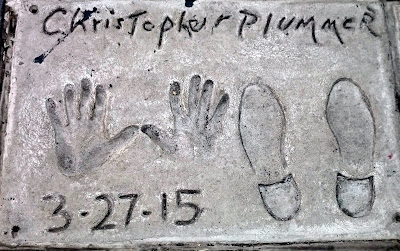 It was delightful to spend another beautiful morning watching a great name in the world of film being honored in this way. Each year is a unique, and extremely enjoyable experience. It's always worth missing a couple of films to attend.