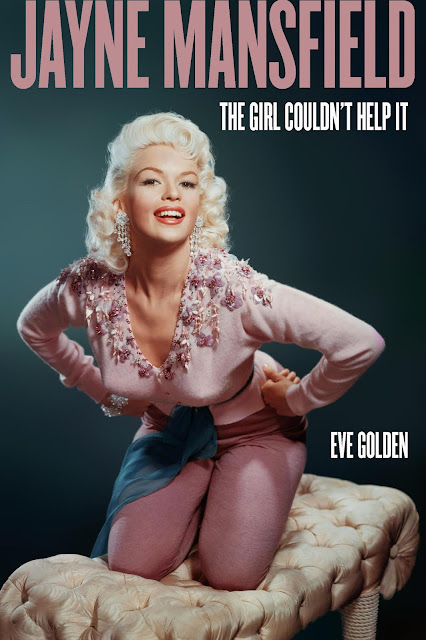 Jayne Mansfield: The Girl Couldn’t Help It
Eve Golden
University Press of Kentucky, 2021
I’ve always enjoyed Jayne Mansfield as a bubbly, squealing glamour icon: fun, but not much more than that. Thanks to a new biography of the actress by Eve Golden, I have a new appreciation of her. There’s a lot to love about this genuinely warm, talented, and uniquely appealing woman.
It’s stunning to think about the speed with which Mansfield ripped through life. To have a packed-full biography of over 300 pages for a life of thirty-four years is both remarkable and exhausting. By page seventy, I was astonished to realize that she was still only twenty-two.
Mansfield married as a teenager and became a mother soon after. Somehow she fit in college and her first performances on the stage in university productions. Hollywood followed soon after. Her first husband left the picture and Jayne was a single mother while she struggled to get herself before a movie camera.
The career that followed was remarkable. It wasn’t the enduring Hollywood stardom Mansfield wanted, but in the end she’d created a fascinating body of work in barely over a decade. The ‘A’ list years didn’t last long. She was a sensation in The Girl Can’t Help It (1956) and Will Success Spoil Rock Hunter? (1957), but what came before and after is equally, if not more interesting.
In the early years of her career, Mansfield hadn’t cultivated the goofy, squealing sexpot image that brought her to the peak of her fame. She was sultry and understated in her screen debut, Female Jungle (1955). In bit parts for films like Illegal (1955) and Hell on Frisco Bay (1955) she was attractive, but subdued.
Once she broke out and introduced the world to bubbly Jayne, she kept that persona for the rest of her life. She’d use it in her successful Las Vegas stage show with her second husband, muscle man and reluctant actor Mickey Hargitay, for public appearances and guest roles on television variety shows, and later as a nightclub performer.
However, when it came to acting, Mansfield showed she was capable of a lot more. As a young ward of Dan Duryea in The Burglar (1957) she’s moody and edgy, but also vulnerable. After her brief rush of big Hollywood success, she also showed fascinating depths in a series of European productions, from a remarkably soulful performance as a strip club headliner in Too Hot to Handle (1960) to an entertainingly campy, but also hard-edged performance as a thief in Dog Eat Dog! (1964) that would not be out of place in a John Waters movie (the director was incidentally heavily influenced by Mansfield).
The films were just a part of decades of constant work and chaos. Golden had a massive task in uncovering the details of a busy life that was full of publicity that often obscured the truth. There are three marriages, four children, affairs, supermarket openings galore, a well-publicized friendship with a so-called Satanist, and a custom-made Pink Palace in the mix as well. Golden is often forced to offer an array of possibilities when the truth is impossible to determine, but this experienced biographer has never been daunted by that kind of a challenge and she crafts an entertaining, complex, and revealing story out of the mass of details.
Golden has always shown a humorous appreciation of the absurdities in her subject’s lives while remaining respectful of their humanity. Here that impulse is especially welcome. She constantly draws a distinction between Mansfield’s public image, which inspired frequent mockery and the real woman, who despite many questionable actions was essentially intelligent and kind-at-heart.
In the end, Jayne remains a bit of a mystery, because as much as her life was an open book; she didn’t seem to even know herself how to write the next chapter.
Many thanks to University Press of Kentucky for providing a copy of the book for review.
Posted by KC