On Blu-ray: Elvis Sees Mid-Century Seattle in It Happened at the World's Fair (1963) 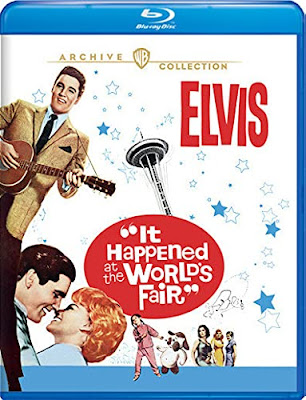 There’s not one memorable song in It Happened at the World’s Fair (1963), a dire condition for an Elvis musical, but there are pleasing elements to this film that never quite comes together. I recently revisited it on a new Blu-ray from Warner Archive.
Elvis is Mike, a pilot who wants to start his own flying business. He and his copilot Danny (Gary Lockwood) hitch a ride with a fruit seller (Kam Tong) his niece Sue-Lin to Seattle to do business. There the World’s Fair is in full swing, but all Elvis cares about is nabbing an attractive nurse (Joan O'Brien) he meets in the fairground’s infirmary when he has Sue-Lin in his charge and she gets a stomachache from over eating.
There is a plot of sorts, with aspects about courting women and stranger danger that haven't aged well,  and songs and romance that basically fizzle. The mid-century locations are the draw here. As a native Seattleite, it was an extra delight to see my hometown in the early sixties at the height of a defining event, but there is a more general appeal in getting a time capsule view of fair.
As much as the city has changed over the years many elements of the fairgrounds remain the same from the Space Needle and the arches at the Pacific Science Center to the Mural Amphitheater and the monorail. What’s fun about the film are the vintage details in the midst of these enduring structures.
One of the movie’s bright spots is Vicky Tiu as Sue-Lin. She’s an adorable kid, with her two perfect braids, impeccable dress, and a straw hat decorated with a pair of cherries. Tiu is also a charming actor and much more appealing as a sidekick to Elvis than O’Brien is as a romantic partner. As good as she is this would be Tiu’s only film; she had bigger plans. She is now Vicky Cayetano, a respected civic leader in Hawaii, president and CEO of the successful United Laundry Services, and a former first lady of the state.
The movie is also notable for featuring the first screen appearance of Kurt Russell, in his child actor years. He is in two scenes, and he kicks Elvis in the shin in both. Not a bad debut.
The sole special feature on the disc is a theatrical trailer.
Many thanks to Warner Archive for providing a copy of the film for review.
Posted by KC