On Blu-ray MOD: Clara Bow and Gary Cooper in Children of Divorce (1927) 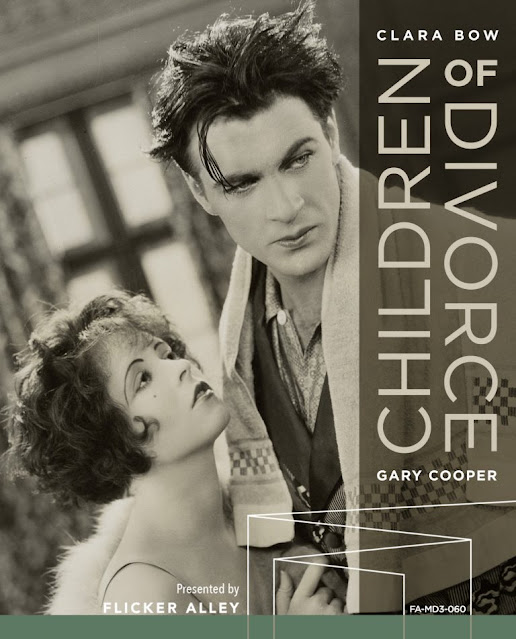 Clara Bow had a knack for communicating her emotions so clearly that you can't help feeling them along with her. If she grieves, you grieve.

While Bow is rightfully beloved for the way she embodied the youthful energy of the jazz age, she was even better when a moment required deeper emotion. Children of Divorce (1927) is a showcase for Bow’s considerable and considerably underappreciated dramatic skills. I recently marveled again at her performance via a new Blu-ray-MOD release from Flicker Alley.

It’s a shame that Paramount production head B.P. Schulberg refused to give Bow better roles, because if he had she probably would have been better remembered for the full breadth of her talents. As it is, she got unimaginative scripts like Children of Divorce, which is essentially a tale of wealthy people making each other miserable because they won’t fight for love.

The film works though and that is primarily due to its stars. As childhood friends who grow up into messy romantic entanglements, Bow, Gary Cooper, and Esther Ralston are deeply appealing. In the case of the latter two, that has more to do with the simple pleasure of watching them in action, but when it comes to this appealing duo, that is more than enough.

On the other hand, Bow has everything: beauty, charisma, and the deepest feeling for tragedy. It is well known among silent film fans that the actress only needed a little mournful music on the set to bring up real tears for her scenes, which came easily when she remembered her painful childhood. Those glistening eyes project pain in a visceral way, as does the subtle flicker of emotions across her face.

Clara Bow’s instinctive, raw performance style gives Children of Divorce a weight it could not otherwise have. Josef von Sternberg was hired to film additional scenes when original director Frank Lloyd’s footage was deemed unsatisfactory and he marveled at Bow, later sharing his disbelief that Schulberg didn’t make the most of her remarkable talent.

Ultimately, her skill could not be obscured. Even in this uninspiring story, she is heart-rending and elicits full empathy from the viewer. Who else could get away with moistening the flap of an envelope with her own tears? It sounds silly. She makes it devastating.

Special features on the disc include the documentary Clara Bow: Discovering the ‘It’ Girl (1999), which is a carry-over from the label’s 2016 DVD/Blu-ray release of the film. There’s also an image gallery with an interesting variety of photographs and promotional images related to the production.

Many thanks to Flicker Alley for providing a copy of the film for review.