On Blu-ray: Treat Williams in a Break-Out Performance, Sort of, in Prince of the City (1981) 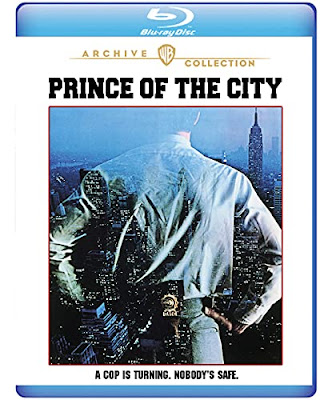 Prince of the City (1981) isn’t the cop movie I expected, but in these times, it was the cop movie that made sense. I recently saw the film for the first time on a new Blu-ray from Warner Archive.
The begins like a typical police flick, with chaotic drug busts, joking banter between cocky officers, and undercover men swaggering around in belted-leather coats and bell bottom suit pants. We are introduced to an elite narcotics squad, a group so respected that these “Princes of the City” are allowed to do their work with little supervision. Unsurprisingly, that leads them to engage in unethical behavior, sometimes to get the job done, but also to line their pockets.
Treat Williams stars as Detective Danny Ciello, the man who changes the narrative from free-form policing to the ugly business of facing consequences. He agrees to go undercover to fight corruption, but quickly finds that he and the men he works with are too much a part of that corruption to avoid scrutiny. He finds himself in the position of being forced to betray those he loves the most.
I understand why Treat Williams was nominated for both “Best” and “Worst” actor for this role. Apparently his charismatic turn in Hair (1979) played a role in winning him the part, and he shows that same loose, irresistible vibe here. There are moments though when he goes over the top and it can be taken as either too much or the intense, but honest emotions of a man who is heartbroken, frightened and trapped. I think both are true.
As charming as Williams is, this film wasn’t the breakthrough role that led to true stardom. He was certainly deserving of that, but 1981 was the start of an era where the men at the top of the box office didn’t emote so darn much. He was not a Stallone or Schwarzenegger; he was even more tender than Harrison Ford. Of course, he has had a fascinating and enduring career, but seeing him in this, you wonder what bigger stardom could have brought him.
The rest of the cast is full of rich, realistic characters. Some of them, like Jerry Orbach, Bob Balaban, and Lindsay Crouse were just at the start of careers full of intriguing roles. Everyone here feels real. You believe they are anxious, but strong policeman’s wives and bureaucrats who are determined, but often lacking in understanding. Most compelling are the corrupt cops, who have a tighter bond with each other than even their own families. They sit close on lawn chairs, in intimate conversation, swilling beer out of amber bottles: manly but connected in a way more familiar to female friendships.
While much about the outcome of the story is inevitable, and in some ways easy to see without knowing the details of the real story upon which it was based, the increasing tension is expertly communicated by director Sidney Lumet. He increasingly narrows his focus, amplifying the feeling of Williams’ isolation and fear and the terror of men facing the consequences of their actions. In doing so, he’s always in touch with the emotions of his characters, men who take pride in hiding their emotions, which is why the film feels so revelatory.
The featurette Prince of the City: The Real Story is a part of the special features on the disc and it helps to put the film in perspective. A lot of the people portrayed in the film are interviewed here, including the man Detective Ciello was portraying, former Detective Robert Leuci.
Many thanks to Warner Archive for providing a copy of the film for review.
Posted by KC