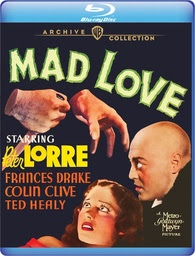 I wrapped up spooky season with a marathon watch of new Blu-ray releases from Warner Archive. They're a mixed bag, but overall I had a good time with this varied bunch of thrills:
Mad Love (1935)
A bonkers Grand Guignol thrill ride, this MGM flick takes the eerie body part transplant horror of The Hands of Orlac (1924) and transforms it into an unhinged, ghoulish tale of obsession. Pop-eyed Peter Lorre stars as the brilliant Dr. Gogol, who has an unhealthy fixation on horror theater actress Yvonne Orlac (Frances Drake). She finds him creepy and is deeply in love with her husband, the famous pianist Stephen Orlac (Colin Clive). When Stephen’s hands are damaged in a train accident, Gogol attaches the hands of a recently hanged knife murderer, bringing out murderous impulses in the hapless musician. The film is much weirder than this basic plot though, with a wax figurine, a drunken housemaid, and one of the most bizarre and horrific costumes of classic Hollywood all in the mix as this wild tale roars to a close in just over an hour. Special features on the disc include a trailer and commentary by Steve Haberman. 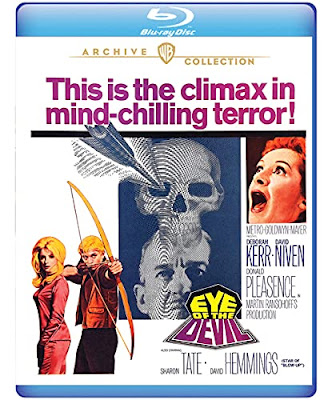 Eye of the Devil (1966)
The story of this UK chiller is like a less colorful version of The Wicker Man, with a similarly enclosed country society looking for a solution to its crop problems. David Niven is the wealthy marquis whose family has long held responsibility for the local agriculture. Deborah Kerr is his confused and distressed wife; she knows something isn’t right when her husband gloomily leaves their London home for the ancestral Chateau in France. The film looks gorgeous on Blu-ray and it has its striking moments, but for the most part it drags and there’s not much mystery to the plot. It is best remembered today as the official screen debut of Sharon Tate (it took so long to be released that Don’t Make Waves [1967] was the first time audiences saw her onscreen). While her performance can be stilted, possibly because as a novice she was relying heavily on instruction from her director, Tate’s presence is electrifying beyond her stunning beauty. In a scene where she is whipped by Niven, she also shows willingness to embrace the perversity of the material. She would have really made something of the increased cinematic freedom of the seventies. Also at the beginning of his career, David Hemmings is equally stunning as her screen brother. 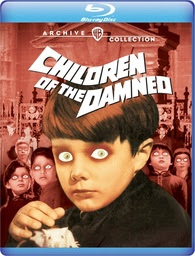 Children of the Damned (1964)
This thematic sequel to Village of the Damned (1960) doesn’t have the iconic chills or sturdy plot of its predecessor, but it is not without interest. Here the action moves to the city, where another batch of oddly expressionless kids has arisen out of seemingly immaculate birth. With glacial pace it is revealed that six children, each of them of different nationalities have the same mental abilities of their blond country cousins. This mini United Nations of supposed psychopathic space children isn’t nearly as amusing though, partly because they refuse to talk for most of the film’s running time. Instead they use the aunt of the head child Paul (Clive Powell) to speak for them via their telepathic instruction, though it is never revealed why they would do this if they are capable of speech and occasionally inclined to speak for themselves. The story doesn’t add up to much and it never picks up momentum, but there are a few striking sequences that make it just worth watching, especially for Village fans. Special features on the disc include a trailer and commentary by the film’s screenwriter John Briley 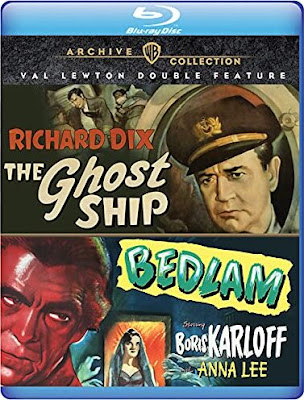 The Ghost Ship (1943)/Bedlam (1946)
Director Mark Robson was one of the best interpreters of producer Val Lewton’s horror vision and this pair of films demonstrates the diversity of his talents. He was adept at creating a mood of dread with economy and simplicity, which was perfect given the limitations of his budgets.
Richard Dix had been a heroic screen figure since the silent age when he was cast against type in The Ghost Ship as an unhinged sea captain who has an unhealthy obsession with authority. He was somebody audiences trusted, just like the men on his crew who don’t want to believe that their leader is capable of doing wrong. This reflection on the fallibility of leaders and those who follow them is especially effective because it has no score but the occasional sea shanty from Lewton regular Sir Lancelot (his voice is so mellifluous that even when he speaks he sounds like he is singing). The soundtrack is instead filled with creaking masts, rushing wind, and the clattering of chains; evoking the crew’s isolation at sea. The cast is full of interesting characters, including an early career Lawrence Tierney in a goofy cap, the expressive Skelton Knaggs who plays a mute (though his thoughts serve as narration), and the sole female character, Edith Barrett as the soothing voice of reason in a tense, atmospheric tale.
Bedlam presents two worlds: that of the powdered and perfumed rich and the straw-lined despair of an insane asylum. Boris Karloff is the slippery overseer Master Sims and Anna Lee is Nell Bowen, a lady of society who protests the treatment of the residents. She finds herself behind bars with those she aims to protect thanks to the machinations of Sims, but finds hope with the support of a morally solid Quaker. Bowen is subject to a pair of horrors: losing her freedom and realizing that society does not support her or true justice. Her vulnerability to the system is chilling.
Special features on the disc include theatrical trailers and commentary on Bedlam by Tom Weaver.
Many thanks to Warner Archive for providing a copies of the films for review.
Posted by KC