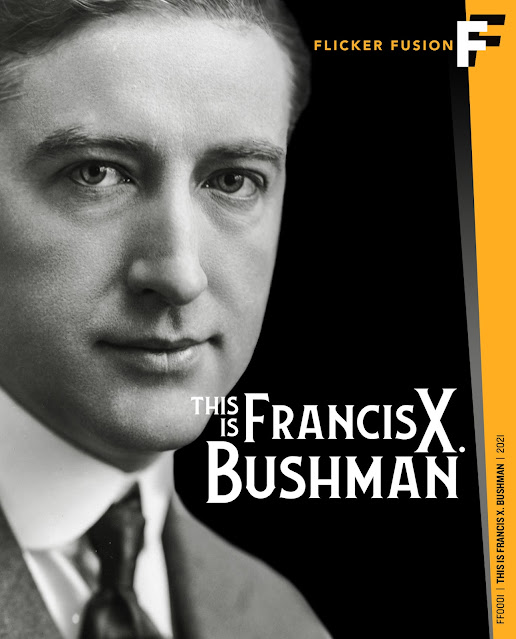 Before I watched this fascinating Blu-ray release about actor Francis X. Bushman, all I truly knew about him was that he’d starred as Messala in the 1925 version of Ben-Hur: A Tale of the Christ. Other than that, I had a vague idea of what he looked like and was intrigued by the novelty of his middle initial. Now, thanks to the documentary This is Francis X. Bushman, I’ve had a brisk, but thorough crash course on this charismatic man.
The film, directed by long-time Bushman scholar Lon Davis is part of a new set from the Flicker Fusion label at Flicker Alley. While the documentary is only an hour, the set has a variety of special features, including an informative introduction by Davis, an extensive image gallery, a 1957 episode of the radio show Suspense: The City That Was featuring Bushman late in his career, a trailer for Ben-Hur (1925), and perhaps most importantly, four Bushman films, two of them fragments (The Thirteenth Man, [1913] and The Marriage Clause [1926]), the others fully intact (Dawn and Twilight [1914] and Two Men and a Girl [Love Conquers All] [1911]).
Bushman’s grandson, film industry veteran Chris Bushman narrates the documentary, and while he wasn’t born to narrate, it was interesting to get a more intimate perspective at times. That family involvement does affect the objectivity of the film, but it isn’t hard to read between the lines: Bushman’s wives did not think much of him as a husband. Lon Davis’ introduction includes more specific stories of the romantic wreckage he left in his wake. The film is also greatly enhanced by recordings of the elder Bushman dramatically recalling memories of his past.
Aside from mishaps with the women he knew, Bushman led a chaotic, but essentially good life. He was a romantic idol in the early silent years, often paired with Beverly Bayne (who would be his second wife) and one of the most popular film actors in the world. Ben-Hur came at the end of his peak star years, but his career was far from over at that point. A combination of a nostalgic audience and industry respect kept him in work for the rest of his life, with television roles, character parts in movies, and radio show guest appearances which demonstrated that he was not one of those silent movie stars sunk by an unsatisfactory voice.
It’s a good thing he did manage to keep making money, because as the documentary reveals, he was also very good at spending it. His is an interesting story though, because you can see how he could have been heading for disaster and dying in poverty, but he always managed to pull ahead. It’s an odd combination of luck, charisma, and willingness to try new things if it keeps the cash flowing that kept him afloat.
The films in the set reveal a complex performer. An early body building fan, he had a beefy action hero allure (before that was really a thing), but he was capable of being sensitive, romantic, and vulnerable. To be able to all that and take on a stunt like the fast-pace four-horse chariot race in Ben-Hur is phenomenal.
I came away from this set appreciating Francis X. Bushman and impressed by how much I’d learned. It’s a shame that so many of his silents are now gone, but what remains is fascinating.
Many thanks to Flicker Alley for providing a copy of the film for review.
Posted by KC