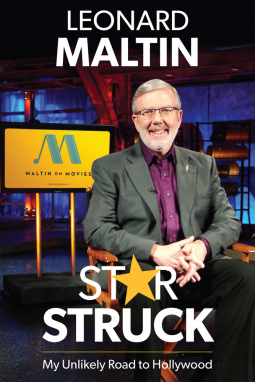 Star Struck: My Unlikely Road to Hollywood
Leonard Maltin
GoodKnight Books, 2021
Leonard Maltin has had the kind of career where several elements on their own are remarkable: the phenomenal success of his movie guides, a long run on Entertainment Tonight, and his work as a popular USC film professor among them. Add to that a wide array of fascinating side projects, including a long working relationship with Disney and Maltin on Movies, an interview podcast he co-hosts with his daughter Jessie Maltin. This self-described film nerd shares the story of his remarkable life in a memoir full of the enthusiasm and positive energy for which the critic is famous.
Maltin claims that luck has played a large factor in his success and while it is clear that has often been the case, even more so his “luck” has been showing up and doing the work. As a film-obsessed teen in New York City he was already writing articles about the movies, eventually publishing a movie magazine with a healthy subscription base. He rode the momentum of that early start to Hollywood where he countered the bad reputation of the town by approaching his work with honor and respect for others, something he managed to do while still getting scoops and keeping his employers happy.
One of the most amusing aspects of Maltin’s story is that he has spent his adult life in the unusual position of being both a fan and a celebrity. A part of him remains that young film obsessive, thrilled to meet the stars of Hollywood past, but his television career made him so recognizable that the famous considered him own of their own. The result: situations like Maltin and his wife befriending movie fan Hugh Hefner and regularly watching movies and awards shows at the Playboy Mansion, with the critic taking off later in the evening to do his Entertainment Tonight duties for the latter.
It is clear that Maltin’s wife Alice has been instrumental in his long-running success. His loving tribute to her is one of the most touching elements of the book. In addition to being an ideal mate for the critic, she has an instinct for business that kept him going in his early years and continues to be an important part of the Maltin enterprise that now also includes Jessie Maltin.
Maltin is a great storyteller. For that reason the chapters he writes in praise of his less famous friends are just as fascinating as his memories of meeting stars like Bette Davis, Barbara Stanwyck, and Olivia de Havilland. His enthusiasm for interesting characters and people in general is contagious. It’s pleasant reading, light and easy, but full of interesting details of a busy life.
Many thanks to GoodKnight Books for providing a copy of the book for review.
Posted by KC