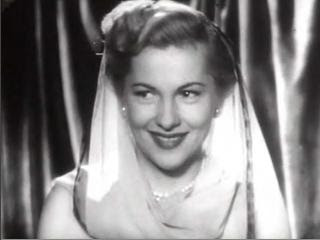 Today Ms. Joan Fontaine turns 92 years old. In celebration, here is a selection of her movies that, for good or ill, has always fascinated me:

Jane Eyre (1944)
I’ve always felt that Fontaine should have received more praise for her work in this gothic romance. It is miraculous that she was able to pull off such a complex, but subdued performance opposite supremely hammy Orson Welles as Edward Rochester (I found him amusing, but I can see how his bluster might turn some against the movie). They’re an odd pair, but Fontaine makes up for that with her delicate portrayal of a heroine who is strong and wise, but also painfully vulnerable.

September Affair (1950)
I’ve always found it interesting that though I tend to see Joan Fontaine as a romantic heroine, she has rarely had great chemistry with her male leads. That’s why it is such a pleasure to see the cozy affection she enjoys with Joseph Cotten in this low-key drama. Their bond is the best element of a simple story about a couple who decide to grab an opportunity escape the world together.

Born to Be Bad (1950)
This swift little drama isn’t very good: the stars deserve much better material and the plot alternates between unbelievable and ridiculous, but I keep going back to it. Yes Fontaine has a goofy hairdo, and she is sometimes unbearably coy, but it is fascinating to see her go against type to play a bad girl whose bag of tricks isn’t quite deep enough to make her a true femme fatale. The interaction between delicate Fontaine and blunt Robert Ryan has a ragged energy that adds a jolt to the drama. I also wonder if there’s a bit of the real Fontaine in this calculating woman; I have a hard time believing she was as angelic as she claimed in her autobiography.

Letter from an Unknown Woman (1948)
Fontaine is at her most effective in this bittersweet romance about a woman obsessed with a philandering pianist. As she takes her character from a dreamy childhood crush to a more adult longing, Fontaine demonstrates the destructive effect of consuming passion with painful precision. The production itself is also top notch, with lush settings, a strong script and Louis Jourdan as the perfect romantic cad.