This Halloween season, I thought I’d explore the dark side of silent movies in the hopes of finding some new favorites. I was most impressed by this trio of moody, stylish flicks. These aren’t your typical boogieman movies, but rather dramas with horrific elements and an atmosphere of suspense.

The Unknown (1927)
There was a formula for Lon Chaney’s movies just as much as there was for Esther Williams’ (how’s that for a comparison?). He tended to play downbeat, down-on-their-luck characters who had some sort of mental or physical (or both) deformity, and who never, ever got the girl, often because he would sacrifice his life to save her. This horrific tale flips some of those conventions by throwing in a few surprises. Chaney is an armless knife-thrower who is in love with a girl (a nearly unrecognizable Joan Crawford in an early starring role) whose father owns the traveling carnival for which he performs. He hopes to win her, because she is repulsed by the feel of a man’s arms around her, but his plans are complicated by a burly body builder. Chaney will do anything to get Crawford, and his determination feeds most of the horror, but he is at his most unsettling when he reacts to the news that his sacrifices will not help him to fulfill his dreams. It is a startling, raw moment. Chaney might have been legendary for his elaborate disguises and make-up, but here is proof he didn’t need them to turn in a gut-wrenching performance.

The Man Who Laughs (1928)
This period flick is an unusual combination of horror, drama and romance. Conrad Veidt stars as a traveling performer whose face has been carved into a ghastly, permanent grin. Though the set-up sounds gruesome, this can be a surprisingly tender movie, with warm relationships and many upbeat moments. At first Veidt seems to be portraying a Lon Chaney character, but while he has similar struggles, he is not nearly as tragic. However, there is also plenty of horror. The early scenes are particularly chilling, with glimpses of hanging skeletons swaying in the wind, and the description of the shudder-inducing act that causes Veidt’s deformity. 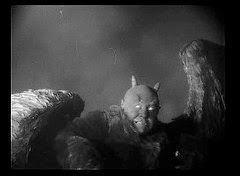 Faust (1926)
Emil Jannings is such an amusing, clever devil in this horror fantasy that you may find you don’t give two figs for Gösta Ekman as the hapless Faust. His simultaneously amusing and frightening performance is enough to make the movie a classic, but its special effects make it revolutionary. With clever use of light, fire and perspectives, director F.W. Murnau creates an astonishing world of magic and dread.