Book Review: The Studio Age Reign of Actresses Lives on in France 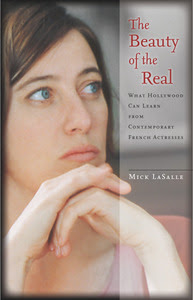 The Beauty of the Real:
What Hollywood Can Learn from Contemporary French Actresses
Mick LaSalle
Stanford University Press, 2012

I love Mick LaSalle's books about the stars in pre-code movies, Complicated Women and Dangerous Men. Both have been bedside table staples for me as I continue to be obsessed with this period in film. For this reason, I was intrigued by a comment LaSalle made on Twitter about his most recent book. He said that it was "kind of like Complicated Women only they're all alive and talking to me." Well I had to see what that was all about.

When I saw that the book was about contemporary French actresses, I was still interested, but I wondered if it would be of interest to those of you who are kind enough to read my reviews. I've concluded that it depends somewhat on why you like classic films. The Beauty of the Real is ideal for those who turn to the classics out of frustration with the style of modern Hollywood movies. I can also see it appealing to movie fans who admire the strong female characters in studio age Hollywood films.

I went into the book expecting a collection of interviews, but it is more complex than that. LaSalle has used his conversations with several prominent French actresses to get the best perspective on the film industry in France, which is apparently doing a much better job telling stories about women. He profiles these women in varying degrees of detail, while also examining some of the issues that affect them. As much as you may think conditions have improved for actresses in Hollywood, LaSalle is here to tell you that we have a terribly long way to go.

We are far from the days when the movie industry relied on the box office power of women attending the daily matinee. Studios catered to this audience with films focused on issues that concerned them and starring some of the most mesmerizing actresses to appear in films. Think Barbara Stanwyck, Joan Crawford and Bette Davis.

LaSalle argues that this kind of powerhouse acting and attention to women's issues is happening right now in France. He makes a good case too. Female directors are so commonplace there that their involvement in a film does not attract special notice. They simply work, and excel, and they tell stories to which they can relate, just like the male filmmakers that dominate Hollywood.

In France, filmmaking is looked upon as art before business. Actresses like to talk about their craft, and that's fun, because you get a sense of their passion for performing and becoming these rich characters. It never occurred to me how rarely I hear movie stars discuss their work in such detail. I enjoyed learning more about the process of actresses as diverse as Isabelle Huppert, Catherine Deneuve and Nathalie Baye.

These women are enjoying careers that last decades. They are allowed to be sexy onscreen well into their sixties as they are given the opportunity to mature before their public. French movies don't have nearly the budget of a typical Hollywood production, so filmmakers eschew special effects for deeper characterizations that provide a satisfying slice of humanity.

I can see how as a fan of classic Hollywood, the work of these women would appeal to me. Thanks to a few French films streaming on Netflix, I've already had a taste of that.

It took me a while to get hooked by The Beauty of the Real. Isabelle Adjani takes a real beating in an early chapter, and while I didn't necessarily disagree with the criticism, I thought the tone a bit cruel. In many sections I was also reminded of a German exchange student I once knew who was fond of telling me what was wrong with America. The book could almost be called Why Hollywood is Lame, but honestly, these things need to be said. Clearly the most powerful movie industry in the world needs to wake up to the other half of the human race.

Once I got over those bumps, I started to enjoy learning about these women and the kinds of films being made in France in recent years. The overall tone gets warmer and more passionate as the book progresses.

This is a fantastic introduction to current French films; it has everything you need to know to get a basic understanding of the industry. It offers the excitement of newly-discovered treasure. I was happily overwhelmed by the many things I learned reading The Beauty of the Real and I think tracking down and watching these films will keep me busy for a long time.

Deepest thanks to Stanford University Press for providing a review copy of the book.