That English battlefield looked a lot like Southern California to me!

The above was said loudly in the line for the ladies' loo after a screening of the newly-restored Richard III (1955) at Seattle International Film Festival 2013. The lady got a laugh, and aside from the humor of what she said, I think she snapped everybody back into the real world. Olivier's masterwork can put a spell on you, and in its newly restored form you can soak up all its glory without distraction. And just to clarify, the Battle of Bosworth scenes were filmed in Spain.

The SIFF staff member who introduced the film noted that the restoration by Sony was good, but not too good. He explained that sometimes a restoration can clean up the print so much, that it looks too slick and over digitized. Consciously avoiding that problem, this restoration was made to emulate the look of 35 mm. I was so glad he said this, because I'd never thought about it before, but I had noticed that overly-sharp look in some restorations. This one did have a warm, textured appearance that I now recognize as the look of film. Oh man am I going to miss that gorgeous, grainy 35 mm.

My first thought in the opening scenes was gaw--look at all that color! Bright reds, blues and golds. It just smacks you in the face. And Richard opens with a coronation scene, so you have all the power of that ritual to amp up the vivid look of the scene.

For those not familiar with this particular Shakespearean play, Richard III is essentially about a psychopathic duke who will do anything to be king. Once he gets to the throne, he loses it in a gory fashion. Simple plot, twisted execution.

As director, producer and star, Laurence Olivier is an irresistible force in Richard. I swear he looked amused by his big, fake nose and stiff black wig, and he relished every evil maneuver his Richard made. Olivier clearly loves the role. He is serious, but seriously at play as well. The humor makes you relax, and then he hits you in the gut with a dark glare or a smoothly repulsive phrase. 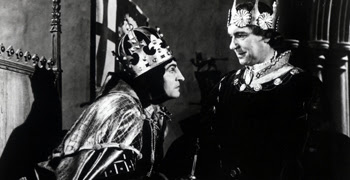 Olivier's Richard seduces almost because of, rather than in spite of his evil. Everything about him stands out, from the blackness of his hair to the sharp hues of his costumes. He's acting with the best of British talent, but when he is off screen, it's hard to care about anyone else.

The cast is mesmerizing though. Holy cow, this movie has everyone. John Gielgud, Ralph Richardson, Cedric Hardwicke, Claire Bloom. They perform as if on stage, with that sort of outsized projection, but the style does not overwhelm outrageous proceedings.

In fact, there are moments in Richard that achieve the most startling intimacy. Olivier crafted his masterpiece with the deepest respect for language. Music is used for great dramatic effect, but more often than not the actors speak their lines against a background of silence, and you feel the urge to lean in and capture every nuance.

Most of the film takes place on sets, as if stage bound, so it is startling to see the final battle scenes on location. It's almost too jarring, but necessary. It is as if Olivier is reminding us that while we have been enjoying what has been essentially the performance of a play, this is a film, and it needs to breathe.

Click here for more information about the films at SIFF 2013.

And here is my full coverage of the event.
Posted by KC