I can't even remember the last time a movie stunned me like Phase IV (1974). This bizarre, oddly-paced science fiction flick had me so mesmerized that I lost track of time. Sometimes that doesn't even happen with a film I love. That feeling of leaving the theater in a daze, confused by the sunlight and activity outside, had become almost foreign to me. It was the perfect way to end Seattle International Film Festival 2013.

Phase IV (1974) was the only feature-length film directed by legendary title sequence designer Saul Bass. Apparently it bombed so badly on its initial release that he was never allowed to direct again. It found new life on television though, where a generation of film fans found it via late night showings, and possibly wondered in retrospect if it had all been a dream. Sometimes television is the best way to discover a movie like this, so maybe everything happened as it should.

It starts with a mysterious cosmic event that causes the ants on Earth to evolve, and gradually begin to dominate the planet. In hopes of stopping this invasion, a pair of scientists set up operations at a high tech compound in the Arizona desert, where the creatures have spread chaos while constructing strange towers and sweeping crop circles. 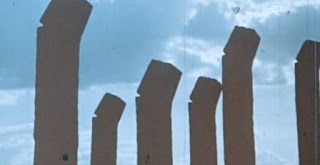 They are joined by a teenage girl who is a traumatized refugee from the insanity outside, and the catalyst for even more trouble inside the once impenetrable haven. The scientists butt heads; one wanting to kill the queen ant, the other wishing to communicate with these new intellectual superiors. As it turns out, they don't have much control over what happens. The ants have already decide their fates.

I don't want to tell you any more about what happens, because I am sure that part of the reason I enjoyed the movie so much was that I learned so little about it beforehand. There are plenty of familiar animal invasion clichés, but they play out in this eerily subtle way, slowly and quietly. That overall atmosphere of dread had me on edge the entire time, trying to anticipate what would happen next.

You learn more about these invaders than in a typical invasion flick. There are really two stories: that of the ants and that of the humans. Often they are kept meticulously separate, and I found an amusing difference in attention to detail between them. The human story is a bit of a mess. Our teenager from rural Arizona occasionally slips into an English accent, and after a long talk about the powdered and dehydrated food being the only thing available at the compound, there is a shot of the control room strewn with plates of uneaten, very non-dehydrated-looking sandwiches. 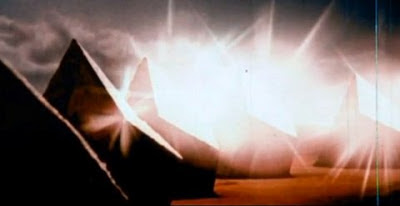 The ants, on the other hand, get careful handling. Their world is precisely filmed, with close-ups that somehow manage to capture, or at least make you imagine you are seeing, their emotions. I don't know how they made these creatures look like they were trained to perform, but it couldn't have been easy. In one particular scene in which a spider is attacked by a swarm of ants, I was certain I saw an "oh shit, I'm toast" look on the unlucky arachnid's face before it met its doom.

One of the legends of Phase IV was that it had a lost psychedelic ending which somehow managed to simultaneously explain everything and create even more mystery at the same time. This much sought after ending was found in Paramount Archives and restored for the screening, to be shown after the theatrical version.

The SIFF screening already had an eager audience. It was by far the most enthusiastic crowd I'd seen the entire festival. While waiting in the long line to enter the theater, a man shouted, "I guess Seattle really likes ants!" (Someone behind me mumbled, "What does that say about us?") Once the introduction for the screening began, there were whoops of excitement, loud applause and lots of people leaning forward in their seats, ready to catch every moment.

This wild crowd was rewarded with a great movie, and when the original ending credits rolled, there was more applause. Then for an unbearable minute, which felt ten times longer, we waited to see the ending Bass really wanted.

We had been told this version was trippy. Yep, it was. And if I hadn't seen much to remind me of the famous avant-garde Saul Bass design, it was because so much of it had been saved for this absolutely mind blowing, surreal sequence. Judging from the reaction in the theater, the crowd must have shared my feelings. It's like the first ending was a cupcake, and the extended version was a birthday cake with sparklers.

I don't think this unique flick would have flopped at the box office with a crazy ending like that. Maybe it wouldn't have been a huge hit, but it would have caused a minor sensation.

So Criterion Collection--are the rumors true? Are you really interested in Phase IV? Because this is one film that definitely needs a well-crafted DVD release.


All screen captures by KC from the trailer.
Posted by KC