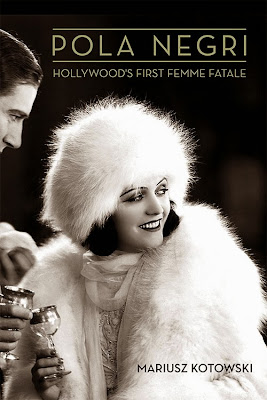 I have survived two wars, four revolutions and five marriages.

While the line above was written for a fictional movie, it speak a great deal of truth about Pola Negri. She stopped at two husbands, but otherwise, this tidy statement forms the basic framework for a life that was both blessed and cursed, devastating and intensely enjoyable. With his new biography, Mariusz Kotowski gave me my first proper introduction to Ms. Negri, and she was much more complex and sympathetic than I expected.

Though Pola Negri was one of the most popular Hollywood stars of her day, right up there with Pickford, Chaplin and Swanson, she is probably most famous today for the way she behaved when her lover, and reportedly fiancée, the overwhelmingly popular Rudolph Valentino died suddenly at 26.


The country, maybe even the world, lost its mind, but Negri out-grieved them all. There is the rumor that she fainted for the cameras at each train stop across the country as she traveled to the funeral . She wept, swooned and leaked sorrow from every pore at the service. Her fans thought she had lost her mind. Some sniffed that she was putting on a show, inappropriately grabbing for attention during an occasion of grief. Her reputation never fully recovered.

This was all I knew of Negri until I saw a Disney film called The Moon-Spinners (1964) a few years ago. I didn't know she had a cameo role in the Hayley Mills jewel caper; she just suddenly appeared, and it was impressive. Looking like the bust of a goddess, fully ripened into her sixties, Ms. Pola immediately stole the movie. She was cool, clever and beautiful in a way that was not only decorative, a force of nature. It took only that appearance for me to understand that Negri was deserving of more attention than as an emotional mourner.

In Hollywood's First Femme Fatale, you get to meet both of these Polas. She was certainly the emotional woman of the Valentino funeral. Some of the theatrics were cultural, an honest Polish reaction to pain. Still, it is odd that her audience should react so negatively to her dramatics. Isn't that what an actress was supposed to do? She was also the cool cat stealing every scene from Hayley Mills: intelligent, poised and well-practiced when it came to her craft.

Kotowski examines all of these aspects of Negri and tells an interesting story, if not one that goes very deep. She was a hard worker, taking to the stage as a teenager to support her mother and doing what it took to learn her trade. While she could put on airs once she became a star, and she insisted on luxury befitting her position, she never took it to extremes. There was a part of her that always remained humble. In a life of both horrible and brilliant luck, she often stacked things in her favor by simply being a generous soul and a great friend to many.

Negri was confident in herself and was thus never threatened by other performers. She presented herself as a product, much as Marlene Dietrich would later do, and this allowed her to remove her ego from her image. She befriended actresses as diverse as Marion Davies, Mabel Normand and Gloria Swanson, offering them support and sometimes getting it in return.

Kotowski lays out the facts of her life, friendships and work, demonstrating that she was not the hysterical diva of Hollywood legend. He finds that she was for the most part she was practical, a sound businesswoman and a magnetic presence on the screen even into the sound age. It's a balanced portrait, revealing both the missteps and the triumphs. As many of the people connected with Negri are now gone, he relies heavily on interviews with fellow film historians and biographers, which offer many interesting tidbits, though these sometimes lengthy passages can have the feeling of giving the story over to another author.

There were also multiple easily-detected errors in the text. Kotowski writes that Washington D.C.-born actress Ina Claire struggled in talkies because of her "Bronx honk"--he seems to have mixed up this stage actress with Clara Bow, whose voice has inspired that description. He also claims that alcoholism killed John Barrymore in 1936, though the actor passed in 1942. Again, this appears to be a mix-up as John Gilbert died in '36.

Kotowski also mentions that Loretta Young's daughter "Gretchen" cared for actress Mae Murray when she fell on hard times in her later years. Young did have a daughter, but her name was Judy. Gretchen was Young's name at birth.

These errors were disappointing, because there is so much that I like about this book. As one new to Negri, it was a brief, but fascinating introduction to the actress. However, if there were so many obvious inaccuracies, I have every reason to be unsure of the rest of the content.

Many thanks to University Press of Kentucky for providing a copy of the book for review.