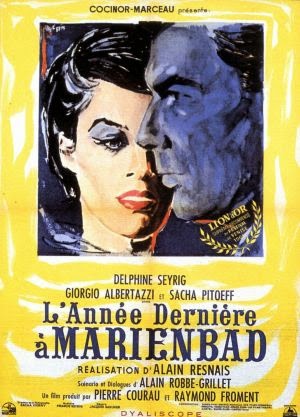 It was great to see a packed house last night for this most mysterious of Alain Resnais' films. That marvelous turnout felt like a tribute to the director, who died this March. The restored 35mm print was gorgeous, and so nearly flawless that the film felt almost modern, though timeless has always been the best way to describe it.

The story is simple, and the meaning behind it can be too, depending on your interpretation. A woman (Delphine Seyrig) taking a vacation in a hotel housed in an enormous chateau is pursued by a man (Giorgio Albertazzi, ) who swears they met and had an affair the year before. She is there with a husband (Sacha Pitoëff), or boyfriend, or is it a doctor? who seems to challenge the man in a deliberate, passionless manner.

It is never clear what exactly happened the previous year. Did they have a consensual affair? Or did the man rape her? Perhaps they didn't meet at all. It unfolds like a dream or the untidy patterns of thought. This is one of those films where it is endlessly fun to discuss what it all means. It becomes less amusing when you try to find a single solution. While it does engage the intellect, Marienbad is sometimes best left to the emotions.

I like to say that Last Year At Marienbad is my favorite zombie movie. There's no groaning or tearing of flesh, but plenty of blank-eyed, pale-skinned people with bags under their eyes stalking around. With the occasional exception of the three leads, the cast is essentially dead. They are beautifully dressed, perfectly groomed, with expensive jewelry and sleek, dark evening clothes, but you can almost see the decay from within. They are the idle rich, with nothing but luxury and endless entertainment to occupy their time.

While Marienbad has been compared to films like The Shining (1980) and Inland Empire (2006), and I can see the influence in both, it always reminds me of Carnival of Souls (1962). I don't know if director Herk Harvey could have even accessed the film before he made his one-off horror classic, but there are some remarkable similarities. A scene in Resnais' film where hotel guests dance stiffly, in spooky unison, is strikingly similar to Harvey's dance of the dead in the carnival pavilion scene. It's more glamorous, but the tone is very much the same. Amusingly enough, both flicks are also known for their ominous organ soundtracks.

That organ deliciously sets the tone for Marienbad. It's a bleary, doom-filled score, perfectly keyed to the camera that glides around like a specter, examining its static subjects impassively. Composer Francis Seyrig is the brother of the film's leading lady. I wonder how much that has happened in film? Apparently it is not the only time he wrote a score for one of his sister's films.

For the bulk of the movie, there isn't much difference between an immaculately-tended shrub in the lavish hotel garden and a woman in a Chanel cocktail dress. In pursuing the woman he swears to remember, the man brings passion to an otherwise airless atmosphere. For a rare moment, strings erupt on the soundtrack as the woman begins to react, to feel in a place where there is no emotion. She breaks a cocktail glass in a crowded room and it as if it never happened. The change in her never affects the other guests. While it may not be clear what exactly is happening, you feel the shift.

It's all puzzling and oddly understandable at the same time. A challenging, but pleasurable journey into mystery.

Check out my SIFF Gameplan to see what other classics are scheduled for this year's festival.