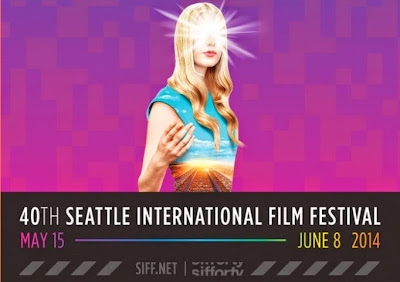 The 40th annual Seattle International Film Festival had its gala kick-off two nights ago and this city is ready to celebrate movies! I had a pesky gallbladder that needed to be removed earlier this week, but I'm determined to start reviewing films this Sunday. Funny how the promise of seeing Robert Mitchum on the big screen can speed up that healing.

I thought I'd share a little more about the films I plan to see this year, ten of the amazing fourteen titles selected for the SIFF 2014 archival category:

With a title like that, and Susan Hayward in the cast, I'm not expecting much underplaying in director Nicholas Ray's modern western. Robert Mitchum may even resort to some nostril flaring as a retired rodeo rider who trains an aspiring rider while becoming infatuated with his wife (Hayward). This one should be a real treat: it isn't available on DVD and the Film Foundation Conservation Collection at the Academy Film Archive is providing a restored print.

I was pleased to see a title from the recently departed director Alain Resnais on the schedule. This mysterious, slow-moving flick has always mystified me. It is the story of a woman at a luxurious hotel who is tantalized and tormented by a man who claims he was her lover there the year before. I've never given much thought to the plot though. Marienbad just pulls me into its vortex and leaves me floating for a while. I'm curious to see what kind of spell it will weave in an immersive theater experience. It will also be fantastic to check out the new 35mm restoration.

An epic, French silent which is considered to be the first great pacifist film. I've never had a chance to see an Abel Gance movie, and I'm looking forward to seeing his work for the first time on the big screen.

My six-year-old will be joining me to check out these classic Chaplin shorts: One A.M. (1916), Easy Street (1917), The Immigrant (1917) and one of my favorites, the comedian's first onscreen appearance as the Little Tramp character in Kid Auto Races in Venice (1914). I'm looking forward to the live keyboard accompaniment by Donald Sosin, as well.

This Chinese silent about a family struggling through poverty intrigues me, because I know so little about it. I'm looking forward to being plunged into something entirely new to me. The commitment to world titles is one of my favorite things about this festival. It truly is "International" in the most thrilling way.

Dirk Bogarde is a not-so-servile servant and James Fox is his unsteady master in this quietly unsettling drama. It features a lush and seductive score by John Dankworth. I've always felt that smoky-voiced vocalist Cleo Laine was also a part of the cast, perhaps as a one-woman Greek chorus, with her rendition of the tragic All Gone which plays over the action. With lyrics by screenwriter Harold Pinter, it is as much a part of the drama as the actors before the camera.

I missed this new restoration from the original negative of the Capra classic when it played at TCM Film Festival this year. It'll be great to have another chance to see it.

Though he's sliding past his pretty boy days here, I don't think I've ever found Peter O'Toole more dangerously sexy than in his role as a film director who offers dubious protection for a man on the run.

Another new print I missed at TCMFF. I'm just as eager to check out the score by Quincy Jones.

This experimental exploration of the many faces of Boris Karloff is the only new film I will be reviewing for SIFF 2014. I'm particularly interested that it is by the Austrian filmmaker Norbert Pfaffenbichler, as I'm always curious to see the foreign perspective on Hollywood.