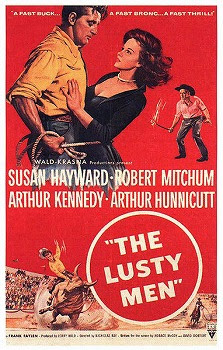 There were so many reasons The Lusty Men was one of the films I was most looking forward to seeing at SIFF 2014. I love director Nicholas Ray, and stars Robert Mitchum and Susan Hayward. I was intrigued by the idea of a modern western, especially one set at the rodeo. And then there was the title: I knew I couldn't go wrong with a name like that. All these elements did melt together into something exciting, but it was a much more intense experience than I expected. I'd heard rodeo life could be tough, but this film showed me why.

The print was a 35mm restoration funded by Martin Scorsese's Film Foundation Conservation Collection at the Academy Film Archive. This was only the second time it had been shown, the first at a previous TCM Film Festival. While I don't object to digital movies, I can't imagine this particular screening being nearly as sensual an experience had it not been on film. I've never appreciated that distinctive grain more, and how soft it made the movie look, from skin to landscapes. I wanted to touch everything.

Not that I wouldn't have wanted to touch some things in this film anyway (wink). Mitchum is Jeff McCloud, a worn-down rodeo star who decides to retire after a nasty run-in with a bull. Feeling nostalgic, he travels to his childhood home, where he meets Wes and Leslie Merritt (Kennedy and Hayward respectively) a married couple who are determined to buy the property. When aspiring rodeo rider Wes catches McCloud's name, he finds him a job at the ranch where he works, and eventually convinces the downtrodden star to teach him how to ride.

Against Leslie's wishes, the couple hits the rodeo circuit, with McCloud along for guidance. He also gets half of Merritt's winnings, a pretty slick deal for a guy who is all advice while his student constantly faces death in the ring. The easy money, fame on the circuit and high rodeo living predictably turn Wes into an ass, no matter what Leslie does to try to keep him in line. McCloud just flirts with Mrs. Merritt, as dreamy about her perfect pot roast as he is her.

Though there are a lot of predictable elements in the drama, they're balanced well. The script has bite, with lots of barbs and snappy comebacks. There's just enough humor to keep things from getting soapy or too heavy. In this world, if you don't like what someone says, you punch them, or dump a drink on their head, and no one thinks much of it. Consequences are for the ring.

Mitchum steals everything and doesn't look like he's trying at all. He's too cool to care, but then he grabs at you because you know he does care, more desperately than anyone. Hayward seems to be wise to this, and rather than tangle with him, she comes as close to underplaying as I've ever seen. She's got some of the sharpest lines though. This housewife is not waiting around for her husband to ruin everything, she's tough, funny and sexy.

The other, more physically brutal drama is in the ring and The Lusty Men plunges right into the rodeo action. Men are tossed from horses, trampled by bulls and dragged around when a boot gets caught in a stirrup. It's scary to watch. You can practically hear bones breaking and flesh tearing. In a tense, but quietly moving scene, Leslie sits on her trailer steps listening while her husband takes a beating in the ring, unable to watch, but ready to run to her man should he need her. You understand why she is so frightened.

I would have shown up for this one just to be a Mitchum or Ray completest, but the film is much richer than that. With a lively supporting cast and everything paced just right, it's a rough, exhilarating ride and a great way to start my SIFF 2014 experience.

Check out my SIFF 2014 Gameplan for more movies to come.