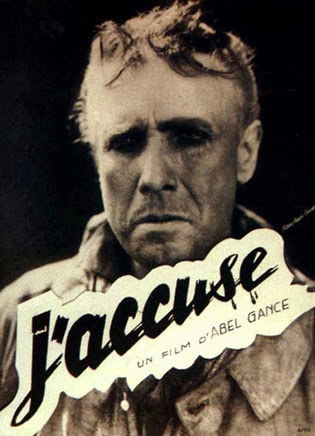 …war is futile. Ten or twenty years afterward, one reflects that millions have died and all for nothing. One has found friends among one's old enemies, and enemies among one's friends.

Called a great pacifist film, Abel Gance's J'Accuse certainly covers its bases as it exposes the ravages of war. Death, rape, post-traumatic stress and other horrors ensure that no one wins once the battle begins. At the center of it all is a gentle housewife, her abusive husband and the poet she loves. This silent French epic played to a packed house on a Saturday morning. I dreaded the one-two punch of a nearly three-hour film about such a devastating subject, but watching it was a remarkable, moving experience.

The digital print was provided courtesy of Netherlands Film Museum, and was restored by Lobster Films. I'm always in awe of the work this company does to protect and preserve silent films. I couldn't believe I was watching a film that was almost 100 years old. The picture quality was even, with light scratches and beautiful contrast. It was good enough that I didn't spend much time thinking about the print; I was able to escape into the story.

I was constantly reminded of D.W. Griffith as I watched J'Accuse, which was made only a few years after the American filmmakers controversial classic Birth of a Nation (1915). Gance seems to have taken Griffith's close-ups, action scenes and intimate flourishes and amped up the artistry of all. While the scope of the film is epic, it is often intimate, moving close to its subjects, catching them in poses and lighting worthy of a portrait.

These moments are juxtaposed with painfully tense battle scenes, parts of them actual footage of US soldiers fighting the Battle of Saint-Mihiel in World War I. You get a real sense of the way fear ripped so deep into these soldiers that they would sometimes stop caring about the danger around them. They had seen the limits of their terror.

The battle scenes are especially devastating because many of the extras Gance used were on leave from active duty. These men knew they would probably die upon return to the front. As it turned out, most of them did. That reality is reflected in the urgency of the director's message.

The three points in the love triangle that forms the emotional center of the movie represent the different ways war can destroy individuals, their relationships and the community around them. While they are well-defined types, they are allowed to be complex and even contradictory. The brute is not all bad; the gentle poet can also be heroic and no one is promised a happy ending because they have fought honorably.

Gance's often repeated phrase "J'Accuse" (I accuse) is directed towards those who have blithely profited from the war, or who have otherwise behaved insensitively and failed to remember the sacrifices made by the soldiers who have fought for their freedom. In the film's most famous sequence, an army of the dead rises up to shame a group of villagers because they have not properly honored their fallen loved ones. It's a chilling scene, one of many that justify the IMdB classifying this film as horror.

While I was fascinated by J'Accuse throughout its lengthy running time, I don't think its story needed three parts to be told. There were a few times where I thought I was watching the end, only to have another scene unfold. Given that this was 1919 though, I'm chalking up some of that to the challenges of learning how to edit an epic film when not many had been made. It's only more evidence that Abel has created something timeless, because it is otherwise beautifully crafted and emotionally wrenching, and it can be difficult to believe this was a pioneering effort in so many ways.

Check out my SIFF Gameplan to read about the other classics I plan to see at this year's festival.