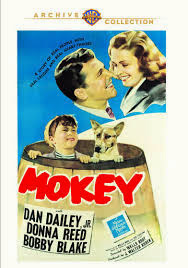 Robert Blake is one of those actors who has experienced so much drama in real life, that it tends to cast a shadow on his film and television work. We know too much about the real man to separate him from the roles he plays. I suppose that's why I had an uneasy feeling watching him play Mokey, a boy who means well, but keeps causing problems for the adults around him. The film is one of three new releases from Warner Archive, along with Revolt in the Big House (1958) and Corky (1972), which explore Blake's early roles.

Mokey began as a series of magazine stories, which were eventually compiled into a book in 1935. They are apparently based on a real boy who had a good heart, but very poor decision making skills.

In the film, Blake is a young boy struggling with his dead mother's absence. He is essentially being raised by the family maid, played by Etta McDaniel, sister of Hattie McDaniel. His father (Dan Dailey) is always on the road for work, and while he loves his son, he clearly does not understand him, or really how to be a parent at all.

One day he brings home a new wife (Donna Reed), who is agreeable, but young and inexperienced as both a homemaker and mother. Contrary to most movies where a child is presented with a new step parent, Mokey is delighted to welcome his new mother and gives her a warm welcome. The problem is that he keeps causing her trouble and she cannot see how desperately he wants to please her.

The two embark on an uneasy relationship, with Mokey even finding himself on a year of probation for his mischief. In over her head, Reed reacts with anger and shame over the reputation she and her stepson are getting among the townspeople.

It doesn't help that Dailey is never around, though clearly often enough, as he and Reed soon have a new baby daughter. When Mokey unintentionally endangers the girl, his stepmother slaps him and asks that he be sent away. This after calling him a dummy several times and basically being impatient and inattentive to the boy on a regular basis. It's a hideously unsympathetic role, but you do feel some of Reed's pain.

Unusually for a film of the time, the black characters come off much better than the white. There's the usual uncomfortable sprinkling of dialect, but Mokey's maid and his African American pals are the most loyal, loving and happy people in the film. They even take the boy in when he runs away from home. It's particularly nice to see Blake's Our Gang costar Billie "Buckwheat" Thomas in a more substantial role.

Overall, I found this to be an uncomfortable film to watch. I wanted so much for Mokey to be given a break, and the way he was abandoned and dismissed by the adults around him was frustrating. Those elements had a rougher edge than in a typical flick of the era with a misunderstood kid plot. It didn't ever feel like the poor kid was truly loved. Even when he ran away from home, his father seemed more inconvenienced than concerned.

I played the film for family movie night, and while it wasn't a hit, my girls did enjoy Blake. He is the best part of the film, a natural, appealing actor and so darn cute with his big, round eyes and sweet demeanor. While I can't quite recommend the film, I did enjoy watching him and the way he interacted with his friends.

As far as whether this film is appropriate for children, it depends on how much you want or need to explain. It is very much of its time, with many now taboo elements such as blackface and spankings, and a very different view of parenting. My kids have seen many older films and have some understanding of these things. Young ones who are not as familiar with the classics may need more guidance.