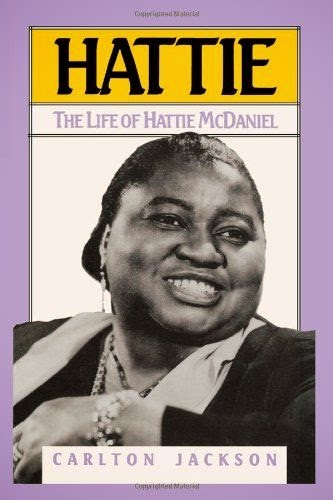 Who was the person behind the jolly, but strong-willed mammies and maids that Hattie McDaniel played throughout her career? I've asked this question for years, usually while watching her steal whatever brief moments she had onscreen. I finally got my answer in Carlton Jackson's illuminating bio. of the first African American performer to win an Academy Award.

McDaniel was one of those people who was born to perform. She was always charismatic and eager to entertain. After winning a gold medal for her dramatic reading of Convict Joe for the Women's Christian Temperance Union in her hometown of Denver, Colorado, fifteen-year-old Hattie decided she'd had enough of school. She abandoned her studies and followed her father Henry, who had his own minstrel show and her singer and dancer brother into the business.

The actress paid her dues in vaudeville before attempting success in Hollywood. It was tough going at first, and sometimes so discouraging that she could not work up the enthusiasm to respond to letters at home. McDaniel found low-paying engagements singing on the radio or stage, but she was forced to supplement her income working as a domestic.

It was in such an engagement, serving as restroom attendant at Club Madrid, that Hattie began to drum up some support for her singing career. She sang and danced so beautifully and energetically while doing her job, that the ladies she served began to demand that she appear on the club stage. When the owner reluctantly gave her a chance one night, she was a sensation. Her tip saucer was overflowing by the end of the evening.

Exposure like this led to bit movie roles, starting with an uncredited part as a servant in The Golden West (1932). While McDaniel never had much to do onscreen, she was admired for her wit on set. This led to a part in the Will Rogers comedy Judge Priest (1934) which she all but stole from Stepin Fechit. She began to build a reputation.

In a role as a rebellious maid in Alice Adams (1935), she reportedly upset some white viewers with her supposedly uppity ways. She was to cause a great deal more controversy in later parts, because she was at her best when she played a woman more together than her employers. Even in her greatest role, in Gone With the Wind (1939), she is the one with the heart and the strongest moral grounding. Ironically, that has not nearly enough for black activists such as Walter White, leader of the NAACP, who criticized the actress, preferring the all-or-nothing approach to racial equality, rather than her gradualistic philosophy.

Regardless of what critics felt about her breakthrough performance as Mammy in Gone With the Wind, that role would ensure McDaniels could make a living in the entertainment for the rest of her life. It would win her the Academy Award and worldwide acclaim. She embraced her mammy image, always grateful for the success it had given her. Beyond the role, she would not find as much work in film, but she found larger and more enduring success, and captured enormous public affection, as the star of the popular radio show Beulah.

In a life of steady professional triumphs like these, McDaniel enjoyed the company of good friends and helped many young performers get started in the business. She loved throwing parties and cooking for her guests. The actress only overindulged in food, but she enjoyed her wealth.

Still, McDaniels was a troubled person, always burdened with guilt over her success, wondering if she deserved it. Continued public pressure over the kinds of roles she played, troubled marriages and poor health would add to her burden. She would tell friends she didn't feel she belonged in the world.

Jackson tells McDaniel's story efficiently in his brief, but illuminating text. While much of the actress's family had died at the time of his research, he was able to speak with several of her friends and co-workers, many of whom offer revealing insights into the woman who was never as jolly as her public persona would suggest.

There are so few full biographies of African American performers from this age; it was interesting to see Hollywood from the point of view of an actress who knew she could only go so far because of her color. McDaniel played an important role in improving conditions for her race, but while Jackson grants the actress her proper place in history, he emphasizes her humanity before the things she symbolized. This sympathetic approach elevates an otherwise straightforward biography.