On DVD: Colleen Moore Does the Charleston in Why Be Good? (1929) 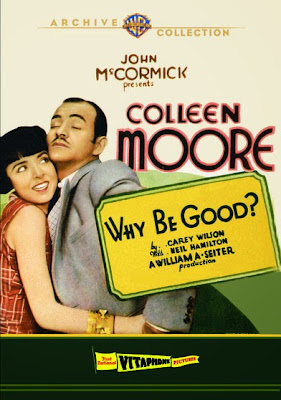 Colleen Moore was one of the most popular stars of the twenties, the very image of flapperdom with her blunt bob and snazzy dance moves, but until now, I knew her best for the lavish $500,000 dollhouse she created long after her career had ended. Today, that impressive structure can be seen in the Chicago Museum of History and Industry. Now, thanks to a new release from Warner Archive, her work as an actress can also be admired.

Why Be Good? comes at the tail end of Moore's acting career. It was her final silent film and the handful of talkies she made afterwards were not sufficiently popular to keep her in the spotlight. Already wealthy from wise investment of her astronomical salary, the savvy star decided to call it a day and busied herself with marriage and raising her step children.

For many years it was thought that the Vitaphone soundtrack was all that remained of the film. Archivists will talk though, and it was eventually found that a print did exist. After a 10-year restoration effort, it was recently screened to audiences for the first time in 85 years at the Film Forum in New York City. As much as I would have loved to have seen this fun film with an audience,I had a blast checking it out on DVD.

Though this slightly plotted bit of frivolity was met with critical shrugs upon its release, it now offers an amusing and fascinating look at flaming youth from a 1920s Hollywood perspective.

It is the story of Pert Kelly (Moore) a high spirited young woman who puts on a wild act to impress the boys, though she is really a "good girl" just out to enjoy herself. One night, as she wriggles out of the overenthusiastic embrace of an oily millionaire, she catches the eye of the wealthy young Winthrop Peabody, Jr. (Neil Hamilton). Out with his pals, he is savoring his last night of freedom before he starts work as head of personnel for his father's department store which, of course, is where Pert works as a salesgirl.

Beginning with that night of flirtation, the two connect, canoodle, quarrel and make up in a perfectly predictable rhythm. However, the film compensates for its lack of surprises with loads of charm. As the plot is so lightweight, there's plenty of time for parties: flappers work cloche hats and swinging dresses, frolicking in a posh Manhattan apartment with their amorous beaux.

On the other side of town, a frenzied Charleston contest heats up at the Trucker's Ball. The winner of that contest is the astoundingly fast-footed Pert. She sips champagne out of her trophy cup, but stays just sober enough to maintain her honor.

When her sophisticated act proves to be too good, Pert must prove to her young millionaire that she isn't going to lay a busy sexual history on him after they marry. Though she is undoubtedly aware that there is a double standard at play here, she indignantly, and effectively shames him for his suspicions.

While there's a dip in the action as Junior and his father have a lengthy debate about Pert's "purity," for the most part things move along at a steady clip.

Moore is a bit long in the tooth to be a "good girl" living at home with her parents, but she has plenty of youthful vigor nonetheless. At first she just seemed like a slightly dorky version of Clara Bow, who actually was a bit of a threat to the already established Moore in the early twenties. It took me a while to accept her on her own terms.

She grew on me though. Moore was the smart flapper. She's the one you want in your corner, because you know she's not going to become an alcoholic or a coke fiend and slip into the gutter. Here was a party girl with an eye on the future. Live it up, but keep your virtue and save your pennies.