On DVD: Albert Finney Goes Psycho in Night Must Fall (1964) 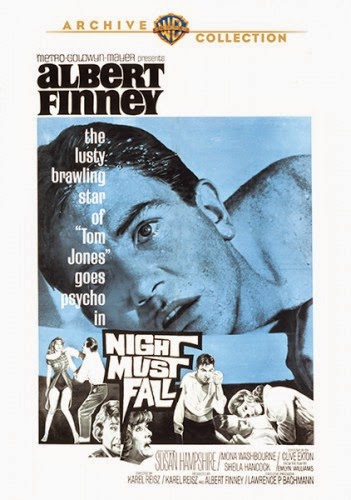 Coming as it did after Albert Finney's lively turn in Tom Jones (1963), it's not shocking that the actor's darker role in the bleak Night Must Fall (1964) did not make a big splash upon its original release. In fact, the contrast must have been quite startling for audiences. Finney was a bit too good at demonstrating his versatility, but as can been seen on a new DVD release from Warner Archive, this is not a film to be dismissed.

The psychological thriller, about a murderous psychopath who descends upon a country estate, began life in 1935 as a stage play by Emlyn Williams. It was then filmed twice by MGM, first with Robert Montgomery in 1937, which reflects its stage roots much more than the 1964 Brit version.

Finney is Danny, a Welsh bellboy with overpowering charisma who in various ways seduces three women living in a magnificent home. When he enters the scene, he has already impregnated the maid (Sheila Hancock), and will not commit to marrying her. He quickly charms the wealthy widow (Mona Washbourne) who owns the house and she insists on hiring him as her companion. Though her niece Olivia (Susan Hampshire) is more skeptical of the man frolicking in the yard with her aunt, he eventually wins her over as well.

Each of the women notices that there is something off about Danny, though Olivia is the only one to be deeply disturbed at first. The others attempt to ignore what frightens them about him, too enamored of his flirtation to reject him. His rude, aggressive behavior is often misinterpreted as charm, but he has a manic energy that threatens to run him off the rails. There's always the feeling that he'll explode and rip someone's head off.

The audience fears this because in the first scene he actually is enthusiastically chopping a woman's head off. We're spared the sight of that, but as he trots through a grassy field carrying a headless corpse, there's no mystery as to what happened.

Perhaps the thing that was most repulsive to audiences who saw this horrifying opening after Tom Jones is that Finney bounces around with an enthusiasm similar to that character, but with all the warmth drained away. It was as if Jones had turned on them, all his happy wrinkles pressed into cold, emotionless flesh.

Finney has Danny speak like a deranged ventriloquist's dummy, using his familiar staccato delivery to horrifying effect. He seems possessed, and the scary thing about it is that just about everyone around him thinks it's hilarious. The performance is over-the-top, and the music has an unfortunate way of needlessly punctuating Finney's flailing with sensational blasts of sound, but in a film that can drag in spots, sometimes that punch of energy is welcome.

The cast is good, but definitely stuck in the backseat. Washbourne is especially adept at tapping into the widow's vulnerability, but Finney is what makes this film remarkable. His take on the character is not quite as finely tuned as Robert Montgomery's in the more sedate 1937 version, but it is very much of its time and for that reason entirely appropriate.

The Warner disc shows off the strangely dreamy photography to great effect and the production is smoothly executed by Finney's Saturday Night and Sunday Morning (1960) director Karel Reisz. This film deserves a wide audience. If it had been released at a different time, it might have even been a minor classic.