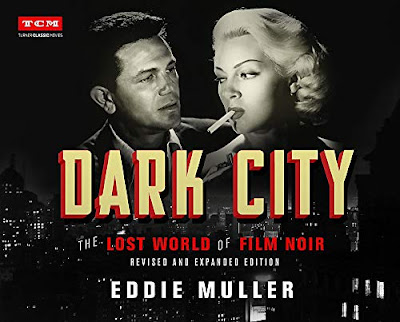 Dark City: The Lost World of Film Noir
Revised and Expanded Edition
Eddie Muller TCM/Running Press, 2021
TCM Host and Noir City Festival and Film Noir Foundation founder Eddie Muller’s Dark City: The Lost World of Film Noir has long been a favorite among fans of the bitter little world in this popular movie genre. However, a lot has changed since its original publication in 1998. This expanded version of the book has new chapters and restored photos that fill out its dark world.
Perhaps most significantly, many films mentioned in Dark City that were unattainable when the book first came out are now readily available, some of them thanks to the funding and advocacy work of Film Noir Foundation. The audience for classic noir has also grown, with a niche interest growing into a widespread fandom. That growth is recognized with these new images and perspectives.
The concept of viewing noir as a city with different shady neighborhoods works well as an organizing concept for the book. Most films in the genre fall easily into a handful of categories, from journalism and prison, to psychopaths and femme fatales. Muller alternates between discussing great films and profiling key actors and creators in noir, with a mix of historical curiosity and gumshoe cynicism.
While the text is a great primer in noir and sure to be of interest to even longtime fans of the genre, the real stand-out in this edition is the gorgeous photos and posters. The way these images are arranged and presented is stunning, with vivid color, rich black and white, and some photos as big as a full page. It’s a beautiful book.
There’s a bizarrely alternating tone of feminism and chauvinism that can be unsettling (such as when referring to scenes with “pizzaz” Muller then immediately describes a woman getting knocked out, though he also demonstrates strong advocacy for female creators in the genre) and the long hardcover design makes this what one of my college professors would apologetically call, “not a lying down book,” but overall this is an essential tribute and introduction to film noir. The additions enhance and solidify its status as a classic.
Many thanks to TCM for providing a copy of the book for review.
Posted by KC