On Blu-ray: MGM's Galaxy of Stars in Ziegfeld Follies (1945) 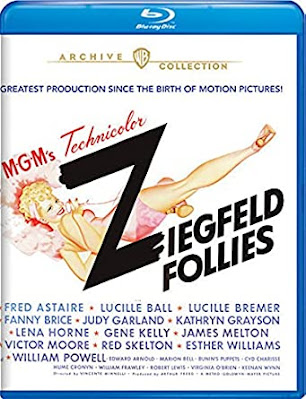 Ziegfeld Follies is a mixed-bag. Full of musical and comedy acts meant to emulate the feel of the legendary Broadway version of producer Flo Ziegfeld’s Follies, it alternates between magnificence and moments that elicit indifference. Fortunately the episodic nature of the film allows the viewer to easily curate the viewing experience, because the best parts of this film are among the most memorable in MGM history. I recently revisited the movie on a new Blu-ray release from Warner Archive.
The film begins with William Powell as Ziegfeld (reprising the role he played in the biopic The Great Ziegfeld [1936]) in a Heaven that looks like a plush penthouse. He reminisces about his magnificent career in a scene which segues into a recreation of his show time milieu in 1907 using what is billed as Bunin’s Puppets. While I would normally find a cast of marionettes unsettling, here it is a charming way to begin, because the scene captures the detail and the feeling of the era so well.
Then begins a series of hits and misses: the former typically the song and dance numbers and the latter the comedy sketches, which haven’t aged well, despite being populated with actual Ziegfeld star Fanny Brice and typically reliable comedians like Victor Moore and Keenan Wynn. Even Judy Garland falls a little flat in her musical comedy number A Great Lady Has an Interview though it's fun to watch her because she seems to be having a blast.
The musical numbers more than make up for the comedy. Here’s to the Ladies features the remarkable sight of Lucille Ball in pink, looking haughtily beautiful and pretending to crack a whip at a group of chorus girls dressed as glittering wild cats. Also magnificent is Lena Horne singing Love in the film’s most fully realized number, a gorgeously-conceived triumph of costume, set, song, and sultry star. The film is also memorable for the Babbitt and the Bromide number in which Fred Astaire and Gene Kelly dance together in their first screen pairing.
I was less engaged with the rest of the musical numbers, though they all have a certain appeal and that reliable MGM quality. Esther William’s A Water Ballet is lower key than the over-the-top productions in her films, though it is pleasant to watch. Two numbers featuring the dancing duo of Fred Astaire and the proficient, but passionless Lucille Bremer: This Heart of Mine and Limehouse Blues, are haunted by the many dancers better-suited to Astaire as a partner.
It’s a gorgeous, entertaining film if you have the patience choose the moments that suit your tastes and a must-see for fans of MGM musicals.
Special features on the disc include the featurette Ziegfeld Follies: An Embarrassment of Riches, a Crime Does Not Pay short The Luckiest Guy in the World, the cartoons The Hick Chick and Solid Serenade, a theatrical trailer and a selection of audio-only outtakes and rarities.
Many thanks to Warner Archive for providing a  copy of the film for review.
Posted by KC