On Blu-ray: Greer Garson and Walter Pidgeon in Madame Curie (1943) 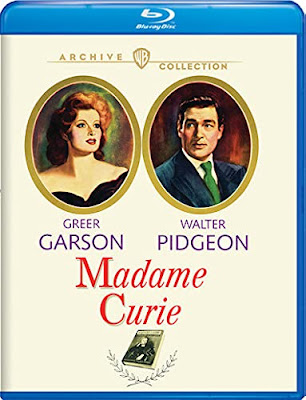 Madame Curie (1943) gives the biopic of the famous scientist and her husband Pierre the MGM treatment, with sentimental strings, kindly professors, and lofty announcements to the stars, but it is also diligent in its approach to the work and the relationship at its core. I recently watched the film on a new Blu-ray release from Warner Archive.
Movies rarely focus on labor with the detail and intensity of Madame Curie. It helps that the real life discoveries that the Curie’s made were thrilling enough to translate to great drama. Marie Curie’s drive to isolate what she would eventually call radium is what is told of the story though; the slow death to follow via poisoning from the elements of her work is yet to come.
Greer Garson and Walter Pidgeon are a good fit as the famous married scientists. They easily portray the strong chemistry of these people who come to love each other because they are in harmony when it comes to work. No one is at home waiting on the other; it’s all of one piece. It’s also rare and fascinating to see a screen romance that develops from a base of mutual intellectual stimulation.
Most of the supporting roles are essentially cameos, with brief if effective appearances from C. Aubrey Smith, Van Johnson, and Margaret O’Brien. As Pierre’s parents, Henry Travers and Dame May Whitty are charming and have a bit more to do. Baby-faced Robert Walker also stands out for the puppy-like eagerness of his turn as Pierre’s laboratory assistant.
The screenplay by Paul Osborn and Paul H. Rameau is commendable for finding dramatic tension in tedious lab work. I remember seeing this film as a child on television and having no idea what pitchblende, Thorium, and Uranium were, but feeling very excited about it all.
Nominated for seven Oscars, it didn’t take home any trophies, but Madame Curie is a solid classic and great entertainment.
Special features on the disc include a theatrical trailer and the more documentary-like take on the story of the discovery of radium via the Pete Smith Specialty Short Romance of Radium.
Many thanks to Warner Archive for providing a copy of the film for review.
Posted by KC