On Blu-ray: In the Good Old Summertime (1949) Reimagines a Lubitsch Classic 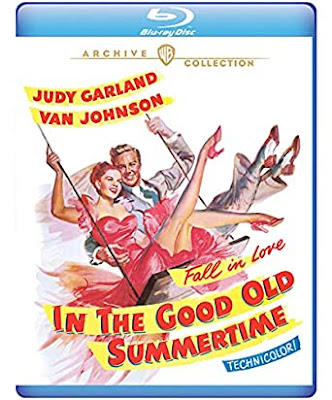 This musical remake of Ernst Lubitsch’s The Shop Around the Corner (1940) is a rosier take on a tale of a couple who meet ugly, but fall in love. It trades in the bleaker elements of its inspiration for a more sweetly nostalgic take on the story of pen pals who are in love on paper, but rivals at work. I recently watched the film on a newly-release Blu-ray from Warner Archive.
As the battling lovers-to-be Van Johnson and Judy Garland don’t have much chemistry, though they’re pleasant enough. However, it was interesting to see a supporting cast full of seasoned senior characters: that popular grown toddler S.Z. “Cuddles” Sakall, Spring Byington, and Buster Keaton in his last role for MGM. In the final scene baby Liza Minnelli also makes her screen debut playing, appropriately enough, Garland’s daughter.
Perhaps the smartest change in this adaptation was to move the action from a general gift shop to a music store. It’s the perfect way to slot in a couple of engrossing numbers featuring Judy Garland. While this is a modest entry in her filmography, Garland glows, Technicolor was made for her kind of beauty. Her numbers in the music store are especially satisfying because they spotlight how remarkable her talent was without the adornment of big production numbers.
The action flags in the middle of the film, perhaps a few more musical numbers would have helped, though a sharper script and better paired leads would have really done the job. Ultimately it is an entertaining film that will appeal most to particular fans of the stars gathered here, because they each have their moment to shine.
Special features on the disc include a fascinating pair of FitzPatrick Traveltalks shorts, Chicago the Beautiful and Night Life in Chicago, which highlight the magnificence of the city decades ago. There’s also a trailer and an introduction by Judy Garland biographer John Fricke.
Many thanks to Warner Archive for providing a copy of the film for review.
Posted by KC