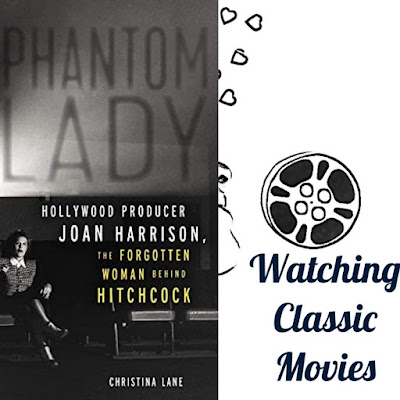 Joan Harrison was one of only three women producing films during the studio age. Also a talented screenwriter, she was instrumental in helping Alfred Hitchcock develop his style on films including Rebecca (1940) and Foreign Correspondent (1940), in addition to his long-running television shows. She was key in molding the film noir genre with movies like the edgy for their time The Phantom Lady (1944) and They Won’t Believe Me (1947), and she also pushed boundaries with several television dramas.
I talked about this remarkable filmmaker with my guest, Christina Lane, author of Phantom Lady: Hollywood Producer Joan Harrison, The Forgotten Woman Behind Hitchcock.
The show is also available on Spotify, PocketCasts, Breaker, Stitcher and Radio Public.
Watching Classic Movies podcast is also now available on Apple Podcasts! If you are enjoying the show, please give it a 5-star review.
Films Discussed:
Nocturne (1946)
The Phantom Lady (1944)
The Strange Affair of Uncle Harry (1945)
Ride the Pink Horse (1947)
They Won’t Believe Me
Rebecca (1940)
Young and Innocent (1937)
Television Shows Discussed:
Janet Dean, Registered Nurse
Journey to the Unknown
The Most Deadly Game
Next episode posts Wednesday, November 10. Stay tuned!
Posted by KC