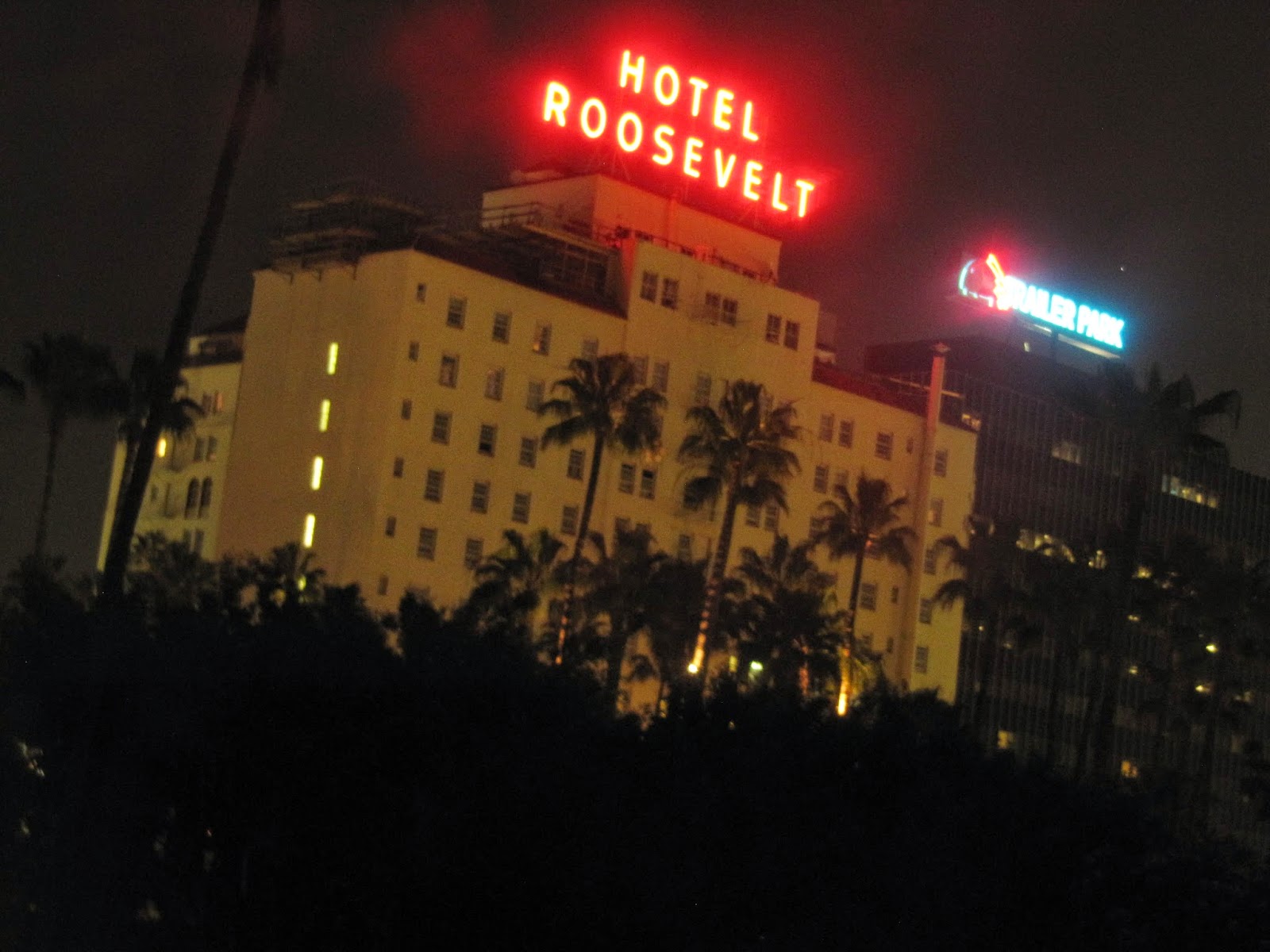 I took it much easier the last two days of the festival, watching three movies each on Saturday and Sunday. While my crazy binge-watching Friday was a lot of fun, I knew I'd go crazy if I kept up that pace. It was nice to give the movies a little breathing room these last two days of TCMFF.

After Maureen O'Hara made her appearance before this Oscar-winning classic, several members of the audience left, apparently having gotten what they came for. I'm glad I was not one of them, because while I was shivering under every layer of clothing I could find, it was worth braving the frigid temperatures in the El Capitan Theater to see this deeply satisfying film.

When you tell the story of a coal mining town, you know that there will be tragedy. Ford offsets the inevitable heartbreak with the story of a strong, warm family surrounded by culturally rich, if occasionally socially stifling community.

It is the perfect film to honor O'Hara, who is simultaneously strong, weak, regal and humble. I couldn't believe she pulled off a performance this nuanced so early in her career. She was truly born to perform.

The rest of the cast is also amazing, from the sympathetic young Roddy McDowall, to the hardy, but loving Sarah Allgood and Donald Crisp. It was impossible not to get choked-up watching this remarkable film after seeing an equally emotional O'Hara in person.

I desperately needed to lighten my mood after the one-two emotional punch of seeing Maureen O'Hara and watching How Green Was My Valley. Fortunately, my last two movies of the day were much lighter.

As I wrote in my Stars post, the possibility of seeing Kim Novak was one of my primary motivations for attending TCMFF. I would have watched her in anything, but how fantastic that TCM screened my favorite Novak flick: a sexy romance about a witch who puts a spell on a hapless publisher.

It's hard to believe Novak and Jimmy Stewart made this movie the same year they co-starred in Vertigo. Beyond the theme of a man falling under the spell of a mysterious woman, the two flicks have very little in common. I love how the fun of the magic tricks and the top notch cast, including Elsa Lanchester, Ernie Kovacs, Hermione Gingold and a very young Jack Lemmon, give the lightweight comedy an extra punch.

With my spirits lifted by Novak and Stewart smushing noses, I sailed into yet another lively film, the George Cukor-directed classic with an all-female cast (including the animals!). The screening was in the El Capitan, which is as I mentioned before the chilliest TCMFF venue, but still one of my favorites because of the onstage organ which is played with great enthusiasm before each movie. I never get tired of seeing that enormous instrument being lowered beneath the stage before the movie starts.

Anna Kendrick introduced the film with Ben Mankiewicz. It was fun to hear of her budding obsession with The Women as a twelve-year-old, but I didn't love all the f-bombs she was dropping. I mean, I've got a foul mouth, I can't judge there, but it seemed out of place at TCMFF. Still, she was a lively interview and provided a decent introduction to the film.

This was the point in the festival where I could not get through a screening without a catnap at some point, and at 133 minutes, this was a long comedy. Still, I laughed at every joke, even if I had to wake up to do it a couple of times. If anything, this movie gets funnier every time I see it. I don't know if there has ever been a cast so on top of their game as this one. Comedy is hard, but you wouldn't think it to look at these ladies.

Though I had hoped to start the final day of the festival with Sunday in New York (1963), I knew I'd have a nervous breakdown if I didn't get a little extra sleep. I think I made the right decision. The rest of the day was lovely and, being the end of TCMFF, very poignant.

I was so happy when this lesser-known Ginger Rogers comedy was announced as a TBA re-screening. It ended up being one of the most pleasurable discoveries of the festival for me. This is mostly because I adored Rogers' dry, understated delivery. It was a clever script and she laid out those perfect lines as if she never had to put any thought into them. Like that girl who always fell asleep in the back of your high school Spanish class, but somehow managed to get an 'A' anyway. I'd love to see this one again.

The main draw for catching this late-sixties flick was seeing Alan Arkin in person. While I'd seen the movie before, I didn't remember being more than mildly impressed. I think I must have been too absorbed in comparing it to the Carson McCullers book, which I'd read right before my first viewing, because this time around I was mesmerized by Arkin's performance as a lonely deaf-mute.

I've seen thousands of films, and I can say without hesitation that Arkin's is one of the most effective performances I've ever seen. He understands Singer's heartache, the conflict he feels between his good nature and his increasing frustration at never getting the care and attention that he lavishes on others. I had to duck out early to catch the Great Gatsby screening, so I missed the ending. Remembering the devastating impact it had on me many years ago, I was almost glad to not have to deal with it on this already emotional last day of the festival.

I've wanted to see this noirish take on the classic F. Scott Fitzgerald ever since I missed a screening of the film at the Seattle edition of the Noir City festival a year or two ago. When it conflicted with the screening for How Green Was My Valley, I thought I'd lost my chance again. Oh how I love TCM for the TBA idea! The second screening of this extremely rare film was my last of the festival, and because I'd wanted to see it for so long, I felt it was the perfect way to close out an amazing four days.

Alan Ladd's son David was interviewed before the movie began. The actor and producer is as handsome as his dad was, and even has the same perfectly-proportioned short stature. While he was a baby during the production of the film, Ladd Jr. knew how important playing Gatsby was for his father, because the character came up from nothing just like him. Ladd Sr. fought hard for the role, and while it wasn't a financial success, it is a fascinating film.

I don't know what it is about Daisy, why this part is so hard to cast, but I think Betty Field may have offered the worst interpretation yet in this version. It's painful for me to write that, because I adore Field. Ladd was right to want Gatsby so badly though, he's perfect in the role: vulnerable, but also clever and determined. I thought Shelley Winters and Howard Da Silva were great as well, perhaps my favorite renditions of the hapless Wilsons.

Other standouts: Elijah Wood Jr. for once not playing a squirrely hood, and shining in a sympathetic role, Barry Sullivan hitting all the right notes as the insensitive, but clever Tom Buchanan and MacDonald Carey, whose deadly-dull screen persona works for him brilliantly in his role as Nick Carraway.

This is not necessarily a good adaptation of the book, but as my clever seatmate noted, a very strong interpretation of the story. I enjoyed it very much and hope to see it again soon.

More to come! The Jerry Lewis hand and footprint ceremony and an overview of my TCMFF experience.
Posted by KC