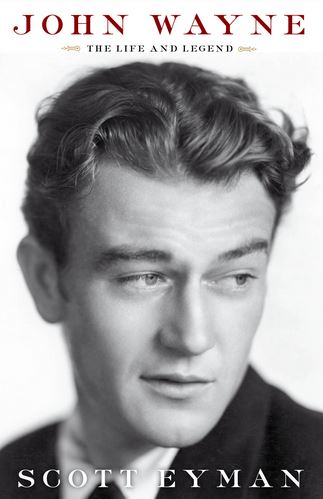 I've always admired John Wayne's performance in the corrupt cop crime flick Brannigan (1975). It's not even close to his best movie, Wayne admitted that himself, but it demonstrates beautifully what made him great. Here he is in poor health, jumping into a new genre to juice up his image, and he owns it.

I especially love a scene near the end where he runs up a flight of stairs and storms into an office, out of breath, literally holding onto the door jamb for support. He breaks into this huge grin and, in that unmistakable cowboy drawl, says "knock knaaawck" to the villain. It's a great movie star moment. His charisma trumps every challenge the production, and life, has thrown at him.

Everything about John Wayne was and is big. This is a man with an airport named after him, who elevated and became the face of the western and who was for many a symbol of America itself. Even people who don't care for the kind of film he made, or who loathe his unyielding conservative politics, loved and continue to love him. If he didn't dominate with his handsome face and 6'4" frame, his charm and determination took up the slack.

In his scrupulously detailed biography of Wayne, Scott Eyman unpeels the many layers of this simultaneously complex and straightforward legend. He captures every aspect of his life, from the personal to the blindingly public.

An impressive number of interviews with family, friends and co-workers lend an added richness to the better-known details of Wayne's life. These reminisces can be repetitive, you hear over and over about the screen cowboy's remarkable strength, temper and passion for playing, and sometimes cheating at, chess, but the overall effect is of establishing, and then reinforcing, the essence of the man.

Unpretentious, and gifted with a common touch, Wayne never forgot his modest beginnings in Winterset, Iowa. He came up through the movie industry from the bottom, and knew very well what it felt like to support the stars. As a college student, he made tuition money as a prop man. This led to a series of bit parts, and a ten year run as the star of cheapie western serials, what Wayne called the television of his day.

Cranking out flicks six days a week was grueling. Wayne was making a living, but he was ambitious. A friendship with director John Ford led to his casting the young actor in Stagecoach (1939). That was all it took to make him a star in a genre he would continue to mold for an entire career. Wayne would be forever grateful to Ford for his belief in him. He would take abuse from the director with a nonchalance that stunned his co-stars and crew members, who were outraged on his behalf.

One of the most common claims made about Wayne is that he wasn't much of an actor, because he always played himself. Eyman concedes that the star did craft a persona which suited his values and reflected much of his true personality, but also shows how that was simply a starting point for a diverse group of characters. The real Wayne was rarely obscured by his roles, but he worked hard to craft distinct performances with a combination of skill, strong work ethic and an instinct for knowing what worked on the screen.

Wayne may have been born to perform, but he was a disaster as a businessman. He lost a few fortunes until his son Michael Wayne took over his affairs and steered his production company Batjac to long-term success. The details of his business affairs weigh down the narrative a bit, but overall the story of how the Duke maintained control over his career and enduring respect in the industry is unusual and fascinating. Not many stars were able to steer their own projects the way he did.

Eyman packs his text full of stories of Wayne's daily life, giving a good feel for what it was like to be in his presence, something he actually managed himself before the actor's death. Some are elaborate, others just brief moments. He weaves these elements together well, crafting a portrait rather than just throwing together juicy tidbits.

You can see the way Wayne's persona remained the same in essence, but was subtly altered throughout the years, adapting to changes in his life and the world around him. He didn't always adapt well, but because he was sensitive to other people and their reactions to him, he never totally lacked self-awareness. It is this mixture of down-to-earth compassion and personal complexity that made him intriguing to his audience and is why he is admired to this day.

Many thanks to Simon & Schuster for providing a copy of the book for review.