TCMFF is quite a starry event. You can expect to run into famous people everywhere. Tippi Hedren in the restroom of the Roosevelt Hotel. Leonard Maltin walking down Hollywood Boulevard. Illeana Douglas, Robert Osborne and Ben Mankiewicz seemed to be everywhere.

It was exciting to see these glamorous faces, but without a doubt, the guests that drew the most interest were the legends from the classic age of Hollywood. In their special appearances, these stars inspired laughter, made tears flow and all demonstrated that they still knew how to mesmerize a crowd.

Here are the legends I was fortunate to see at this year's festival: 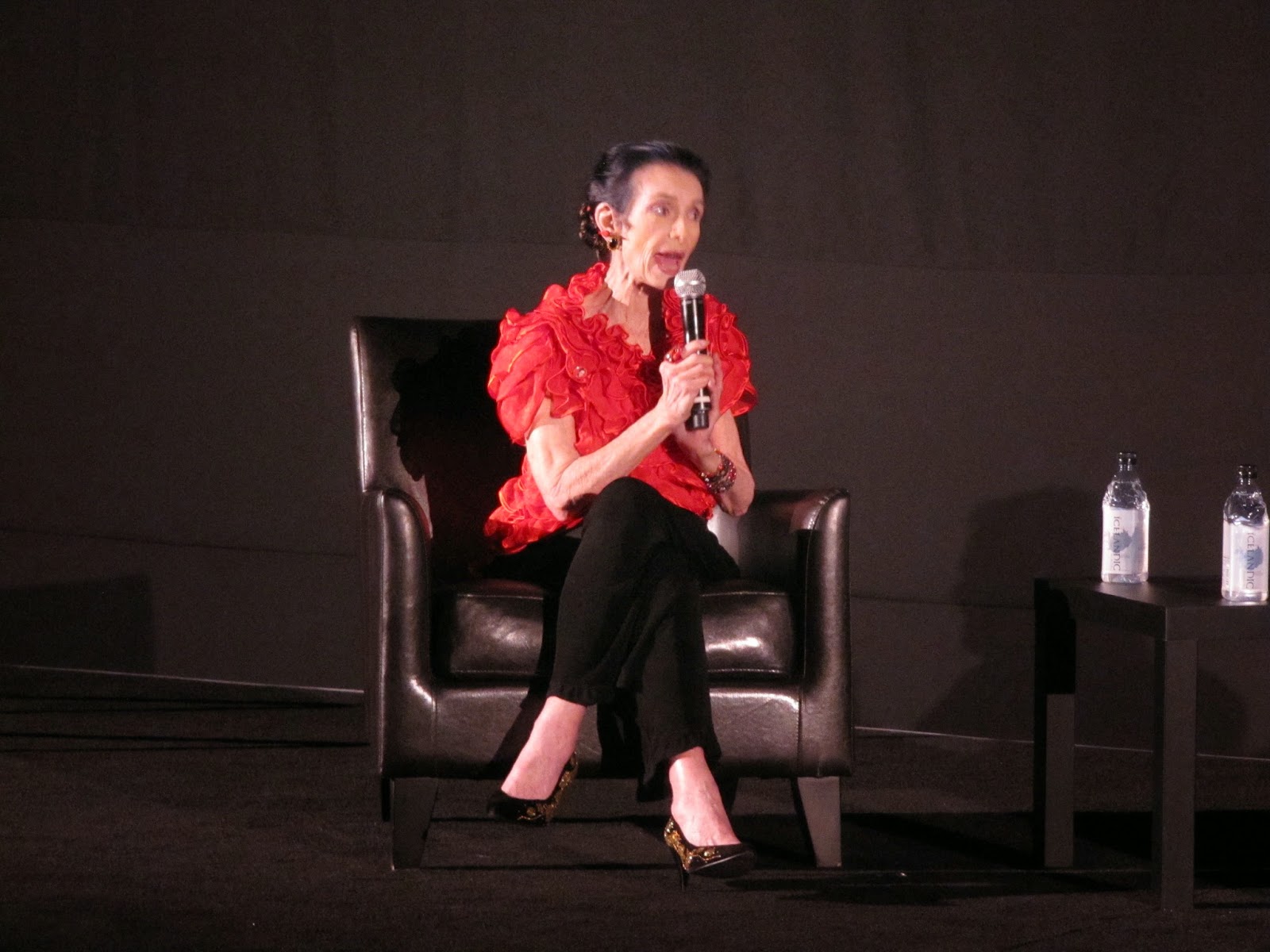 Day two was my busiest at the festival, and the highlight was seeing Ms. O'Brien before a screening of Meet Me in St. Louis (1944) in the gorgeously-restored Graumen's Chinese Theater (yes, I know it's the TCL Chinese Theater officially, but not in my heart). The former child star was the most enthusiastic guest I saw at TCMFF. Dressed impeccably, and looking very hip with her silver nose stud, O'Brien hardly needed to be interviewed. She plopped down on her seat, feet dangling in the air, and began to tell stories. She still moves her head from side to side in that charmingly mannered way she did as a child, and her voice has kept its girlish warmth. It looked like she would have loved to stay and chat more, which I'm sure would have delighted the audience! 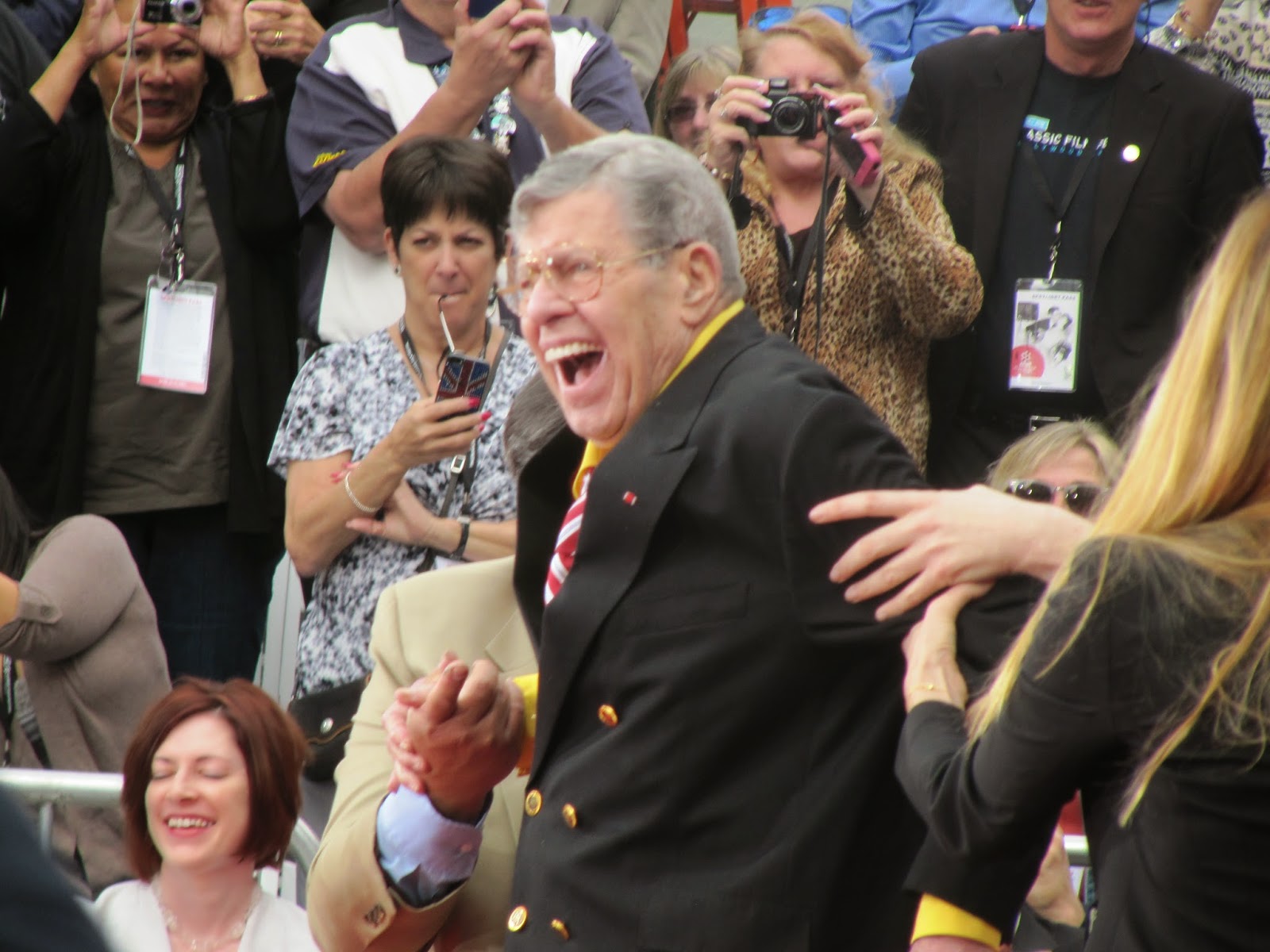 While day two was the most overwhelming schedule-wise, day three was the most emotional for me. This is because I saw three legends of the silver screen in person, something I never could have imagined happening to me as a teenage film fan mainlining Bette Davis movies. The coolest by far was seeing Jerry Lewis put his hands and feet in cement for the courtyard of the Graumen's Chinese Theater. As a new fan of Lewis, I was overwhelmed to see this legend in person. He still knows how to entertain a crowd, clearly born to it. I've got a lot more to say about this special morning, so I'll share the rest in a future post. 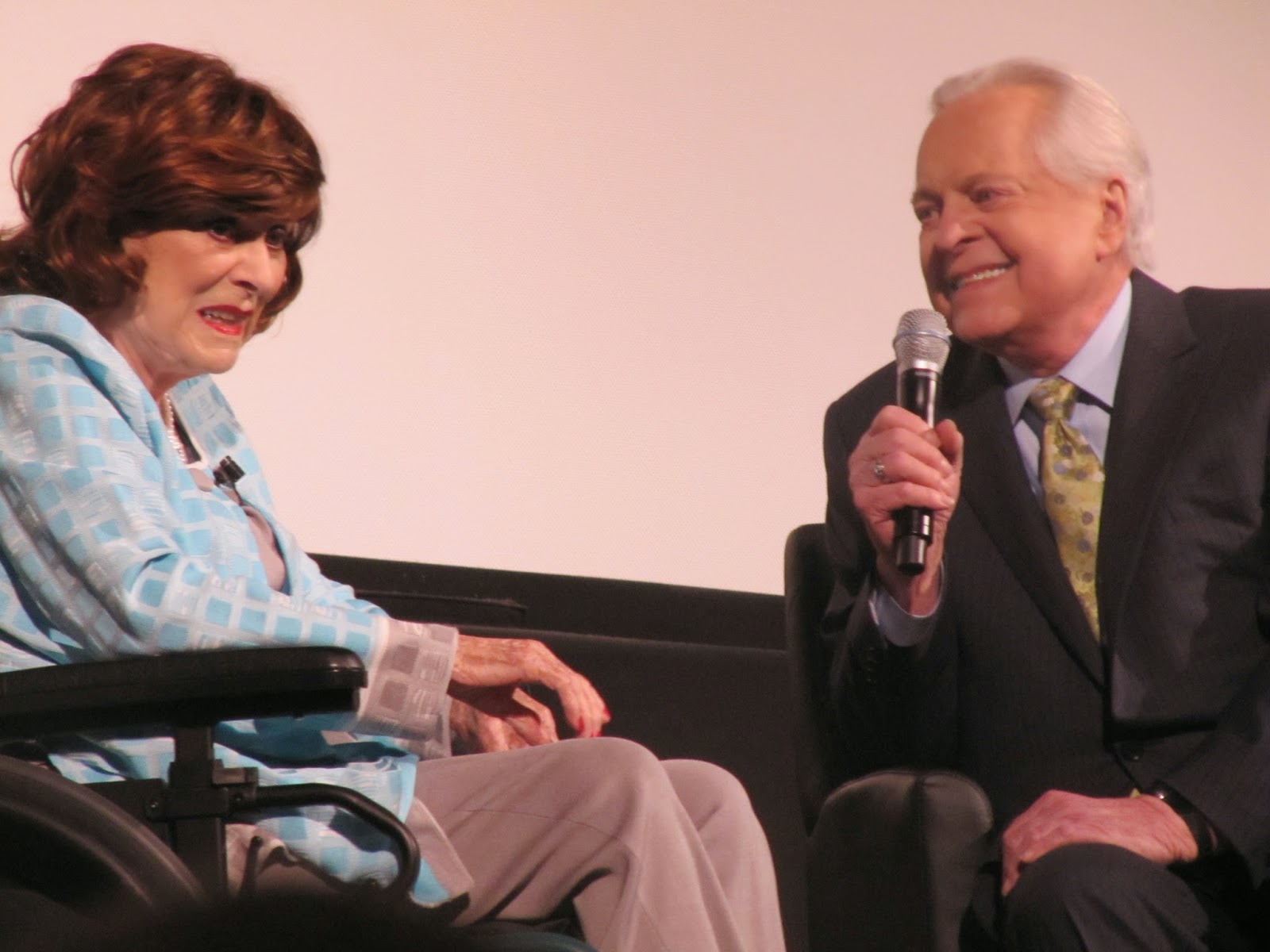 After a rare sit-down meal with a bunch of great bloggers, a few of us ran to wait in line at the El Capitan to see Ms. O'Hara before the screening of How Green Was My Valley (1941). One of the most sought-after guests for the festival, fans were lining up outside the theater two hours before show time. And it was so worth it! The Irish star is still sharp, sassy and clever.

O'Hara, now in a wheelchair, was visibly overcome as she was wheeled out to an enthusiastic standing ovation. She was in tears many times during her interview with Robert Osborne. While touched, at one point she told the crowd, "don't be fooled into thinking I do magical things," which inspired Osborne to tell her that she certainly did.

With a heavy emphasis on spirituality, O'Hara discussed her life philosophies while giving encouragement and advice to the crowd. She said, "all of you do what you're supposed to do, better than you are supposed to do." The actress was also concerned when she heard a cough in the audience, she insisted that the woman stand up and wished her good health. Oh to be that cougher!

It wasn't all emotional though, this dame is funny. When Osborne opened the interview by asking about Ford, O'Hara snapped back, "I thought we were here to talk about me!"

At the end of the interview, while O'Hara received another standing ovation, she was clearly trying to stand up to give thanks to the crowd. However, despite appearing to speak about it to the TCM staffer who was there to push her wheelchair, it didn't happened. That was probably for the best, though it was touching to see how much she wanted to pay tribute to her fans. This appearance was the high point of the festival for many. 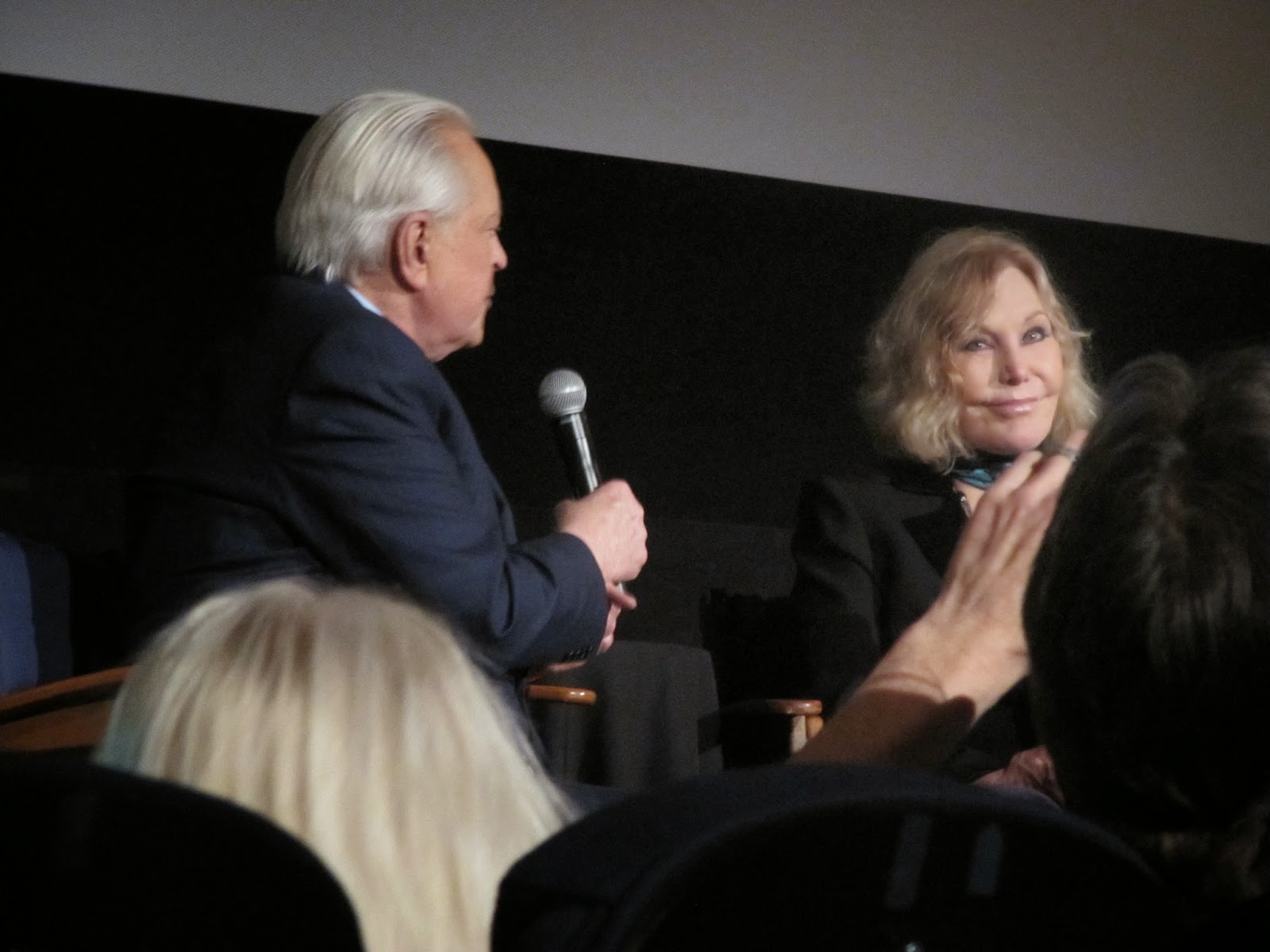 As a huge fan of Kim Novak, seeing the star was on the top of my list. That she had appeared at the festival before, and was likely to do so again, was one of the factors that motivated me to attend TCMFF this year. When I found out she was going to be interviewed before my favorite Novak flick, Bell, Book and Candle (1958), I couldn't believe it!

While Novak has had rather extreme plastic surgery, she is still very alluring and magnetic. With her husky voice and mesmerizing eyes, she brought plenty of glamour to the stage. Always known to speak her mind, I wasn't surprised that she addressed what interviewer Robert Osborne called, "the elephant in the room," the star's controversial appearance at the 2014 Academy Awards ceremony.

Novak called the negative feedback she received what it was, "it's bullying and we've got to fight back." She added, "we've got to stand up to these bullies, we've got to be stronger than they are." When the crowd applauded her honesty and bravery in addressing this clearly painful issue Novak smiled and said, "I've got to confess, I feel like I'm home with you."

Feeling very moved by what Novak had said, when she went back up the aisle I told her, "you show 'em Kim!" She responded, "don't forget to stand up!" And I most certainly will Ms. Novak! It was one of my high points of the festival to exchange words with this amazing woman.

This was my favorite interview of the festival. I wanted to see Arkin so I could enjoy his butter-smooth voice in person, and yes, that was dreamy, but he was also a fascinating person. Everything that comes out of his mouth is quotable.

When interviewer Ben Mankiewicz joked to Arkin, "I know you don't care about awards, but I do, because I'm more shallow than you. Which is readily apparent," the actor launched into an interesting tirade about industry awards. Using his Oscar nomination as an example, Arkin said that he was pleased by the nomination, because it was a surprise and he enjoyed being honored with his peers and promoting his film. He was less thrilled when he won, because he didn't like the implication that he was better than the other nominees noting that, "isolation is bullshit," when it comes to honoring great performances.

The whole interview was so interesting, and Arkin was so darkly charismatic, that I almost didn't want the film to begin. Here are some more gems from this intelligent actor:

3/4 of [current] American films are made by draftsmen or engineers.

There's something kind of ennobling in not knowing the answer to something.

[Improvisation] is at the core of everybody's life, whether they like it or not.

I have a dread of failing as a human being, not as an actor.

I still can't believe I got to see all of these amazing performers in person. They were all so charismatic, clever and engaging--truly born to entertain.

Coming up next: TCM Film Festival, The Movies


All images belong to Classic Movies except where noted.
Posted by KC